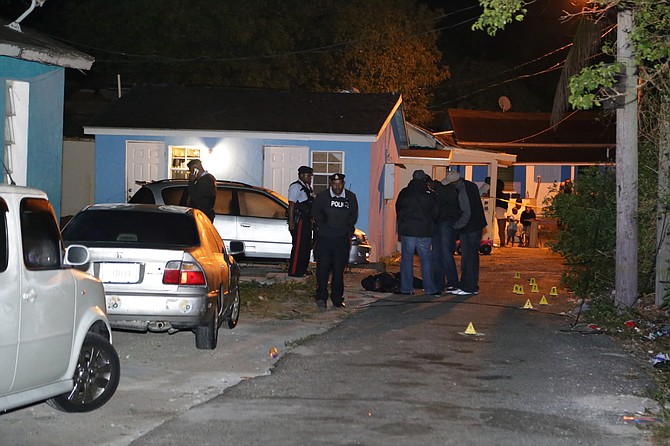 Police at the scene of the fatal shooting of a young man on Williams Lane early on Wednesday. Photo: Terrel W Carey/Tribune Staff

THE murderous start to 2017 in New Providence continued in the early hours of Wednesday with the fatal shooting of a young man on Williams Lane off Kemp Road, the second killing in Nassau in nine hours.

Police reported that officers were called to the scene around 4am and found a man dead. It takes the country's murder total for the new year to 11, according to The Tribune's records.

The Kemp Road shooting followed an incident on Tuesday night in which a man was shot to death and three others were wounded after two gunmen opened fire on a group of men standing on Second Street in The Grove. Police have not identified the victim.

According to Chief Superintendent Clayton Fernander, who is in charge of the Central Detective Unit, the shooting took place around 7.30pm, when a dark vehicle arrived where the men were standing.

“Two men exited that vehicle and fired a number of shots. As a result, four adult males were shot. One died on scene (and) the three other victims were taken to hospital by private vehicle. They are presently being attended to by doctors at this time,” Chief Supt Fernander said.

“We can’t say the nature at this time, but we have officers who are at the hospital following that line of inquiry. We are unclear at this time of the motive of this shooting. As you can see you have uniformed officers and detectives on the ground; some are doing some door-to-door inquiries to see whatever information we can retrieve.

“We are also appealing to residents in this area if they have any information to please come forward and assist with advancing this investigation.”

He said police have not ruled out the possibility of this murder being connected to any of the previous nine recorded so far for the year.

Tuesday’s shooting follows a weekend of bloodshed in the capital, in which wo men died and another was left recovering in hospital after three separate shootings.

On Sunday, around 2am, police said they received reports that the body of man was lying in the road on Finlayson Street, off Poinciana Drive. When officers arrived on the scene, they found a lifeless man on the ground with multiple gunshot injuries to the body. He was pronounced dead on the scene. Police have not identified the victim but The Tribune understands he is 29-year-old Raynor Davis, of Flemming Street.

Hours earlier, police were on the scene of another killing, this time in the Kemp Road area. According to Assistant Commissioner of Police Stephen Dean, around 9am on Saturday the victim was walking near Strachan’s Corner when the occupants of a Honda Fit vehicle pulled up and fired several shots at him, killing him. He was pronounced dead on the scene.

In barely two weeks the murder count for January 2017 is one short of being equal to the entire month of January 2016. Seems like whenever information is released about crime figures being down the murder rate goes ballistic.

When the thugs read the report of 26% decrease in crime, they decided to work harder in 2017.

IT always happens when the Commissioner brags about crime reduction.

Isn't the number 12? Almost one a day. There is a shootout going on in Kemp Road right now... a couple more... by tonight.

Actually it is Henry Reed and not Rudyard Kipling who wrote it. Kipling wrote "eleougy written in a country church yard." Read that too.