Exploring the blue holes of Abaco 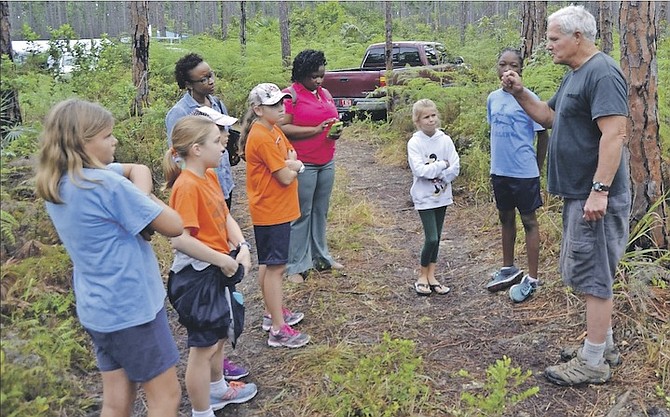 RESEARCHERS from National Geographic, Bahamian scientists and local students have been mapping and exploring Abaco’s mysterious and beautiful blue holes.

During a 16-day visit last month, some of the world’s top explorers and scientists in their fields conducted educational outreach for 167 students from six Abaco schools, who enjoyed hands-on experience .

The scientists and researchers were in Abaco as part of a research grant towards “Exploration, Mapping and Outreach in The Bahamas Blue Holes National Park”, which is funded in part by National Geographic. Local partners include the National Museum of The Bahamas/Antiquities, Monuments and Museum Corporation (AMMC), Friends of the Environment and many local businesses and individuals.

As part of the educational outreach, six local schools visited the research site at Dan’s Cave blue hole. Students heard from the scientists regarding their research, had hands on experience with animals retrieved from the depths of the blue hole, listened to acoustic markers (pings) placed many metres beneath their feet, and viewed the world through augmented reality goggles which overlaid a map of the cave systems.

Students also received an educational and tasty demonstration of Bahamian bush medicine by local guides Marcus Davis and Terrance Rodgers. They experienced ‘virtual reality’ cave diving: blindfolded they crawled through a wooden box (simulating the claustrophobic nature of exploring caves) while following a string. An informative talk on the pine forest was also presented by biologist Tom Morris.

Kristin Williams, Executive Director of Friends of the Environment, said: “In six days, 167 students had the opportunity of a lifetime to work with some of the top cave divers, scientists and explorers in the world and we are so grateful that Friends was able to help facilitate these experiences. Abaco is a special place that continues to attract world class science and exploration.”

Ms Albury, manager and curator of Paleontology for the National Museum of The Bahamas, said: “The goal of this project was to gather more information about the caves through survey and mapping and then have the children participate in some amazing hands-on activities designed and taught by the team members. Like reading chapters in a book, blue holes and caves reflect the rich natural history of the formation of our islands, sea level and climate changes, and contain the remains of plants and animals that died and sank into the dark anoxic bottom sediments. All of these things tell us about our islands ecology through time and how animal and plant communities functioned before, during and after waves of humans migrated into The Bahamas.”

Blue holes act as natural time capsules and contain some of the most intriguing collections of natural, geologic, and human history in the West Indies.

“For over a decade, the National Museum of The Bahamas has supported the research of blue holes, caves, and the natural history of The Bahamas,” Ms Albury said. “Our natural history is intimately tied to the blue holes and caves because they contain evidence of our islands’ natural, geologic and human history and as well as each islands precious freshwater resources.”

The researchers and explorers spent their time, when not interacting with curious students, engaged in a variety of scientific pursuits.

In the afternoon the divers explored constricting, flooded tunnels hundreds of feet below the ground. They set pinging devices, monitored by Adrianna McPhee and Kelly Delancy, whose frequency could be picked up back on the surface. This allows for more accurate mapping of the twisting caverns.

That mapping data could then be transformed into a 3D image thanks to the work of researchers such as Dr Jaskolski, who coded and designed an augmented reality interface which may one day be implemented in walking tours of the Blue Holes National Park.

Fossils and animals were catalogued by the dive team. The animals are blind, translucent and unlike any other on earth. The fossils tell a fascinating story of a very different Bahamas, detailing the creatures and people that inhabited the islands.

Dr Broad summed up some of the goals of the project as “the culmination of the lessons learned by many of us on the team. We’re mapping this cave system that could prove to be the most extensive island cave system in the world. In doing so, we’re testing new underwater technologies and hoping to create the first virtual-reality/3-D room of an underwater cave system to be used for education, and developing an interpretive trail above the cave system.”