Trump Takes Charge: Sworn In As 45th Us President 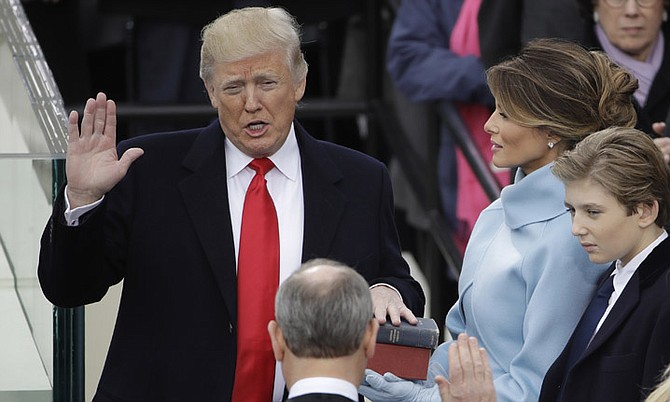 WASHINGTON (AP) — Pledging to empower America's "forgotten men and women," Donald Trump was sworn in as the 45th president of the United States Friday, taking command of a deeply divided nation and ushering in an unpredictable era in Washington. His victory gives Republicans control of the White House for the first time in eight years.

Looking out over the crowd sprawled across the National Mall, Trump painted a bleak picture of the nation he now leads, lamenting "American carnage," shuttered factories and depleted U.S. leadership. President Barack Obama, the man he replaced, sat behind him stoically.

Trump's first words as commander in chief were an unapologetic reprisal of the economic populism and nationalism that fueled his improbable campaign. He vowed to stir "new national pride," bring jobs back to the United States, and "eradicate completely" Islamic terrorism.

In a remarkable scene, Trump ripped into Washington's longtime leaders as he stood among them at the U.S. Capitol. For too long, he said, "a small group in our nation's Capital has reaped the rewards of government while the people have borne the cost."

For Republicans eager to be back in the White House, there was little mention of the party's bedrock principles: small government, social conservativism and robust American leadership around the world. Trump, who is taking office as one of the most unpopular incoming presidents in modern history, made only oblique references to those who may be infuriated and fearful of his presidency.

"To all Americans in every city near and far, small and large from mountain to mountain, from ocean to ocean, hear these words: You will never be ignored again," he said.

Trump was sworn in by Chief Justice John Roberts, reciting the 35-word oath with his hand placed upon two Bibles, one used by his family and another during President Abraham Lincoln's inauguration.

Trump and wife, Melania, bid Obama and outgoing first lady Michelle Obama farewell as they departed the Capitol grounds in a government helicopter. Trump and Obama's political paths have been linked in remarkable ways. Before running for the White House, the billionaire businessman led efforts to promote falsehoods about the 44th president's citizenship and claim on the office.

Obama addressed a staff gathering at Joint Base Andrews before departing for a vacation in California. "You proved the power of hope," he said.

President Donald Trump Commits To Champion For Americans 1st! *We Need A Trump!*

Every American should be proud to finally have a President committed to the best interest of the people and country first.

PM Christie and the PLP promise of "Bahamians First" & "We believe in Bahamians" won them the 2012 election. They totally reneged on their promise and subsequently lost public trust and appeal.

Hopefully President Trump will keep his word to the American people, or he too will end up as a one term total failure. Rejected, despised and untrusted, just like PM Perry Gladstone Christie.

Make not mistake - Trump will demand accountability and he will call out politicians who are all talk and no action. He will secure the borders, strengthen the US military and eradicate Islamic extremists, to name just a few. He's actually going to run the country like a business, hire the best and brightest cabinet leades and demand results. A novel concept that Bahamians seriously need to think about as the next election approaches. The unfortunate reality however, is that the PLP party is inept and their is no viable opposition. Sad, very sad.

Most people here are delighted with the election results. Even those who may not have supported candidate Trump realize that with his victory and the defeat of Mme. Hillary, they dodged not merely a bullet, but a fully armed, MIRV'd, incoming nuclear missile.

The excitement and optimism is reminiscent of thirty six years ago, when President Reagan's election finally put a stop to the dreary Carter years.

Markets began rising the day after election day with Trump as with Reagan. Companies are announcing that they're staying rather than fleeing to Mexico, while others offshore are announcing plans to build new plants in America. Hiring is up, and one can feel the difference already.

Thank you, friends, for your kind above comments which well describe the upbeat sentiment here.

The winds of change are blowing around the world. The seventy year old Post-WW II 'arrangement' concocted by the rockefellers and their fellow Elites is collapsing.

The American press is insulting President Trump every which way it can, but to no avail.

Citizens no longer believe the media which lied when it falsely claimed that Trump had removed the bust of Martin Luther King from the Oval Office, when in fact it was right where it's always been. The press was caught in yet another of its endless lies when it showed sparse crowds at the Inaugural, without qualifying that the photos were taken several hours prior to the commencement of the proceedings, when many were still going thru checkpoints.

Trump beat the lying marxstream media at their own game by twittering out the facts to counter the pressniks' lies, and the press is now collapsing.

It's why most people these days hit the blog comments sections first, to get the real story.

It's been many years since the adults were in charge in America, and many are welcoming the change.

In recent decades, people here have oft expressed that they fear their government, one hostile to the citizens it's sworn to serve. President Trump addressed this in his inaugural speech, saying there's a new rule in effect: government is the people, and government will serve the people rather than make life difficult for them.

Arms, Military expansionism, siding with Saudi Arabia/Israel, cozy relationships with big oil, big Pharma and special interests in congress will all remain the same. Don't try and sell bullshit. It's still as usual on those fronts.

That being said we'll have to wait and see what Trump and this Republican lead America does, as it still may spell bad news for the Bahamian financial sector which is still coming under fire and under significant threat. Also, we must see if Trump will live up to his word and renege on the Cuba deal, which would benefit our struggling economy and stagnant tourism product.

Don't take my word for it, the rockefelons and their fellow Elites established the post WW II arrangement which featured a steadily growing state to provide 'services to the people' in exchange for their liberty and wealth.

It was well discussed during the campaign, oft noted by the Elites, the RINO republicans and others that Trump was a clear and present threat to the 'Post World War II Order'.

Your concerns re 'arms, military expansionism, siding with Saudi Arabia/Israel...big oil..big pharma' may still be hot items in congress, but Trump is no friend to either party in congress.

Trump has repeatedly stated he does not intent to wage endless idiot wars abroad, as have both the demsheviks and the republicommie Neo-Cons.

HE has also questioned the amounts spent on various military aircraft, in particular the F-35, a flying Kelvinator which harkens back to the stupidest contraptions of the McNamara Defense Era of 'whizz kids'.

Big Oil and Big Pharma are confabulations, boogiemen created by the Left because the Left always needs 'enemies' to rail against.

Agree, you'll just have to wait and see as no one has a crystal ball.

The so-called Cuba trade deal is meaningless, don't let it worry you.

Though the American marxstream media ballyhooed about the billions in trade with Cuba, it's more like a couple hundred million, and Cuba as usual can't cough up the money.

It was all smoke and mirrors, left wing gas passed to make the demsheviks look good.

Given the shifting trends, the Bahamas may well be on its way up by summer.

Please check out the astute comments by 'SP', below.

SP said it far better than can I, and SP is right on the money.

Things are looking up.

The idiot 'Cuba trade deal' was done for two reasons, neither one good:

SP nails it, and speaks for many Americans. Rising tides lift all boats.

Regardless of trying to "reverse spin" everything Trump says and does, U.S. media now find themselves on the losing side of the coin, as he exposes their lies, and more people lose trust in them finally realizing mainstream media did all possible to unfairly sway the electorate against him, siding with corrupt corporate America, shady Republican and Democrat politicians, all in crooked Clinton's corporate pal's pockets!

President Trump's plan is 180 degrees against everything big corporations invested in for decades with their lobbyist, to buy corrupt politicians, allowing them to do what's best for their profit margins instead of whats best for country and the American people.

Donald Trump is effectively 100% upsetting the applecart that Obama identified and campaigned on in 2008, however, lost his way, selling out to corruption with the Clintons and big global corporations.

Hopefully this will lead to a trend causing thinking Bahamians to demand a similar course change away from PLP and FNM corruption, and the so called "new world order" they also secretly subscribed to, which began its collapse in ernest with UK Brexit and now set to sweep the EU to oblivion with France, Greece, and Germany following suit.

Stay the course for the American People & The United Staes Of America!