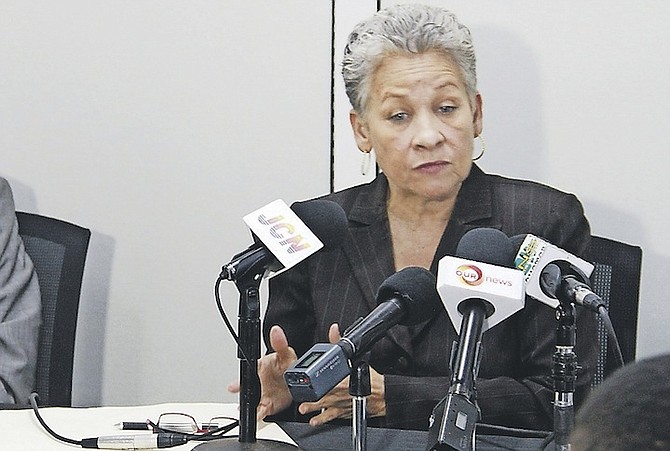 TRANSPORT and Aviation Minister Glenys Hanna Martin yesterday refuted assertions in a Tribune article that accused the Progressive Liberal Party of being responsible for the country’s loss of millions of dollars in overflight fees, charging that this newspaper is engaging in “fake news” and a “perverse misrepresentation of the facts”.

Mrs Hanna Martin, during a press conference, said the headline of the article, “Hundreds of Millions in Flyover Fees lost by PLP” is “false”, as she said the PLP is the only government that has “assiduously pursued the realisation of the sovereign air space of the Commonwealth of The Bahamas”, as well as the “payment of overflight fees for the Bahamian people”.

She also said the government’s recent announcement of the exemption of over flight fees for Bahamian aircraft which take off and land in the Bahamas is “the result of diligent, dogged and sustained efforts by the Bahamian government, led by a multi-agency Bahamian negotiating team.”

Rather than the PLP, Mrs Hanna Martin suggested that the previous FNM administration was to blame for the amount of time it has taken to achieve this, as she said during that administration’s 2007-2012 term, “little effort, if any was made to pursue the 2006 Federal Aviation Administration (FAA) proposal,” which she said was on the table prior to the 2007 election.

The piece in question claimed that the PLP was to blame for the loss of “hundreds of millions” of dollars in over flight fees, due to the PLP’s alleged negligence in responding to the FAA’s proposal to settle the matter some 11 years ago.

According to documents referenced in the piece, the International Civil Aviation Organisation (ICAO) had reportedly said that the FAA was only able to have the first official dialogue at the Ministry of Foreign Affairs in March 2014, after having submitted its “Air Navigation Service Provider Proposal back in 2006.”

However, Mrs Hanna Martin said in 2006 during the first Christie administration, negotiations initiated by that government had “progressed as far as a request from the Bahamian government for the US government to submit a proposal for the payment to the government of the Bahamas of over flight fees.”

“The claim that the Bahamas, or in the words of The Tribune article ‘the PLP’ only initiated discussions on a Bahamian FIR in 2014 is therefore false,” she said. “Months following receipt of the FAA’s 2006 proposal, the Christie administration lost at the polls and the Ingraham administration was at the helm.

“It was during this 2007-2012 period there was a drastic shift in policy, to the extent that no less an individual than the then Prime Minister (Hubert Ingraham) asserted to the Bahamian people that the Bahamas would never control its own airspace. During that period, little effort, if any, was made to pursue the 2006 FAA proposal, which was on the table prior to the 2007 election.”

She added: “In 2012, the Christie administration recommenced with vigour the discussions which originally led to the 2006 proposal from the FAA, however it was clear that the figure was no longer relevant, and we were compelled to begin from scratch.

“The recent announcement of the exemption of over flight fees of Bahamian aircraft which take off and land in the Bahamas is the result of diligent, dogged and sustained efforts by the Bahamian government, led by a multi-agency Bahamian negotiating team.”

Earlier this month, the Christie administration hailed as a “landmark accomplishment” its agreement with the FAA to exempt Bahamian aircraft operators from the payment of over flight fees for domestic flights.

At the time, Prime Minister Perry Christie said the deal, which could be the first step in the Bahamas regaining control of its own air space above 6,000 feet, would save the national flag carrier, Bahamasair, around $1m over a three-year period.

Under international laws, countries require airlines and other aircraft to pay a fee for the right to fly over their airspace. The administration of those rights in the Bahamas has been performed by the FAA since 1952, meaning Bahamasair and other Bahamian-owned carriers have had to pay the US for the privilege of flying over their own country.

Sigh...., some "alternative facts" from the PLP. It's kinda sad watching Hanna Barbera attempt to fit her entire current-events vocabulary into a sentence.

This wretched incompetent idiot has been an albatross around the necks of the Bahamian people for decades only because of nepotism. A.D. Hanna cursed us with this imbecile - his loud mouthed loonie tune daughter who has absolutely nothing of any substance between her two ears!

Why are we saddled with this minister now? A deer in the head-light moment!

this nasty useless cr@bby always on the back foot to try and shout and scream in reaction because she yet again been proven to be the most wutless minister.

WHAT HAPPEN STILL TO THE MISSINGS 600,000 THAT WAS STOLEN RIGHT UNDER YA STALE ASS !!?? No more Comments from that I see !

My boys them tryna jack Obama care now they putting this "fake news" headline up. Lets try to be a bit more original next time sweet girl.