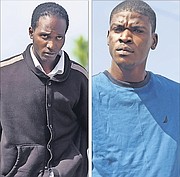 Devon Strachan, 26, left, and Christopher Joseph, 25, who are both accused of murder.

TWO men were remanded to prison yesterday after being arraigned in connection with two separate murders.

Devon Strachan, 26, of Peter Street was brought before Chief Magistrate Joyann Ferguson-Pratt accused of intentionally causing the death of Benjamin Rolle on January 1, and was charged with murder under Section 291 (1)(B) of the Penal Code.

A charge under this section does not attract the discretionary death penalty if a conviction is reached at the end of trial.

Chief Magistrate Ferguson-Pratt informed the accused that he would not be allowed to enter a plea because his case would be fast-tracked to the Supreme Court.

This would occur through service of a voluntary bill of indictment, scheduled for March 7 at noon.

However, due to the nature of the charge, he was denied bail and remanded to the Department of Correctional Services.

He was advised of his right to apply for bail in the Supreme Court.

He was not represented at yesterday’s arraignment.

In a second murder arraignment before Chief Magistrate Ferguson-Pratt, 25-year-old Christopher Joseph of Kemp Road was accused of intentionally causing the death of Lanero Alleyne on December 7, 2013.

He too was charged with murder under Section 291 (1)(B) of the Penal Code.

Joseph was also told that his case would be fast-tracked to the Supreme Court for trial on March 7 and was remanded into custody without bail because of the nature of the charge.

He has retained attorney Ian Cargill to defend him.