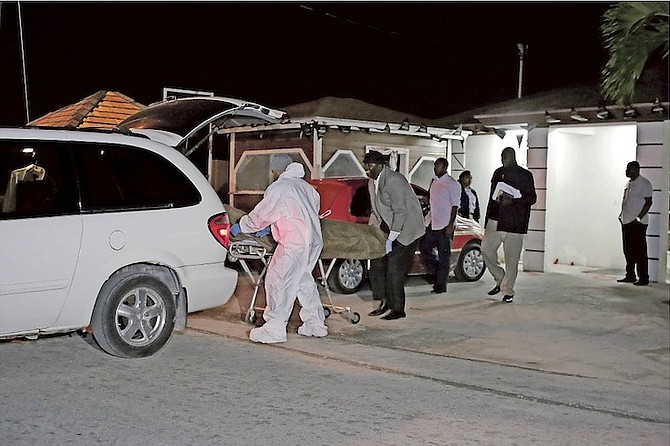 The scene of a murder in Kennedy Subdivision as a man was shot and killed in the front of a home. Photos: Terrel W. Carey/Tribune Staff

The killings marked 13 homicides in 23 days, according to The Tribune’s records, surpassing the eight people killed in the entire month of January 2016.

The latest homicide occurred after 9pm Monday when a man was shot outside a residence in the Kennedy Subdivision. According to Assistant Commissioner of Police Stephen Dean, two men approached from a dark coloured vehicle and shot the victim.

The gunmen left the scene in the vehicle. The victim was pronounced dead on the scene.

While acknowledging crime problems, ACP Dean said police have been doing good work as he lamented the number of “prolific offenders” who are on bail and committing crimes.

“Despite all the positive things we are doing, I can tell you since the year has begun police recovered a number of firearms off the streets, we are arresting a number of persons, we are still being blighted by these incidents of shootings resulting in death of young men,’ ACP Dean said.

“But I can tell you based on our analysis thus far that we have zeroed this in to just a small grouping of persons. We are targeting a number of prolific offenders.”

He asked the public to turn in wanted suspects for questioning before someone else is murdered.

“We are asking please to turn these people in before we have another life lost. We are very confident that if we bring some of these prolific offenders. . . people who are in and out of the system, a number of these persons are on bail for serious crimes including murder, armed robbery and rape. They have no intentions of changing. They are hell bent on committing criminal offenses.”

He said police are resolute and in spite of prolific offenders coming in and out of prison, officers will continue to fight crime.

“We want to reassure members that we are committed to our mandate of prevention and detection of crime,” ACP Dean said, adding that police will increase patrols and double their resources.

A day earlier, a 29-year-old father-of-two was killed after he was shot multiple times while standing in yard on Sunday evening.

The killing took place shortly after 7pm off Kemp Road and marked the fourth murder in the area for the year. Police as well as representatives from Urban Renewal and local pastors in Kemp Road scheduled a walk about in the area for Monday morning, however the event was postponed because of inclement weather.

According to police, officers received information that shots were fired near Whites Addition. When officers responded to the scene they discovered the body of a man with multiple gunshots wounds on the ground. The victim was rushed to hospital where he later died of his injuries.

Police said the victim was standing at the back of his home when a man armed with a handgun approached him and shot him before fleeing on foot.

Police have not identified the victim but The Tribune understands he is Anthony Mather.

Mather was one of two men shot on Sunday.

In the second incident shortly after 10pm, police said a man was walking near a nightclub in the area of Fox Hill when he was shot by an unknown assailant.

The victim was taken to hospital where he is listed in stable condition.