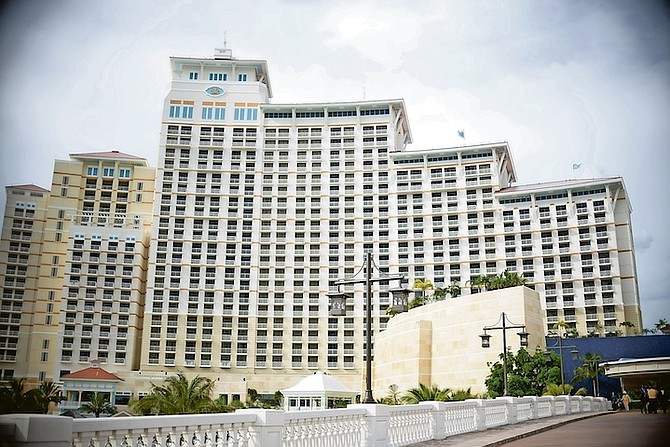 BAHA Mar’s main contractor was yesteday accused of “insulting the intelligence of the Bahamian people” over its missed completion deadline warning, with local industry players urging the Government to investigate.

Stephen Wrinkle, a former Bahamian Contractors Association (BCA) president, questioned how a dispute over the delivery of 1,420 lounge chairs could delay “substantial completion” of a $4.2bn project.

“It’s a heck of a stretch for a $4.2bn project to be held up by a couple of lounge chairs,” he told Tribune Business. “There’s something wrong with that. It doesn’t compute.”

Mr Wrinkle was backed by Leonard Sands, the BCA’s current president, who said he could not see how the non-delivery could result in CCA missing the deadline.

Meanwhile, Tourism Minister Dionisio D’Aguilar dismissed claims of another missed completion deadline, saying this would be “odd” for a resort of its size.

Mr D’Aguilar, in an interview with reporters before a Cabinet meeting, suggested that he has no concerns over a recent Tribune Business report that the project’s deadline could be missed over a legal dispute with a key supplier over the project’s 1,000 plus lounge chairs.

Nonetheless, Mr D’Aguilar said the Minnis administration is “very anxious” for the project to be finished.

When asked for comment on the matter yesterday, Mr D’Aguilar said: “I think they’ll address that issue. I don’t think that if you’re investing significant amounts of money in getting that project ready, really the deck chairs are the issue that will cause a delay in opening and Bahamians getting employed.

“I didn’t believe that as something significant, but I haven’t spoken to them as yet to get the other side of the story to find out why it’s so pressing. But my initial reaction is I don’t think deck chairs are going to really delay the opening of a hotel of that size, with that magnitude of an investment.

“The Bahamas government is very, very anxious for that project to be finished,” he added. “We have heard about endless delays, obviously in the past, and we’re just very, very anxious for it to be opened and for Bahamians to be employed. I found it a little odd that the reason for the delay as reported in the press yesterday (Monday) is deck chairs. I don’t think that’s going to delay the opening.

“…We just have to get it opened as soon as possible, and Bahamians employed. There’s a pressing need to find jobs, there’s high unemployment, and obviously we want to get that project opened as quickly as possible.”

When asked if he has any meetings planned with CCA or Baha Mar officials, Mr D’Aguilar said: “No, nothing is planned. I’m sure in the cursory course of my day I’ll put in a phone call, and find out if there’s any concerns, are we still on schedule for the dates. October was for the SLS, I believe March or April of next year is for the Rosewood, and if there’s any change I’m sure they will appraise me of that and I will report back to you at that time.”

On Monday, Tribune Business reported how Baha Mar’s main contractor has raised the alarm that it may miss the project’s completion deadline if a Florida-based supplier continues to withhold 50 per cent of the project’s lounge chairs.

China Construction America’s (CCA) Bahamian subsidiary, in legal findings obtained by Tribune Business warns that itself – and Baha Mar – will “suffer incalculable and irreparable damage” if Source Outdoor is not compelled to deliver the 1,420 chairs it is holding.

CCA, in a lawsuit filed with a South Florida court last Thursday, alleges that these chairs are “essential to the timely completion” of the Cable Beach development by October 15.

Failure to hit the completion date, CCA alleges, will expose it to penalty fees of $150,000 per day –rising to $250,000 per day after one month – under the terms of its construction contract with the China Export-Import Bank.

Baha Mar was initially set to open in December 2014. A soft-opening was held in April of this year.

Guess it's taking longer to clear cement from water pipes than CCA thought.

Looks like Sarkis is being vindicated CCA is as bad as he said...

We really need to throw CCA out of our country. They are obviously as corrupt and incompetent as their pets in the PLP...

I hope they miss maybe we bahamians can get back some of the money the PLP stole and gave to CCA!

Comrades! Why act all surprised how a dispute over the delivery of 1,420 lounge chairs could delay “substantial completion” of a $4.2bn project? Did everyone forget it's Baha Mar we're talking about and everything and everyone ever connected to Baha Mar - does knows how duck and hide - including the Chinese who packed up once before and left without completing the $4.2 bn Cable Beach resort project. In fact some now are the nation's newest set decision makers who swore they would sell Baha Mar right out from under the Chinese??????

A $4 billion dollar hotel project in the Bahamas doesn't make sense! I wish, I wish, I wish this hotel opens soon and becomes relevant to our economy. But, for the life of me, I can't see how this project can be sustained over a year or two.