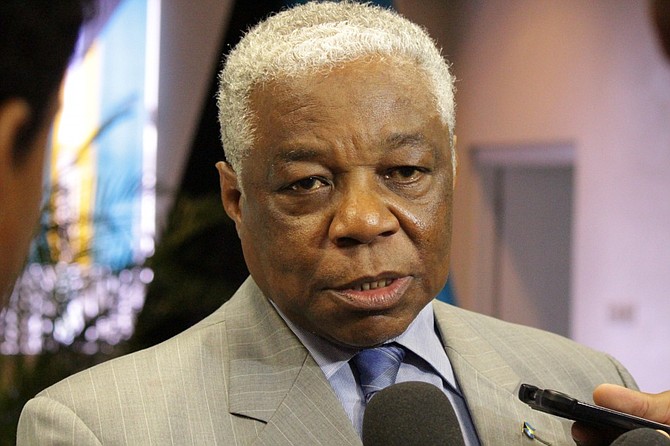 The funeral for Dr Bernard Nottage will take place on Friday.

THE Minnis administration has increased the government’s budget for the official funeral for Dr Bernard Nottage from $10,000 to $50,000, the Cabinet Office announced yesterday, while explaining why the former member of Parliament will not be given a state funeral.

The official funeral will be held at St Agnes Anglican Church at 11am on Friday.

In a statement released Monday evening, seemingly in response to criticism that Dr Nottage was not afforded a state funeral, the Cabinet Office explained that state funerals are reserved for governors general and prime ministers, serving or retired, and Cabinet ministers who die while in office.

For official funerals, the Cabinet Office noted, the government normally assumes costs up to a maximum of $10,000. In honour of Dr Nottage’s service to the country over the years, the Minnis administration has increased this budget.

The statement also said the government paid all the expenses related to Dr Nottage’s medical care in Florida and the repatriation of his remains to the Bahamas.

Monday’s statement also noted that Prime Minister Dr Hubert Minnis was in “close and frequent contact” with Dr Nottage’s wife, Portia Nottage, while the former MP was in hospital.

“The second tier of government funerals is the official funeral which is given to former Cabinet ministers and serving members of Parliament,” the statement noted. “The government covers funeral costs up to a maximum of $10,000 and the police and defence force provide an honour guard. Lying-in-state takes place in the House of Assembly. The church service is carried live on radio and may be recorded for future airing.

“The church service is attended by the governor general, the prime minister, Cabinet ministers and other parliamentarians and senior public officers. In recognition of Dr Nottage’s many years of public service in the area of politics and sports, the government decided to increase the funeral costs it would bear to a maximum of $50,000.00.”

The lowest tier of government funerals is the state recognised service given to former members of Parliament, serving permanent secretaries and other high ranking public officers or civilians who have made invaluable contributions to the state, the statement added.

There will be a viewing of Dr Nottage’s body at the Progressive Liberal Party’s headquarters today, the Thomas A Robinson National Stadium on Wednesday and at the House of Assembly on Thursday.

He had been airlifted to the US after spending three days in the Intensive Care Unit at Doctors Hospital.

Dr Nottage’s body returned to the country on Friday in a large box. Grieving family members waited at Odyssey Aviation airport to greet him.

Yesterday, the Cabinet Office said the Cabinet secretary has issued a formal communication to Dr Nottage’s wife informing her of the government’s decision to have an official funeral and outlining all of the matters for which the government would be responsible.

“The National Events Unit of the Cabinet Office is working with Dr Nottage’s widow and other family members on the details of Dr Nottage’s official funeral. In the morning of Thursday, July 6, that unit met with Dr Nottage’s widow, brother, sister, sister-in-law and Nottage’s rector to discuss pertinent logistical and protocol matters to be attended to prior, during and after the funeral service. Mrs Nottage chose St Agnes Anglican Church where they worshipped as the location for the funeral. St Agnes is also located in the constituency Dr Nottage represented for many years.

“. . . The Cabinet Office will continue to provide support and advice to the Nottage family during their period of bereavement.”

Dr Nottage is survived by his wife and their two sons.

The veteran politician was born in Nassau on October 23, 1945 to the late Bernard Nottage Sr and Olevia Nottage.

He received his training as a gynaecologist at the University of Aberdeen, Scotland, and The Royal College of Obstetricians and Gynaecologists.

An outstanding athlete in track and field, Dr Nottage was also a long-time president of the Bahamas Amateur Athletics Association (BAAA).

Over the course of his political career, Dr Nottage served as a Cabinet minister in one Pindling administration and two Christie administrations.

Dr Nottage was first appointed chairman of the National Insurance Board in 1982.

In 1989, Dr Nottage was appointed minister of consumer affairs and then minister of education in 1990.

However, Dr Nottage later left the PLP to assist in the formation of the Coalition for Democratic Reform (CDR) and was elected leader of the third party in early 2000.

Dr Nottage unsuccessfully led the party into the 2002 general election.

In 2005, he returned to the then governing PLP and was afterwards appointed to the Senate.

Dr Nottage was defeated in the 2017 general election by 22-year-old Travis Robinson in the Bain and Grants Town constituency.

He was a member of the Anglican church community.

Wow. We sure could use that 50 grand in Freeport. That can pay for electricity for 1000 families for a month. Instead of wasting on a funeral for an empty suit send it to Freeport.

Let the PLP pay for the funeral. Ashe alone can afford it...

Just grind your teeth on this, bulla

PLP's don't pay for nothing. Especially when the government will pay for it.

And why on earth would the government pay for his medical care in Florida when we supposedly have state of the art facilities and the best doctors here in The Bahamas?

Not to mention, he wasn't broke (presumably). While the intentions are pure for a great politician, it's a dangerous precedent to set.

True ........ when ordinary folk get sick, they borrow money, sell assets and hold cookouts .......... when politicians get sick (and die), the Treasury pays their bills, bury them, and take care their families in perpetuity........... They have made the laws to suit their personal fortunes

Comrades! I have stayed away from commenting on the political contributions to the nation by the late Dr. Nottage cause there is a later and proper time and place down the road to join in the conservations.
Today's $50,000 announcement by Minnis is proof that it is a whole new lie by the newly elected red regime of - "It's the People's time".
Let's put it politely as I can this way. Having declared assets in excess of $8.4 million is not akin to just owing a sapodilla tree worth $300, a hog plum tree worth $300 and six banana trees worth $120. Now is it?
Give this one a thought, okay? Is the members the red regime's cabinet - trying to keep with the Kardashians spending ways - but using state monies?

Re-post: Minnis must think he deserves the financially bereft country he lives in today, but many of us do not share his view! To be all-forgiving and sympathetic to past senior officials at the highest level of what was a despicably corrupt government, one that has caused so much misery for so many Bahamians, especially the more vulnerable very young and very old, simply smells of the kind of Christianity that so many self-processed Christians in our country today hide behind whenever it is convenient for them to do so. BJ never once spoke out about all of the crimes and wrongdoing that went on right under his nose, nor did he choose to divorce himself from the corruption, preferring instead to play the role of a faithful soldier. You don't idolize such men on their passing nor do you throw out their bad and only look at their good, as if somehow the latter justifies forgiveness of the former. A civilized society has no room for "feel good" hypocrisy, even the mourning kind.

Re-post: His life's record is there and cannot now be changed no matter what all of the self-professed Christians may like to believe should be his legacy. The same holds true for Christie, Maynard-Gibson, Baltron Bethel and so many others like them. In the case of BJ, let's just say his maker is now left to pass final judgement, and leave it at that - nothing more need be said.

I would assume Mr. Nottage would have medical insurance . The Government must be paying the deductible. The Truth is Doctor Nottage does not really care what kind of service they give him. He is now in God's hands. Doctor Nottage has done well. and he accomplished much.

Disgusted. This country has no chance at all. All the talk of fiscal prudence, it is all horse sh.. when a newly elected government thinks it's OK to start pissing the peoples money away all over again. There are 300,000 people in this country and 275,000 of them have to beg, steel and borrow enough money just to bury their people and these political psychopaths continue to justify the wanton waste of tax payers money on the few of them.

Really..... what has Bernard Nottage or any of our contemporary political leaders done for our country? Nothing much. They don't give anything.... yet they demand so much. This man was a careless, glutton who benefited and prospered on the backs of Bahamian misery for decades. He lavished in the life of luxury under successive Pindling and Christie lead governments only to charge Bahamian clients an exuberant fee for any medical service provided.

I'm not sure where Dr Bernard Nottage has gone...... but I don't think he's looking down.

Isn't this the same Gov. That Lambasted all those former ministers....Now they changing what he's entitled to give him $40,000 more..... RIP Mr.Nottage atleast they are treating you well..."it's the PEOPLE'S TIME"

If the FNM continues on this path of bullshit I will soon be protesting in the streets again.

This Government is too damned generous with The People's money! How can we spend like sailors on leave if we have to borrow millions to pay our bills?

CAN YOU IMAGINE THE ATMOSPHERE AT BJs FUNERAL TOMORROW????????

BODY LANGUAGE EXPERTS WILL HAVE A FIELD DAY TOMORROW

WONDER WHICH ANGLICAN BISHOP WILL BRING THE SERMON?????????