Will Jonquel Start In All-Star Game? 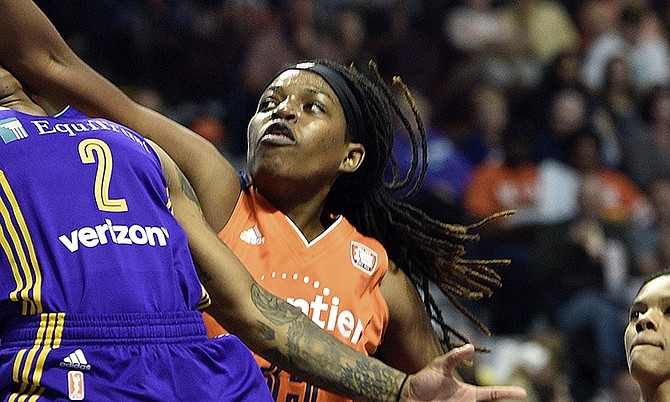 Jonquel Jones is having a breakout season in the WNBA. (AP)

JUST hours remain before we learn if Jonquel Jones is selected as a starter of the WNBA All-Star game and her Connecticut Sun continue to draw attention as one of the hottest teams in the league.

The Sun overcame a 22-point third quarter deficit and rallied for a 96-92 win over the Washington Mystics at the Mohegan Sun Arena in Uncasville, Connecticut, on Saturday.

Jones scored 22 points and grabbed nine rebounds - both team highs - as the Sun won their fourth consecutive game and moved into first place in the Eastern Conference.

With the win, the Sun improved to 10-7 and surpassed the Mystics who dropped to 10-8. Trio of teams atop the Western Conference standings - the Minnesota Lynx (13-2), Los Angeles Sparks (12-5) and Phoenix Mercury (10-6) boast the top three records in the league.

It was also the Sun's 10th win in the last 13 games as they stormed back after a 1-4 start and now are in position to make the playoffs for the first time since 2012.

Jones has posted averages of 15.9 points and a league leading 11.8 rebounds and 1.5 blocks per game.

All five of the Sun's starters finished in double digits, and reached another personal career milestone with her 500th career point.

The Sun look to continue their run when they travel to face the Seattle Storm , Wednesday July 12.

WNBA All-Star Voting 2017, presented by Verizon, opened in early June. The Verizon WNBA All-Star 2017 will be played on Saturday (July 22) at KeyArena, home of the Seattle Storm. The game will be broadcast on ABC at 3:30 pm.