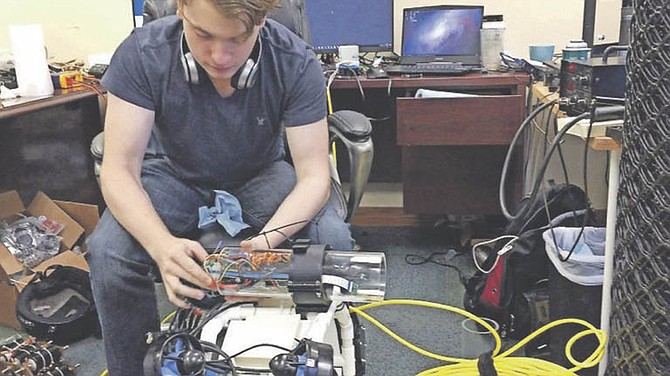 Ian Switzer, an engineer at American Marine Research Company, works on a drone in Pensacola, Fla. The company is designing robots to autonomously detect and collect lionfish. (Joseph Baucum/Pensacola News Journal via AP)

A potential game changer in the struggle to eradicate lionfish from the Gulf of Mexico is brewing in Pensacola.

Hailing from schools in the Northeast, a quartet of young engineers are underway developing drones to autonomously detect and collect lionfish at depths beyond the scope of human divers. The team, an inchoate startup called American Marine Research Company, arrived in the Florida Panhandle on June 9. It established operations at office space at 25 W. Cedar St. in downtown Pensacola.

By the end of July, the company’s goal is to be able to harvest enough of the sea creatures that the business turns a profit by supplying the fish to the restaurant industry.

“We’re building an artificial predator for a species that doesn’t have a natural one,” said Yuan Wang, 23-year-old co-founder of American Marine Research Company. “Our drones are very high precision. It’s not like a trap or a net. We’re confident enough in our remote operators as well as our artificial intelligence that we believe we can achieve a 95 percent hit rate.”

To explain the hit rate, Wang said the aim is to design a robot so adept at neutralising its target that out of 100 lionfish in a given area, it would pinpoint and corral 95 at the very least. At the same time, he added the company’s goal is to program the drone to also distinguish between other types of fish so as not to decimate other populations such as red snapper or grouper.

The company has labored on several prototypes. The priorities for the technology include ensuring the drones can move properly and descend to the appropriate depths, possibly deeper than 1,000 feet below sea level. The intent is to ultimately remove the need for a human user. The largest robot is about the size of a mini fridge and the tiniest, smaller than an office trash can.

Wang, who graduated from Princeton University in May, said the company most recently conducted a successful test on Sunday. One model was tested for agility and mobility. It demonstrated it could pull a 200-pound human across a pool about as quickly as a human can swim. But Wang noted the company has also had two failed tests where the robot was damaged.

“We’ve been making our systems incrementally more powerful and more robust and ready to receive attachments,” he said. “We don’t know if we’ll succeed, but it won’t be for a lack of trying.”

The lionfish have posed a threat for ecosystems in the Gulf of Mexico, because they largely lack predators in the region. The colourful fish, with feather-like fins and zebra-like stripes, originate from the Indo-Pacific region but have flourished off Florida since the 1980s when aquarium collectors released them into area waters. Each female lionfish spawns millions of eggs a year.

The National Oceanic and Atmospheric Administration’s website states that since “lionfish are not native to Atlantic waters, they have very few predators. They are carnivores that feed on small crustaceans and fish, including the young of important commercial fish species such as snapper and grouper.”

The administration has also “concluded that invasive lionfish populations will continue to grow and cannot be eliminated using conventional methods. Marine invaders are nearly impossible to eradicate once established.”

At the federal level, legislative efforts have been made to combat the lionfish. U.S. Rep. Matt Gaetz introduced a bill in May to expand upon a state program that has provided incentives for spear fishermen to collect the fish. The programme rewards people who amass large numbers of lionfish with tags that allow them to collect additional red grouper or cobia beyond the mandated catch limit.

The Fort Walton Beach Republican’s bill would implement a similar programme in federal waters. The bill has been assigned to the House Committee on Natural Resources, but has not moved any further.

Pensacola hosted its annual Pensacola Lionfish Removal and Awareness Day Festival in May, which included samplings of delicacies made from the fish, as well as a lionfish-catching tournament. Wang attended the event, tasting lionfish for the first time. He now counts it among his favourite fish to eat.