Don't Give Us A 'Toothless' Freedom Of Information Act 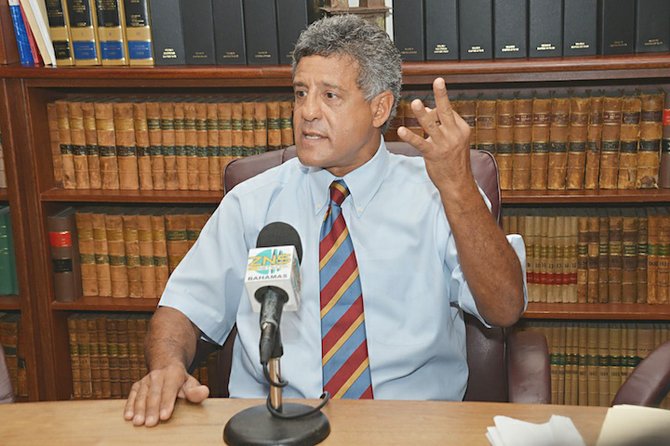 AN outspoken attorney has urged the government to enact nothing less than a "strong and powerful" Freedom of Information Act, as he called on the Minnis administration to do whatever is necessary to avoid presenting "toothless tiger" legislation to the Bahamian people.

Fred Smith, QC, told The Tribune that the Minnis administration now has the "historic mandate" to "do right by the people" and enact a robust FOIA, which he said would ensure the "citizenry of The Bahamas has access to all of the secret processes, and documentation and information in government".

Mr Smith also commended the Minnis administration for announcing plans to amend the present FOIA, which he said is "not satisfactory", and expressed his desire for the government to avoid showing the "same kind of hypocritical and disrespectful conduct" successive governments have historically displayed towards the legislation's enactment.

The former Christie administration passed a FOIA in Parliament in February. However, only part one and sections of part five and eight of the legislation have been enacted, allowing for the appointment of an information commissioner and repealing the 2012 FOIA.

Since then, various civil society organisations (CSOs) have pressed the government to pick up recommendations to amend the FOIA, calling on the Minnis administration to not only look to the timely enactment of the FOIA, but to also take the opportunity to make revisions to strengthen it.

Earlier this week, State Minister for Legal Affairs Elsworth Johnson confirmed the government is considering amendments to the FOIA.

"There was an outcry for the (FOIA) and I know discussions are ongoing to see how we can perhaps make amendments, or whatever have you," Mr Johnson said on a radio show on Sunday.

When contacted on the matter, Mr Smith expressed his support for the government's plans to consider amending various portions of the present FOIA.

"I am very pleased that the new administration is going to amend various portions of the Freedom of Information Act, which was not brought into effect by the PLP," Mr Smith told The Tribune. "Prior to passage of that act, civil society, there are about 20 of our organisations that had made quite a few very fundamental recommendations to the (former) government which they did not take into account.

"And so the current act is not satisfactory and so I am pleased, very pleased that the new government is going to look at amending it and we will certainly make recommendations, based upon what we said before, and trying to make sure that the act, when it is in final form is not a toothless tiger and really does provide transparency, accountability.

"Knowledge is power," he added. "And as the new government said 'it's the people's time,' and it's time that the people, citizenry of the Bahamas has access to all of the secret processes, and documentation and information in government."

However, Mr Smith told The Tribune that he remains historically "critical" of previous Free National Movement (FNM) administrations, due to a promise in 1992 by the then incoming FNM administration that there would be 'government in the sunshine' and greater transparency and accountability.

Mr Smith said "despite being in power numerous terms" after that however, those Hubert Ingraham-led administrations "failed to convert that pre-election promise into any kind of democratic reality".

"I am also very critical of the PLP who have been traditionally over the decades a very secretive government," he added. "But both the FNM and the PLP have been very hypocritical with the people of The Bahamas. Both administrations, at the 11th hour and 59th minute of each of their terms in office, passed different forms of a FOIA Act and never brought it into effect. I consider that a real slap in the face to the people of The Bahamas.

"It is disrespectful, it is hypocritical, and it sends a clear message that neither the FNM nor the PLP have really been committed to transparency in governance. Now Dr Hubert Minnis, the prime minister, and many of the new MPs in this recent campaign have committed themselves to a FOIA, and since they now have this historic mandate, and they came to power campaigning on transparency, anti-corruption, accountability, I am confident that the new government is not going to repeat that same kind of hypocritical and disrespectful conduct.

"I have every confidence and faith in the current administration that they will do right by the people and bring into effect a strong and powerful Freedom of Information Act very soon."

The previous Ingraham administration passed a FOIA shortly before the 2012 general election, however there was no date for enactment. The incoming Christie administration then overhauled the legislation, and conducted an extensive public consultation process.

However, the bill was only partially enacted ahead of the May 10 general election.

With a good freedom of information act we can get more corrupt politicians arrested as everyone who bid and lost on a project can see who won and how much the contract was worth. I'm sure that we will get a lot more people crying foul with evidence in hand.