Barbaric: Man Punched And Threatened On Video Over Alleged Theft 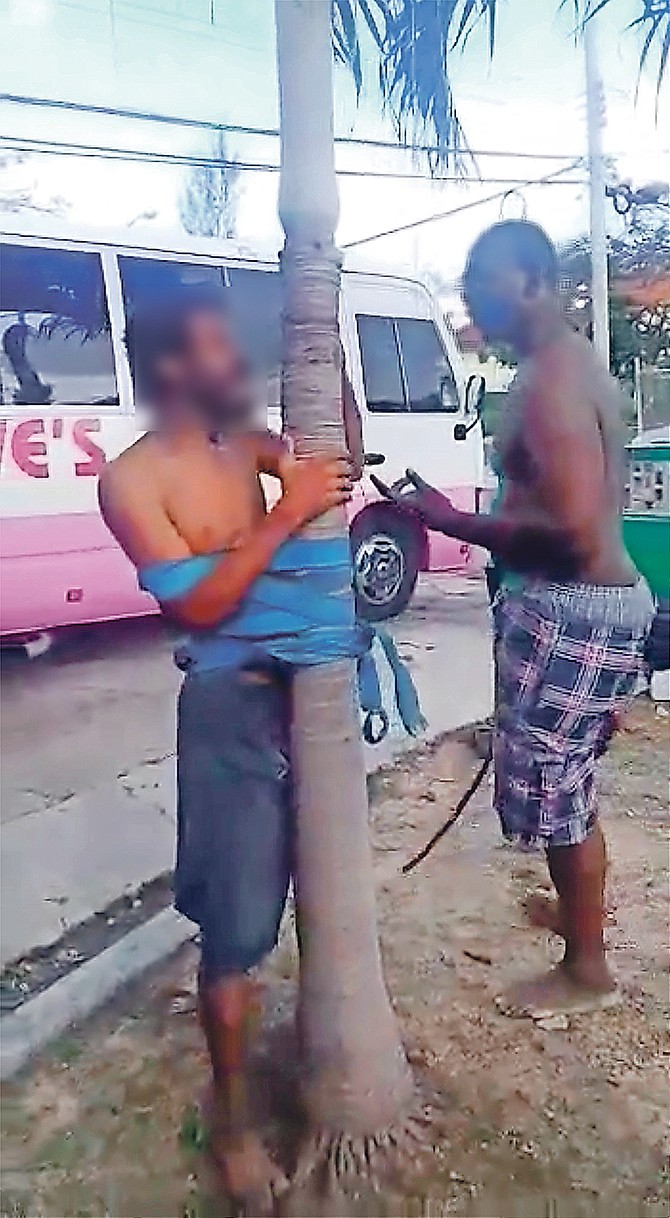 POLICE are investigating the circumstances surrounding a video circulating on social media depicting a man punching and threatening another man with a machete over an alleged theft. The victim was tied to a tree.

Chief Superintendent Solomon Cash, officer-in-charge of the Central Detective Unit (CDU), told The Tribune that CDU’s Cyber Crimes Division is “in receipt” of the video in question and is currently examining it with a view to “identifying the victim, the producer and all of the individuals engaged in the act.”

He was responding to a video making the rounds on various social media platforms in which a shirtless man is seen punching and threatening another shirtless man called “Yellow,” who is tied to a tree in a yard in an undisclosed location. Based on what was said in the one minute, 32-second long video, “Yellow” allegedly stole a canvas out of the yard in question.

A Stuart Cove’s Dive Bahamas bus can be seen parked in the background, from which the alleged attacker, who is said to be a former employee of the company, retrieves a machete that he uses to threaten the man tied to the tree. Attempts to contact Stuart Cove’s officials on the matter were unsuccessful yesterday.

However, The Tribune understands that the shirtless man has since been fired from the company.

While doing so, a woman recording the video could be heard telling the shirtless man: “He already get enough. But he got enough.”

Upon hearing no response from the man tied to the tree, the shirtless man goes to the driver’s side of the company bus and after a brief moment brings out a machete, which he then uses to strike the part of tree in front of the man’s chest.

As the man screams in terror, another unidentified man in a red shirt intervenes and manages to take the machete from the shirtless man, telling him repeatedly, “No, no, no, don’t do that, don’t do that.”

However, much to the protest of the woman recording the video, the man in the red shirt goes on to say: “‘Yellow’ man you need that though, you need (expletive) that.”

As the shirtless man continues to angrily ask “Yellow” if he “come in this yard to thief,” the man in the red shirt, now in the foreground trying to prevent the other man from going after “Yellow” any further, continues to scold the tied up man for allegedly stealing a canvas out of the yard in question.

When the woman asks for a final time for the man to be released, the man in the red shirt replies by saying: “No, he gone stay right here,” before the video cuts out.

When contacted by The Tribune on the matter, Chief Supt Cash said: “The police are in receipt of the video…The Cyber Crimes Section at the Central Detective Unit is currently looking at it with a view of identifying the victim, the producer and all of the individuals engaged in the act.”

It is not unusual to give a jonser a good old fashion cut hip when you catch him t'iefin. But if you tie him up beat him, threaten him with a machete, have all your actions recorded and posted on Facebook, then your actions are a bigger crime than what the jonser did. It may have been better to call the police for him.

Is this what Bahamians are coming to or has it always been there and just being exposed due to the obsession with 'social media'?