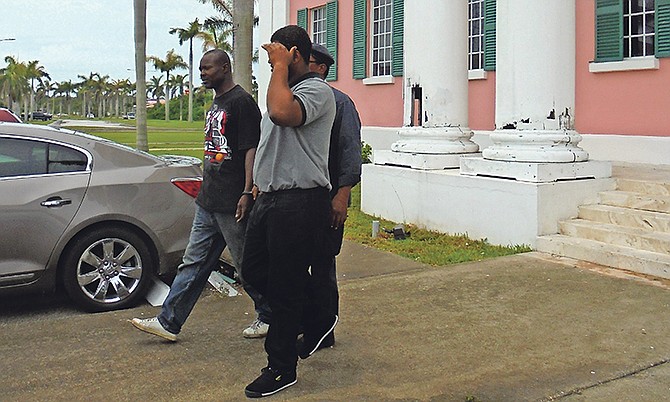 Karame Styles in grey and George Willie in black shirt at far side, at Freeport Magistrate’s Court. Photo: Derek Carroll

THREE persons, including a pregnant woman, were charged with unlicensed firearm and ammunition possession in the Freeport Magistrate’s Court on Thursday.

Karame Styles, 32, his wife, Tanika Styles, 33, both of Freeport, and George Willie, 46, of Pinder’s Point, were arraigned in court two before Magistrate Charlton Smith.

Ernie Wallace represented the couple. George did not have a lawyer present.

Tanika Styles was charged with one count of possession of an unlicensed firearm and ammunition. It is alleged that on January 19 at a residence in Freeport, police found an assault rifle, namely an AK-47, and ammunition.

Mrs Styles pleaded not guilty to the charge.

It is alleged on January 19 at Lewis Yard, the accused men were found in possession of an unlicensed firearm and ammunition.

Both pleaded not guilty to the charges.

Mr Wallace asked for bail to be granted to his clients, Karame and Tanika Styles. He said the couple was not a flight risk and would not interfere with the witnesses who are police officers.

“I am asking you to grant bail as the matter is not one involving violence. These are mere accusations, and my clients are presumed innocent. They have a right to have their case heard at a reasonable time,” said the attorney.

Magistrate Smith said he would consider granting bail to Mrs Styles, who is pregnant, but Mr Wallace expressed concerns about her being able to meet the $10,000 bail with two sureties.

The judge set bail for Mrs Styles at $8,000 with one or two sureties and asked that a job letter be presented verifying an annual income of $25,000 or more before her release.

Magistrate Smith denied two men bail, explaining that the nature of the offence involves firearms and he is not able to grant bail.

“Firearms are prominent in this country, and every other day someone dies in this country because of firearms, and one of the guns in question is a military-type gun,” he said.

He said the accused might apply to the Supreme Court for bail. They were remanded to the Bahamas Department of Correctional Services until November 13 for trial.