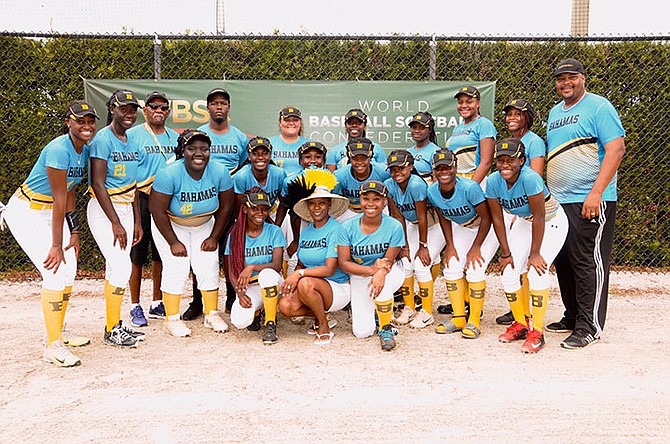 After getting off to an impressive start, the Bahamas suffered two consecutive losses yesterday as round robin play heated up at the XII Junior Worlds Softball Championships in Clearwater, Florida.

The team, posing with the Bahamian flag, was featured in a article written by Maren Angus that was posted yesterday under the headline: Bahamas makes history in WBSC Jr World Championship debut.

It came after they blanked Israel 10-0 in their first game in Section B on the first day of competition on Monday.

However, the team lost a double header yesterday as the No.11 ranked Brazil won 10-2 in the opener and unranked Peru won 8-2 as the Bahamas fell to 1-2.

"In our first game today against Brazil, we came out flat," said coach Shane Albury. "I didn't see the tenacity that we had when we won our first game. We made too many errors on the infield. I counted four base hits that Brazil had in the entire game. Everything else was based on errors.

"In the second game, we didn't hit the ball like we are capable of and we had one bad inning."

In that second inning, Peru's designated player Natalie Alergria ripped a grand slam home run on the heels of a walk and two errors to put the Bahamas out of contention. "It's the simple things that make a whole lot of difference," Albury said. "Once we minimise the errors and the walks and hit the way we know we can hit the ball, we will be in a much better position."

The Bahamas team, managed by Stephen 'Bishop' Beneby, will play another double header today as they take on Australia at 11am and close out against the Netherlands at 4pm.

Their final round robin will be played on Thursday against top-ranked Japan. The playoffs will get underway Friday and run through Sunday when the final is played.

Peru 8, Bahamas 2: After taking a slim 2-1 lead at the end of the first inning, Peru got a glam slam home run from Alergria in the top of a six-run second inning to put the game out of reach. Alergria, the sixth batter in Peru's line-up, went 3-for-4 with a double and a homer, driving in a total of six runs (RBI) and came across the home plate once.

The six runs in the second was all that Peru needed to win their first game as the Bahamas didn't score again until the bottom of the fifth.

Centerfielder Denisha Woodside was 2-for-3 with a run batted in (RBI) and scored one of the Bahamas' only two runs in the game. The other run came from Danasjah Hield, who came in to pinch run and ended up playing left field. Catcher Altavia Hall and third sacker Monet Cartwright were both 1-for-2.

Brazil 10, Bahamas 2: Capped by a couple of errors by the Bahamian team, Brazil took advantage by taking a 1-0 lead at the end of the first inning and extended it to 5-0 in the second.

They added three more runs in the third and two in the fifth to complete their scoring barrage.

The Bahamas didn't score until they came up their first one in the bottom of the second and they finished with another one in the fifth.

Brazil used two pitchers as starter Tammy Shiroma got the win in the first three innings as she tossed a four-hitter, giving up one earned run with a walk and four strike outs in the 14 batter she faced.

Priscilla Shimatsu came in relief in the final two innings to give up six hits and one earned run. She struck out two of the ten batters she faced.

Sari Albury went the distance, giving up 12 hits, 10 earned with three walks against 27 batters she faced in going the distance in five innings as she suffered the loss.

Third sacker Altavia Hall had a perfect 2-for-2 with a run batted in (RBI) and a run scored; second sacker/shortstop Kendalia Turner was 2-for-3 with a RBI; losing pitcher Sari Albury and first sacker Dachye Stubbs both went 1-for-3 and both Mia Turner and Ramona Hanna were 1-for-1.