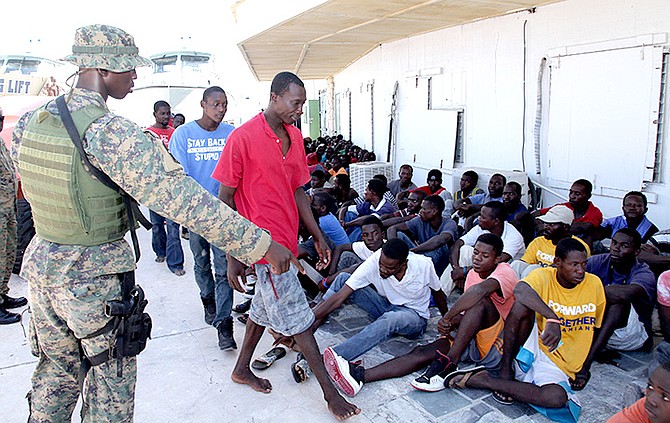 A Royal Bahamas Defence Force marine is pictured giving directions to some of the Haitian migrants at the RBDF Base on July 26. Photo: RBDF Marine Seaman Kyle Smith

Immigration Director William Pratt yesterday confirmed there has been an upswing in the apprehension of Haitian migrants; however, he noted that it was a seasonal trend due to favourable weather conditions.

Ten Cubans were repatriated yesterday, he said, with some 50 Dominican migrants scheduled for repatriation to the Dominican Republic on Friday.

Due to the large number of Haitian migrants apprehended this week, Mr Pratt said the department was considering another repatriation exercise next week.

On Tuesday, RBDF officials searched a Haitian sailing sloop off Galloway Cay, Long Island. The officials apprehended 124 suspected Haitian nationals, according to a RBDF report, which noted that the discovery followed the apprehension of 66 migrants on Little Inagua.

Both groups were transported to Nassau shortly after 11am yesterday, the RBDF report stated.

“This is the fourth migrant vessel that has been apprehended in Bahamian waters for the month of July,” the RBDF’s statement continued.

“On the 15th of this month, a joint operation by the Royal Bahamas Defence Force and Bahamas immigration officials resulted in the apprehension of 64 migrants on Ragged Island and on July 3, a total of 69 Haitian migrants were apprehended on the Great Bahama Bank by HMBS Lignum Vitae.

“The Royal Bahamas Defence Force remains committed to protecting the territorial integrity of The Bahamas and keeping our borders secured.”

Looks like the PLP were trying to smuggle in new voters.

When will government begin dealing with the fact that all of these illegals have collaborating Haitian or Bahamian sponsors, relatives, or friends in the Bahamas organizing these smuggling operations?

Before repatriating illegals, these people should be interrogated to identify who the receiving parties were to be so we can charge them with illegal human smuggling!

Lord the people wearing PLP shirts to blend in when they hit land! What a time!

This human smuggling operation is deeper than we know.