Gray: I Have Nothing To Hide 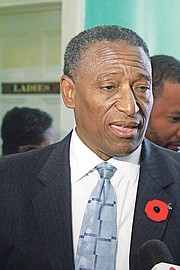 FORMER Minister of Agriculture V Alfred Gray yesterday denied tabloid reports that he was assisting police with any investigation into alleged wrongdoing in his ministry and related agencies.

Mr Gray rebuffed speculation that he was involved in any anti-corruption investigation, and furthered that he was not concerned about the revelations made by the new Free National Movement administration.

"Let them," he continued. "I have nothing to hide, I've never done anything in my public life that I need to be ashamed of."

Last month, the RBPF's Anti-Corruption Unit was said to be investigating 11 files from various government departments and public corporations.

Critics, including Official Opposition leader Philip Davis, have claimed that the unit was formed to conduct a "witch hunt" against the former Perry Christie-led administration.

National Security Minister Marvin Dames dismissed those claims earlier this month, insisting that if a complaint is made against someone "no matter who you are" police will investigate the claim and bring charges where warranted.

Former Progressive Liberal Party Senator Frank Smith was charged in Magistrate's Court with 13 counts of extortion, and a count each of attempted extortion and bribery on July 21.

The charges stemmed from the alleged solicitation of $65,000 in bribes from a woman he is said to have assisted in getting a contract.

Earlier this month, former Environment and Housing Minister Kenred Dorsett was charged in Magistrate's Court with a single count of misconduct in public office and four counts each of extortion and bribery.

It was alleged he used his former ministerial position to extort and solicit $120,000 in bribes from Johnathan Ash.

Last month, former deputy speaker of the House of Assembly Dion Smith was released from police custody without being charged as investigations into alleged "theft by reason of employment" at the Bahamas Agricultural and Industrial Corporation continued.

Mr Smith was appointed as executive chairman of the organisation under the Christie administration.

The former deputy speaker of the House of Assembly was the ninth person arrested, questioned and released in connection with the matter; however, no formal charges have been brought against anyone.

Assistant Commissioner of Police Paul Rolle told reporters on July 13 that the investigation was completed and police found no evidence of wrongdoing.

Gray is a corrupt minnow.....it's the corrupt whales our new government needs to thoroughly investigate and prosecute first, with an eye to recovering as much as possible of what was stolen from us, the people.

The man is shameless. This is no surprise!

The COP was forced to let him go and AMG released him and Perry slapped him on his wrist ....... But his involvement in Acklins contracts, BAMSI, Old Zeph Newbold case and the Chinese fishing deal is worth reopening for investigation ......... Anyone ask how he he got his mansion in Acklins yet??????

Regardless 2 years, 10 months ago

The FNM Government should see what they can do to help the poor people of the Bahamas., instead of looking for persons to Bring before the courts. they will only sustain the blood thirsty for a while. but once they realize they can not pay bills with these actions they will soon grow weary of it all. then they will watch doc and his members chew while they swallow.

I think we will see this man, JF, OW, BD, GHM or PGC HUAL-IN SOON!! PGC and GHM may only get haul in but the rest of them will get charged before the court!! SG, KD, JF, BD, OW and AG are going to jail!! Mr. Smith stand a good chance to "slip" out of his hole. . .turn crown probably!

The departments of education, NIB and road traffic will see a number of lower-hanging fruits "gern ta jail" in rapid succession too!