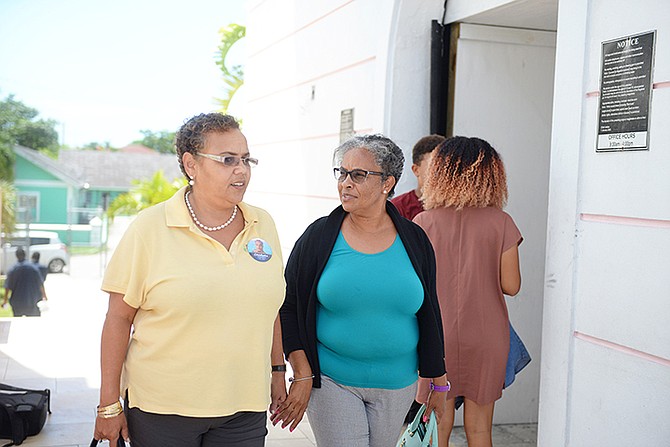 The family of the late Christopher Turnquest pictured outside the Coroner's Court this week. Photo: Shawn Hanna/Tribune Staff

THE coroner's inquest into the death of Christopher Turnquest got underway yesterday with the court presented with testimony on sea conditions, weather patterns and the varying extent of vessel damage after the October 2016 incident.

Through nearly an hour of questioning, the five-woman jury heard Royal Bahamas Defence Force Petty Officer Force Kevin Seymour, the officer in command at the Harbour Patrol base on the night of the incident, give his account of what he knew of the incident.

Turnquest, 25, is alleged to have been in the Bay Street Harbour in a 13-foot skiff along with his cousin, Tino Turnquest, when their skiff was struck by a RBDF vessel manoeuvring through the harbour on Sunday, October 2, 2016.

According to the family, an autopsy of Christopher's body revealed he died of blunt trauma to the body.

P/O Seymour, a 32-year veteran of the force, provided testimony that due to the impending nature of Hurricane Matthew, weather conditions on October 1 had deteriorated to a degree that prompted a marine advisory for all small craft operators operating in waters around New Providence.

P/O Seymour also testified that Response Boat 1, along with Patrol Vessel P-40 of the RBDF's fleet, had at around 6.11pm that day, travelled to waters just outside of the western harbour of New Providence, responding to an incident involving two fishing vessels.

His testimony added that around 8.11pm, he received reports simultaneously from both vessels that Response Boat 1 had collided with an unknown object resulting in "a gentleman in the water".

P/O Seymour told the court that once made aware of the incident and briefed on its particulars, he moved a patrol vessel on reserve that evening into the active line of duty, and subsequently dispatched it to aid in what had, by that time, expanded to a "search and rescue" operation.

However, he later amended that testimony, to say except vessels being operated in emergency response situations, as in the case of Response Boat 1.

Attorney Murrio Ducille, representing the interests of the family of the deceased in the matter, argued that the extent of the damage sustained by the vessel occupied by Turnquest, showed damage conclusive of a collision with a vessel travelling in excess of 30-knots.

At that point, attorney Ramona Farquharson-Seymour, lawyer for the RBDF, countered with a status report of the vessel's condition before and after the incident.

The court also heard testimony and concerns over the status of lights, horns, engines and structure of both vessels involved.

Additionally, the court was presented with three photograph albums containing photos of both Response Boat 1 and the skiff operated by Turnquest.

In addition to these exhibits, the court heard testimony by the persons responsible for collecting and compiling these photograph albums.

The proceeding was initially expected to start on Monday, however when Turnquest's relatives arrived at court, they were told the coroner had taken two "personal days."

Then on Wednesday, the matter was delayed once again, this time because the legal team for the RBDF claimed it had not been properly briefed.

Coroner Jeanine Weech-Gomez called the situation "unfortunate," and blamed the RBDF for the delay, saying: "I don't know why the Defence Force waited until the eleventh hour to get this going. It's not like this matter happened yesterday. It's most unfortunate having regard to all the circumstances. They were informed from April and should've been ready for Monday."

The matter is expected to continue today at 11am.