Bahamas Alarm At Us Withdrawal From Paris Climate Change Deal 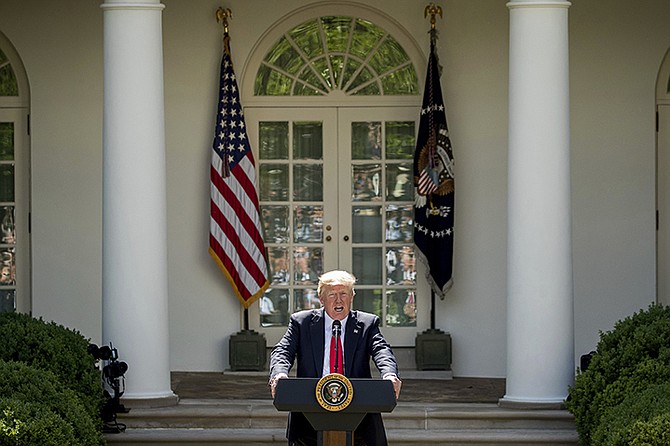 President Donald Trump speaks about the US role in the Paris climate change accord on Thursday, June 1, in the Rose Garden of the White House in Washington. Photo: Andrew Harnik/AP

THE Ministry of Foreign Affairs has expressed The Bahamas’ concern regarding the announced withdrawal of the United States from the Paris Agreement on climate change.

The ministry noted that The Bahamas remains “committed” to the climate accord.

“While each nation must determine its own course on international matters, the prospect of the effects of climate change are particularly significant for low-lying, coastal, small island developing states (SIDS) such as The Bahamas, the very existence of which stands to be adversely impacted by climate change and global warming,” a statement from the Ministry of Foreign Affairs noted.

“The Bahamas remains committed to the Paris Agreement which was signed by 195 parties and ratified by 146 countries plus the European Union, and its aspiration to reduce risk to economies and lives everywhere, and to build a secure and sustainable world.

“The Bahamas will continue to work with its partners in the context of the Paris Agreement, as well as its neighbours in the United States in ongoing efforts to mitigate the long-term effects of global weather on states in the region,” the statement also noted.

Last Thursday, US President Donald Trump announced he was withdrawing America from the Paris Agreement, which some critics see as a blow to the worldwide effort to counter global warming.

“We’re getting out,” Mr Trump said Thursday at the White House. “And we will start to renegotiate and we’ll see if there’s a better deal. If we can, great. If we can’t, that’s fine.”

The decision was widely denounced by American politicians, pundits and leaders from around the world.

“The nations that remain in the Paris Agreement will be the nations that reap the benefits in jobs and industries created,” Mr Obama noted in a statement. “I believe the United States of America should be at the front of the pack. But even in the absence of American leadership; even as this administration joins a small handful of nations that reject the future; I’m confident that our states, cities, and businesses will step up.”

In May 2015, then Prime Minister Perry Christie told Parliament that with 80 per cent of The Bahamas’ land mass within one metre of sea level, climate change was a growing threat.

“Our situation is rendered especially urgent in the face of information that ocean acidification, sea surface temperatures and sea levels are already rising,” he said.

“These processes, particularly sea-level rise, will therefore irreversibly change the geography and ecology of many coastal states and territories. It has been projected that responding to these factors can have particularly disastrous consequences, causing a perpetual recession in each of the Caricom member states for a significant period as our infrastructure, built environment, settlements and economic well-being are concentrated in coastal areas prone to flooding and inundation.

“The region’s challenge associated with the ongoing climate change negotiations is that even if the goal to limit global warming to 1.5 or 2°(degrees Celsius) is achieved, the Caribbean will experience severe adverse impacts for which stronger programmes of adaptation would have to be implemented,” Mr Christie said at the time.

America joined Nicaragua and Syria as the only nations that did not sign the Paris Agreement.