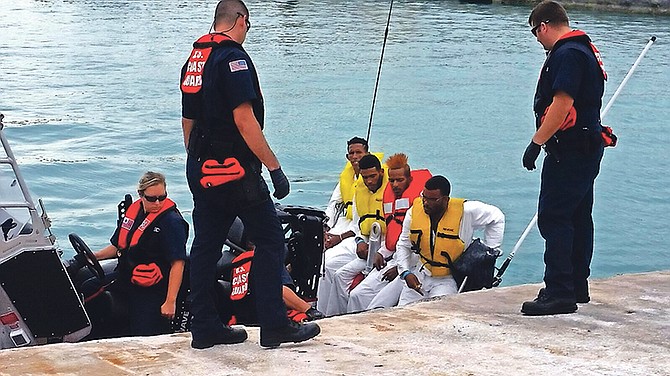 Some of the Cuban migrants detained after being spotted on Cay Sal Bank.

NINE Cuban migrants stranded nearly two weeks on a cay in the Cay Sal Bank were spotted and rescued by the United States Coast Guard and taken to Grand Bahama on Saturday.

According to an immigration official, the migrants had left Villa Clara, Cuba, for the US on May 28 on a rustic vessel, but developed engine trouble and were forced to seek refuge on a cay.

They were spotted on Friday, June 9, by the US Coast Guard and taken aboard the USCG Cutter William Trump which arrived at Freeport Harbour around 5pm on Saturday.

Immigration officer Napthali Cooper reported that the migrants – all men – were taken to the Department of Immigration where they were processed and examined by a medical team from the Disease Surveillance Unit of the Public Hospitals Authority.

Mr Cooper said the migrants were flown to New Providence on Monday and would be detained at the Detention Centre to await repatriation.

Wow, Look at the guy with the rooster comb spiked, coloured hair. Doesn't somehow fit the typical image of migrant.