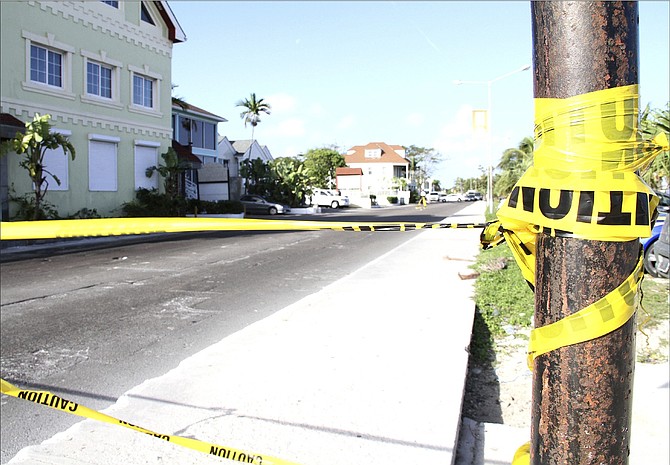 THE Bahamas has the 11th highest homicide rate in the world, triple the rate considered by the World Health Organization as an epidemic, Health Minister Dr Duane Sands revealed in the House of Assembly yesterday.

Dr Sands also revealed that The Bahamas has the “highest incidents” of diabetes in the world and 79.2 per cent of the population is obese or overweight.

Addressing parliamentarians during the budget debate, Dr Sands said the number one cause of death of the Bahamian male is a bullet and a recent crime study shows that between 2012 and 2015, 78 per cent of murder victims in The Bahamas died as a result of gunshot wounds.

“We are in the world leaders in ways that are destructive to our social and economic well-being. We are one of the leaders in trauma due to gunshots and stabbing. The probability of dying from these types of injuries far exceeds the risk of death from cancer of HIV/Aids in the Bahamas,” Dr Sands said.

“From 2012 (to) now, the Bahamas holds the distinction of having the 11th highest homicide rate in the world. We are one of the most violent countries in the world; we beat, stab, shoot and rape each other at an unacceptable rate. Our homicide rate is triple the rate considered by the World Health Organization (WHO) as an epidemic. It is largely due to the professionalism of our health care team that our murder rate is not dramatically higher. In the last few years the number one cause of death of a Bahamian male is a bullet, not a stroke, not diabetes, but a bullet. He said the country’s infant mortality rate had hovered between 18 and 23 per 1,000 live births over the last four years - which are the highest in the non-Latin Caribbean.

“In an important study, 90 per cent of Bahamians eat less than five servings of fruit and vegetables a week as compared to 47.3 per cent in 2005. If we look deeper the problem starts from birth. Breastfeeding rates in the Bahamas are low and have varied between 10.9 per cent and 29 per cent. Breastfeeding for the first 16 weeks is considered a good start to a lifetime of healthy nutrition and has been shown to protect babies from diseases but we don’t believe in breastfeeding.

Dr Sands said at last tally, in December of 2014, there were 8,630 people living in the Bahamas with HIV/AIDS, representing 2 per cent of the population and one of the highest incidences outside Sub Saharan Africa.

“While we have dropped our national prevalence from three per cent to two per cent, far too many people are being diagnosed late and we are still seeing increasing cases among our youth,” he said.

Dr Sands said it is because of these reasons and other factors that the country’s health care costs are so high. He said many persons are well on their way to the development of catastrophic complications of illnesses, violence and trauma.

While this should be a major concern to every single Bahamian, what should be of even more concern is that the detection rate for murders is declining. It simply means that more persons who are committing murder are getting away with it.

What do you expect when major players in the PLP hierarchy have devoted most of their legal career to defending gangsters and drug runners...you expect them to honestly hunt down criminals? They embrace it!!

Comrade Dr. Duane, the Red Movement Government's first order of business is not cure infant mortality, blood sugar,. aids, murders, assaults, stabbings, gunshot wounds - it's to cure "Broke People's" epidemic.
Minister Dr. Duane - if your government can work towards offer a cure for "Brokness" - the rest will be well on its way correct themselves on they own.

Guys, this is not a political issue; this is, quite simply, a national issue and a national security issue. Please, let's get away from the politics and open our eyes to the real serious issues facing our country.

I'd like to take this moment to thank the PLP for this. It took a lot of hard work over several different governments but they did it; they put the Bahamas on the map for something else other then rum drinks and beaches. YAY PLP!!!

Damn !! We have to ban those old, fat white ladies coming here for sex with our Bahamian yout'. It's causing the country to go to hell in a handcart.

There is a thought that struck me here about the gun proliferation. It takes capital to import guns. The capital must either come from the drug trade ... or ... a rich someone who pretends to be legit and knows they can make vast profits by running guns into the country. If we only had an intelligence agency that had the smarts to track this down.

maybe it comes from the CIA..just maybe! The guns and the drugs. Counterintelligence!

Banker you need to go back for training. You are blowing your cover by acting so concerned, citizen!

There is a French term called force majeur that is used often in contracts. It means superior force, or unstoppable force, or major insurmountable force. For example, if you read your international airline ticket closely, sometime they reference force majeur in relation to say an act of terrorism or an act of war. A hurricane is a force majeur.

I am half convinced that the situation in the Bahamas is force majeur -- unstoppable. You posited in an earlier statement that perhaps the CIA is supplying guns to the crooks in the Bahamas. While that may be a wild conspiracy theory, it also may be true. A possible reason is that they want to destabilize us to get rid of the Chinese influence. Now don't go running off believing this, but it is a possibility.

Back to force majeur. If it's the CIA, its a force majeur. Can't fight it. If it is rich guys in the Bahamas coupled to gangs looking to make money, then it becomes unstoppable, unless you cut the head off the snake -- the guys funding the gun running. If its the drug trade funding the gun running, then it becomes a force majeur as well, because it is like playing Whack-A-Mole. You get one, and another one pops up. The only way to get rid of it, is to empower the low level gangs who do the work with good jobs -- ie turn around the economy.

Did you read Freakonomics (or maybe it was Super Freakonomics) -- about the low level drug dealers live with their moms? They een making the big money. If these low-level guys had decent jobs, they wouldn't be fueling the drug trade as much. And then the force majeure would become a solvable problem. We need to turn this damn economy around !

I am a little disappointed in the FNM now. Minnis says he is the new sheriff in town, and yet he hasn't fired a shot yet. SLOW !! Someone needs to light a fire under the asses of the cabinet. When Mobutu of Zaire put up the $10 million for the Ali fight, he wanted to show that he was the new sheriff and he wanted the criminal elements to fall in line. He had mass arrests of a 1000 prominent crooks and political cronies. They were marched off to the major soccer pitch and told to count off in 10s. Every tenth guy was shot -- no matter who he was or how politically he was connected. It was a way of showing that the old order was dead and your political connections were useless.

I don't necessary want anyone shot (I would make a few exceptions for the major PLP players) but I do want to see them crap in SLOP buckets in Fox Hill for the rest of their miserable lives. Minnis said that he would do it, and it een happening. The "Its' early" excuse is over.

The appearance of AK-47s (the Kalashnikov) on the street is highly interesting. If they were just AR-15s then one could say that it was gun runners buying them cheap in the US and shipping them here. AK-47s are used by all the bad guys who want deadly weapons cheap. They are many manufacturers and they all come from distant places. Someone is ordering them from one of the 27 manufacturers (most of them are unlicensed makers in places like Bulgaria, Iran, Cambodia, Columbia) and bringing them here.

If we had a real intelligence agency instead of the desk jockey bozos, we would trace the origins of the AK-47s on the streets of Nassau and work backwards figuring out who or how they got into this country.

Maybe we need to all spend more time in the web shops. It is safe, and when you walk out the doors of Island Luck you won't have any money to buy guns, bullets, junk food or have any money for rum or crabbie.

Those Who Have Wept

God Calls Us to Pray with Tears

Now this is batsh*t crazy for this discussion. A little detached from reality.

problem can be mitigated by 60 day amnesty to surrender any illegal firearm e.g AK 47 and unlicensed firearms. if course these are the gangster's tools so dont expect them to respond. then back to the days of 4:00am house raids where you suspect them to be and random traffic searches day and night indefinitely. if caught, $10,000 fine and 10 yrs in prison.. or how about mandatory death sentence? they have it in Asia for drug trafficking and they dont seem to have a drug problem...