Shameko Smith Selected By Rockies In 13th Round 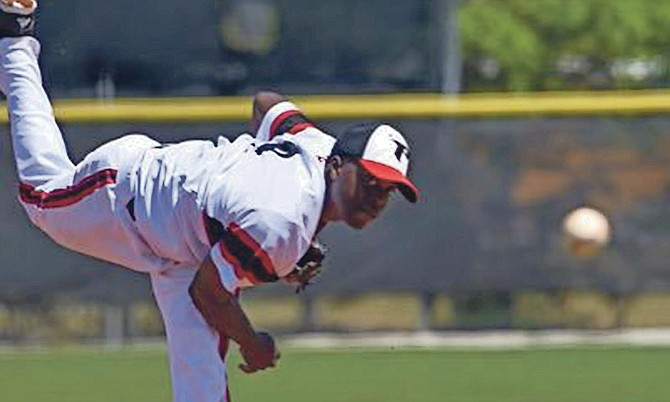 Shameko Smith in action on the mound for the Polk Community College Eagles.

Another Bahamian baseball talent received an opportunity to further his career at the professional level through the Major League Baseball Draft.

Shameko Smith was selected by the Colorado Rockies organisation yesterday, in the 13th round with the 386th overall pick.

Smith, an Abaco native, recently completed his freshman season with the Polk Community College Eagles in the NJCAA.

Smith made his debut on January 28 and delivered six strikeouts to lead the Eagles to a 5-2 win over Eastern Florida State College.

In five innings he allowed just two runs on four hits. He posted a season-high eight strikeouts on three occasions. The first was on February 11 in a 12-6 win over the University of Tampa JV, in a 3-2 win over South Florida State College on March 18, and again in a 7-1 win over Florida Southwestern on April 7.

His longest appearance of the season was April 13 against South Florida State College when he recorded six strikeouts and pitched seven scoreless innings.

They were eliminated in the FCSAA State/NJCAA Region Tournament after losses to Palm Beach State College and State College of Florida, Manatee-Sarasota.