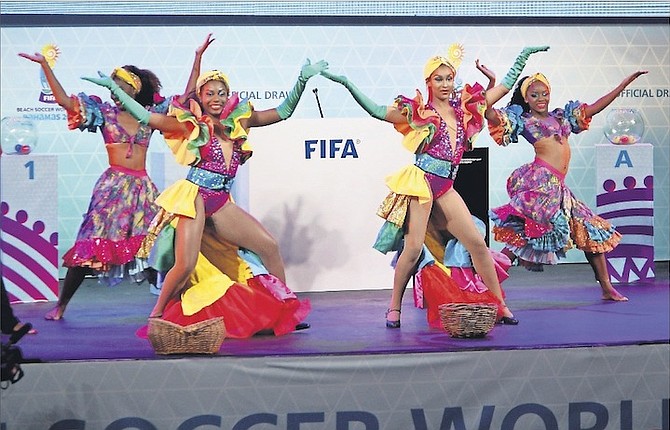 THE hosting the of the FIFA Beach Soccer World Cup Bahamas 2017 represents several milestones, not only for the Bahamas but for FIFA and the sport of beach soccer round the world.

Host Bahamas Football Association’s president Anton Sealey made the remarks during the Official Draw for the FIFA Beach Soccer World Cup Bahamas 2017 in the Atlantis Theatre on Paradise Island on Tuesday night.

The event, scheduled for April 27 to May 7, comes on the heels of the BFA’s successful hosting of the CONCACAF Beach Soccer World Cup Qualifier that was held over the weekend.

Panama defeated Mexico 4-2 for the title and the two teams booked their return trip to the Bahamas for the World Cup where they will represent CONCACAF along with the Bahamas, who was awarded their spot as the host.

The Bahamas finished sixth in the CONCACAF championships after losing 4-2 to the United States of America, whose fifth place denied them an opportunity to compete in the World Cup.

The Bahamas is making history as the first country in the Caribbean to host a FIFA Beach Soccer World Cup, joining major global destinations like Brazil, the United Arab Emirates, France, Italy, Tahiti and Portugal, who staged the previous eight.

But Sealey said their newly constructed beach soccer stadium, which was completed just in time to host the CONCACAF Championships, is the largest permanent facility ever constructed for a FIFA beach soccer event.

“FIFA Beach Soccer World Cup Bahamas 2017 is an investment that will have both short term and long term benefits to the local community,” Sealey told a large audience that included Prime Minister Perry Christie, Minister of Youth, Sports and Culture Dr Daniel Johnson and FIFA executives.

“It will be the longest continuous competitive event ever held in The Bahamas, bringing 16 of the best beach soccer teams from around the world and many enthusiastic beach soccer fans to experience the unparalleled beauty and unique culture of The Bahamas.”

Sealey expressed the BFA’s gratitude to FIFA for affording the Bahamas the opportunity to stage the prestigious event, which he called a critical part of the foundation on which the future of beach soccer in The Bahamas is built.

“The Bahamas Football Federation has worked closely with our stakeholders, including local soccer clubs and school soccer teams to drive the development of soccer in The Bahamas for many years,” he stated.

“We’ve gained a groundswell of support and seen tremendous growth in local interest and participation of soccer.  Indeed, it is our privilege to have the opportunity to do the same with beach soccer, one of the most dynamic and quickly growing sports in the world.”

Sealey assured the audience that the BFA is committed to the strategic development of beach soccer in the Bahamas by educating the youth about the sport and training the next generation of competitors from this region.

“In addition to showcasing the breathtaking beauty of these islands and the superb talent of the athletes, this event also puts our rich cultural heritage on display,” he said.

“We believe that it will be important for the visitors to the FIFA Beach Soccer World Cup Bahamas 2017 to taste the distinctive cuisine and hear music that will transport them to a world of unforgettable experiences. “

Sealey summed up by saying that with the continued support of the Government, Corporate Bahamas and the local community - everyday people who love beach soccer - will help to increase the popularity of the sport, not only in The Bahamas, but also around the world.

“The Bahamas Football Association and the Local Organising Committee look forward to seeing you back in the Bahamas in April for 10 days of intense competition with more excitement, energy and pure, good vibes than you’ve ever seen before,” he said.

Sealey was referring to the Official Song of FIFA Beach Soccer World Cup Bahamas 2017, ‘Pure, Good Vibes.’ The song was written and produced by a team of the most talented musicians in the Bahamas and sung by Ric Carey during the Official Draw.

For the local soccer team this is really a great opportunity to watch the best players in action. The authorities need to take further steps to ensure a positive environment for the local teams. They could partner with soccer training facilities to give the local players an opportunity to train with cutting edge training gears. SocrLabs is one such facility which offers hardcore soccer training programs for even https://www.socrlabs.com/blog/little-...">little kickers vernon hills area. The training programs are designed to make the players most skilled.