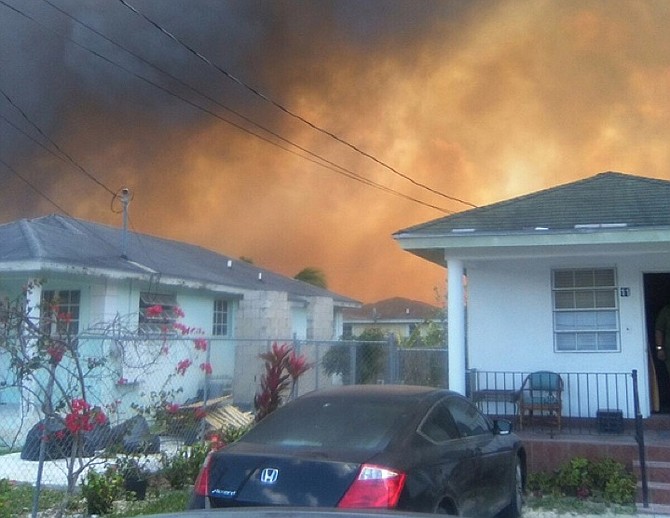 ANGRY home owners in Jubilee Gardens yesterday expressed disgust and concern that neither the Progressive Liberal Party nor the Free National Movement have done enough to prevent the frequent fires at the New Providence Landfill that have caused some of them to develop respiratory issues.

Their comments came as a massive fire was raging at the landfill, which officials believe was started by a smaller bush fire off Fire Trail Road that spread to the city dump. The fire blanketed Jubilee Gardens and surrounding areas in thick, black smoke and threatened several homes, prompting officials to order an evacuation of the area.

However, not everyone was willing to leave their homes.

One resident, Muris Campbell, who refused to evacuate, told The Tribune she has hurricane impact windows and will stay in her home to protect her property. However, she was concerned that officers, who barricaded the entrance to the subdivision, would not let her return to her home to assist her grandchildren, who were in the house and scared.

“I need to get my grandkids. Three of them are in there, one is 11 and one is nine. I have been here from (former Prime Minister) Hubert Ingraham cut the ribbon,” Ms Campbell said.

“Everyone knows how this place is, they see how it looks when the dump catch on fire. They see what we going through. No one is hearing us, no one is helping us. Where must I go if I evacuate, who will help you? Everyone don’t have people to help. I soon retire and I must stay home to this? No one helping you.

“When you speak out what will happen? I haven’t heard from anyone in the house, I can hardly talk. I wish one of these people come to my door and ask for my vote, they will get what they come for,” she said.

Another resident, Carton Duvalier said he developed respiratory issues because of the frequent smoke and he is “pissed off” that no one seems to care.

“No one has done anything for us, the issue is poor management on all these governments,” he said. “The dump was here before we came here, we moved here in 1996 and the dump was here and they continued to build and now people can look out their back window and see the dump.

“I developed respiratory issues because of this. When I went to the doctor because I couldn’t breathe properly he asked me where I live, I say I live Jubilee Gardens and the doctor say that’s why I have problems. Everyday, when it isn’t the smoke, it’s the scent. Come on, something have to done about it. I blame the government, the PLP, the FNM and the residents because we sit here and we suck it up and do nothing. People lives being threatened, people homes being threatened - imagine the kids that have to sleep in this. This is ridiculous and I am pissed off,” Mr Duvalier added.

Member of Parliament for Tall Pines, Leslie Miller said the government “has to find the answer.”

He said his constituents cannot continue to suffer but the solution is not to move the dump.

“The foreign people that was here gone, and now the dump is back in the government hands,” said Mr Miller, who tried to help the situation by pouring water on smouldering areas in Jubilee Gardens. “Hopefully they do something quick, but the answer is not to move the dump, a minimum for the dump is 200 acres of land, there is nowhere in New Providence that is close to that to put up a new dump, we have to run this properly and keep the stragglers out. For the last 30 years people have been starting these fires intentionally.

“Some people just sick and they like fire and with this wind there is nothing you can do but move out of your home because of the smoke. If someone decides they are going to light a fire at the dump, what can you do? It’s arson and it happens from time to time, people get mad and light the dump. There is nothing you can do about it, you cannot put up a new dump, you just have to manage it better and have better security. I feel sorry for these people, this is horrendous.”

Fire Chief, Superintendent Walter Evans said no lives were lost and he had no reports of homes being destroyed or damaged by the blaze up to press time, however he said several homes were threatened. He could not say how many residents were evacuated.

He said Police Fire Services were also fighting blazes in other areas: near Loyola Hall, the National Emergency Management Agency and the Bahamas Youth Camp, which are all on Gladstone Road and another fire on Charles Saunders Highway.

The city dump has been plagued with recurring fires for a number of years. Renew Bahamas was engaged by the government in 2014 to manage the landfill and help address the matter, however the company suspended its services in the aftermath of Hurricane Matthew.

Since then, The Waste Resources Development Group (WRDG), a consortium of 10 Bahamian waste management groups, has submitted a proposal to take over the operations at the landfill. Yesterday Prime Minister Perry Christie confirmed that two companies, both Bahamian, have submitted bids to run the dump. Mr Christie, who toured the affected areas, said the matter should be resolved shortly.

Residents who live in Jubilee Gardens and surrounding areas were advised by the government to evacuate, with the Kendal Isaacs Gym being a designated shelter for anyone displaced by the fire.

“The National Emergency Management Agency (NEMA) has activated its emergency plan and all available resources have been mobilised,” a statement from the Office of the Prime Minister said.

“Although it is too early to be certain, at first sight it appears that a number of fires were started in the area. Because of the high winds currently being experienced on New Providence, it appears that at least one of those fires blew across the boundary and ignited the public landfill,” the statement added.

The statement also said the government will reach out to international partners for assistance, if and when the situation warrants it.

Repost - Our winds blow from the southest to the northwest for most of the year which means the dump ideally should be relocated to somewhere in the Clifton Bay area. This is the reason why Runway 14 at Nassau International Airport is our nation's busiest runway. Runway 14 has a compass heading of 140 degrees - almost due southeast. For safety reasons aeroplanes take off and land into the wind to the maximum extent possible. Only on very occasional days would residents of Lyford Cay, Old Fort or Albany be inconvenienced by smoke from dump fires if the public dump is relocated to the Clifton Bay area.

International partners? Can we never do anything properly ourselves?

No DDK, we can't do anything right. I was so upset when I saw all them government ministers watching poor peoples houses in danger and doing just what they been doing to help for 40 years. NOTHING.

I am glad we have a land fill run by a private entity here in Freeport!

But wait, wasn't the Environmental Levy (tax) on imports supposed to be funding Dump remediation? Or was that for Carnival? I forget,,,,,,

There is nothing that has been done cost effectively, properly or without graft for 50 years.

One resident, Muris Campbell, who refused to evacuate, told The Tribune she has hurricane impact windows and will stay in her home to protect her property.

This lunacy is always frustrating to see. How are you going to protect your home from a fire raging all around you? Why are people so willing to die for material possessions? These people have families but are willing to suffer injury or death for things that can be replaced or repaired. You can't replace a life or repair a lost one. And she left children in the home as well? So she was prepared to have those children either get injured or killed for a house?