Smoked Out: Residents Facing A Week Out Of Jubilee Gardens Homes 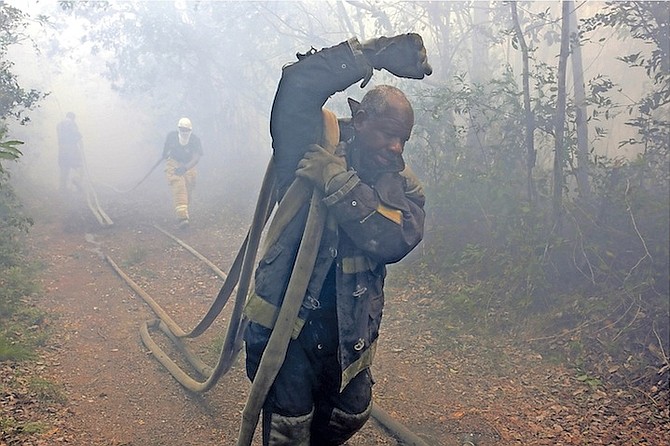 RESIDENTS in Jubilee Gardens will have to wait at least five to seven days before the evacuation order is lifted and they are “safely” allowed to return their homes, Minister of Environment Kenred Dorsett said yesterday.

At a press conference at the Office of the Prime Minister on Monday, Mr Dorsett said firefighters do not expect the fire at the New Providence Landfill to be extinguished for another five to seven days.

He said firefighters are battling two different types of fires, one at the landfill and a forest fire in the surrounding areas.

Residents in Jubilee Gardens were forced to evacuate their homes on Sunday after a massive fire at the landfill blanketed the community in thick, black hazardous smoke. On Sunday, the fire also threatened some homes in the area, however overnight reports indicated that no houses were burned or destroyed.

When The Tribune arrived on the scene yesterday, the visibility in some parts of the community was still very poor.

The fire also spread overnight, according to Fire Services Chief, Superintendent Walter Evans, who said the blaze threatened several buildings on Fire Trail Road, including one farm containing around 60 to 80 pigs, and fire fighters had to create a barrier around a gas company on Gladstone Road to prevent an explosion.

The fire also crept into the yard at Aquinas College high school on Sunday night but was extinguished before any damage could be done. The school is closed until further notice.

“I want to advise the people of The Bahamas of the two major obstacles we are having because of the dry weather,” Mr Dorsett said.

“We will probably be experiencing smoke for the next five to seven days. That is how long it will take to put this out. It will not be an easy fix and while we will be bringing thousands of loads of fill, there will be smoke emanating from the area for at least five to seven days.

“We are still not recommending people return to their homes in Jubilee Gardens. The wind changes direction throughout the course of the day but from what I have seen I do not think the police have changed their advise thus far in terms in returning to their homes,” Mr Dorsett said.

Superintendent Evans said while the landfill fire does not remain a threat for the people in Jubilee Gardens, the smoke has grown overnight and there is also a concern with “flying embers.”

“This is not a one- or two-day operation,” the Fire Services chief said. “If people believe this fire is going to be extinguished in one day that is not the case.

“Our strategy was to ensure homes were not destroyed and that worked well for us. We understand that people work hard for their homes and now that the threat of fire has been minimised, we now have to address the smoke concern and there has been some improvement.

“The colour of the smoke has changed from the dark colour to the light colour which indicates that some progress has been made,” Supt Evans said. “The homes are no longer under the heavy threat of fire. We had fires in the vicinity of Aquinas College and also the Bahamas Youth Camp but efforts were made to extinguish these fires. We also had smoke travel a quarter mile past the (Department of) Customs warehouse. The physical flames on the landfill have spread to a wider area and we are using our resources to ensure we provide relief to the residents.”

Supt Evans reiterated that the fire did not start at the New Providence Landfill. Officials believe the massive blaze started as a bush fire off Fire Trail Road.

He said the high winds have contributed to the rapid spread of the fire and fire fighters are battling “Mother Nature” as well as the blaze.

The firefighters and other authorities seem to be doing a great job in light of the circumstances. Let's confront a grander issue though; the dump needs to be retired, covered in topsoil, and grass planted atop it. The population density of New Providence warrants creating a new landfill site on another island. Everyone hates taxes, but 2 - 3 dollars a month from all households will help defray the cost of this necessary step.

But first, Crooked Christie and Leslie Miller need to be retired - forever!

Great job by firefighers! But why aren't they wearing masks to protect from the smoke???

“I want to advise the people of The Bahamas of the two major obstacles we are having because of the dry weather,” Mr Dorsett said. And these are Perry Christie and V. Alfred Gray....

And how come the PLP couldn't ask the chingros for better fire fighting equipment instead of weapons and tools to control the masses???? Wouldn't that have been much better spent??

Why don't they have masks??? SHAME ON MR DORSETT

I spoke with a chief fire fighter on Sunday about where the fire trucks were (we were off of Fire Trail road at that time). He said, and I quote "They are looking to see where they can get water". I chocked!!!! Question: does the cable beach fire station (part of the police station and only about 5 minutes away from the fire) have a connection to water? I would assume so. So, assuming that they do, I would think that the connection would be some sort of high pressure connection (or some other more technical term) that would allow them to fill up a water truck in say... 10 minutes. Does anyone know? I picture the connection as being directly to a large 12 to 16 inch water main with a sort of high pressure fire hose connection, with a valve, that allows large quantities of water to be transferred to a fire truck VERY QUICKLY. Am I WAY off in my logic?

Next time you see Christie give him the one finger salute that he gave us. Trust me... it feels good!

...or maybe they have masks but chose not to wear it...you know how Bahamians do things.

The fire didn't start at the dump???. That landfill has been smoldering for weeks while they sat back, 'watched' and did NOTHING. Ask the residents in the Fire Trail/Jubilee Gardens/Faith Avenue./Gladstone Road areas who have to close their windows at night so they don't have to inhale smoke emanating from the dump while they sleep.

Crooked Christie and Lady Smacker Miller both deserve to be given the royal shaft by the Bahamian people. Better still they should each be made to give the other their most hurtful middle finger!