‘This Is The Worst It Has Ever Been’ 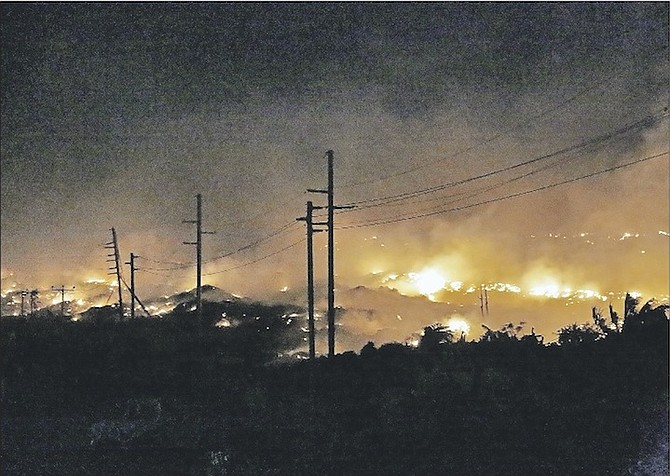 The Ongoing fire in the areas of Gladstone Road and the landfill last night. Photos: Terrel W. Carey/Tribune Staff

“THIS is the worst it has ever been,” residents in Jubilee Gardens told The Tribune yesterday as toxic smoke continued to blanket the community, making conditions unlivable and forcing residents to relocate temporarily.

The massive blaze that started in bushes behind Fire Trail Road and spread quickly to the New Providence Landfill and surrounding areas on Sunday moved into its second day of burning with no end in sight.

Hundreds of residents were forced to evacuate after the smoke made areas impassible and the air unfit for breathing.

The city dump has been plagued with recurring fires for a number of years, however many residents told The Tribune yesterday “it has never been this bad.”

Julie Johnson, an area resident for 12 years, said she never expected the smoke would “get this bad” and she cried when she was forced to leave her home not knowing what she would return to.

“Last night it was really, really bad, we evacuated around 3pm and we did expect it to get this bad,” she said on Monday. “This is the worst we have ever seen it. The smoke was horrible we couldn’t breathe.

“Thank God for (Tall Pines MP) Leslie Miller. He was walking through telling everyone to evacuate and helping people out, I must say Leslie and (his daughters) Leslia and Yasmin - they did an awesome job. When I came back this morning I was crying to see the back yard. My back yard was on fire. I was so scared to think I was coming home to nothing; that is how bad it got. I am relieved that my house is still standing but this is horrible,” Ms Johnson said.

Another resident, Renna Hudson, said it is time for the residents to come together and demand change. She said if the government cannot remove the dump, officials should condemn Jubilee Gardens and “buy the homes back” from affected persons.

“We evacuated Sunday night, my family and I. It has been horrible for many, many years. We have complained and nothing has changed. My family has been admitted to hospital and has made several trips to the emergency room because of these same fires,” she said.

“This is the worst it has ever been. The people of Jubilee need to come together and let the government know, now is time. Do not come around because it is election time and you want my vote, Jubilee people need help. I can’t even put it into words, this is the worst I have ever seen it in Jubilee,” Ms Hudson added.

“Are we going to wait until people drop down dead? This is the time that everyone needs to come together and get it right. This dump needs to be removed, if this is not removed then move Jubilee, shut Jubilee down. Condemn the homes, buy the homes back from the people and allow the people to move,” she said.

Ingrid Forbes, a mother of four including a disabled son, said she was afraid to return home after evacuating on Sunday because she feared her entire house would be gone.

“This the worst I have ever seen it and I was very afraid to come home and find my house gone. It is still here but it is damaged,” she cried.

“I don’t even know what to say. I have been here 12 years and this is the worst. I slept by my daughter and came home to my house partially burned. I cannot describe it. I tried to hose down my house, I hosed down the roof and then this big ball of flame came in my yard and I was afraid, I couldn’t see anything, this is the worst it has ever been.”

Yesterday, Social Services Minister Melanie Griffin said at least 13 families in the Tall Pines constituency were evacuated from their homes and made to receive temporary accommodations at the Kendal Isaacs Gymnasium.

Those families represented 54 people, comprising 34 adults and 20 children, she said.

Temporary accommodation will be made available on a first come, first served basis.

Sunday’s massive fire spread overnight, according to Fire Services chief, Superintendent Walter Evans, who said the blaze threatened several buildings on Fire Trail Road and fire fighters had to create a barrier around a gas company on Gladstone Road to prevent an explosion.

However no homes have been destroyed from the fire, according to officials.

Renew Bahamas was engaged by the government in 2014 to manage the landfill and help address the matter of recurring fires, however the company ended its services in the aftermath of Hurricane Matthew.

Since then, The Waste Resources Development Group (WRDG), a consortium of 10 Bahamian waste management groups, has submitted a proposal to take over the operations at the landfill. Prime Minister Perry Christie has confirmed that two companies, both Bahamian, have submitted bids to run the dump. Mr Christie, who toured the affected areas on Sunday, said the matter should be resolved shortly.

Leslie Miller has for years talked nonsense about any and everything, all the while only giving very occasional lip service to this most hazardous problem for his constituents. Only when the very predicable worst fire comes along and threatens his political butt does he begin yapping about the problem like a potcake ......pretending to care about his constituents.

The man is a joke.

funny that leslie is critical of the government, that his jive behind is a part of.

Nothing but hot, stink air comes out of his fat mouth and fat hip!

Worst it's ever been - but not worst it will ever be if they keep voting for the same two old parties.

I'm wondering if the fire was deliberately set. Operating a landfill means that you have to plan to bury garbage, and manage influx. It means buying sand and other materials to cover the garbage. A massive fire, hits the reset button and reduces the garbage to ashes. It is a quick way of getting rid of garbage without any cost.

I feel sorry for the people with asthma, including some relatives and a couple of good friends. For years, they used an over-the-counter asthma relief called Primatene Mist that was sold in Lowes at Harbour Bay. They couldn't afford the more expensive salbutamol. Primatene was banned because the propellant is bad for the ozone layer. There is a pill but it doesn't work as fast and is not as good as the mist.

This is really bad for tourism as well.