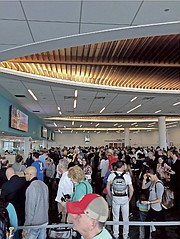 Long lines at immigration at the Lynden Pindling International Airport on Friday.

LONG immigration queues at the Lynden Pindling International Airport on Friday formed after weather conditions in Miami, Florida caused several large flights to land in New Providence in “unusually quick succession,” a spokesperson for the Ministry of Foreign Affairs and Immigration said yesterday.

According to reports reaching The Tribune, some tourists expressed frustration and reported waiting for up to two hours to clear the immigration checkpoint, saying the experience affected their view of the Bahamas.

However, a government spokesman said yesterday that the problem had nothing to do with staff quantity as officials take care to “organise staff schedules so that the lines do not become overly long or onerous.”

“However, during peak travel times a wait of 30 to 40 minutes to clear immigration is considered within the industry standard,” the spokesperson said.

“If there is a specific complaint from a member of the travelling public, the department would be happy to have it investigated. It is worth noting that during the weekend of Friday, March 3, at no time did the baggage carousels have to be cleared because entering passengers were delayed in clearing immigration and collecting their luggage.”

The ministry’s statement added: “The public is assured that in the normal course of airport management, airport and immigration supervisory staff at Lynden Pindling International constantly monitor the flow of inbound customers through the airport with a view to increasing staff whenever necessary to ensure the free flow of individuals in the usage of the facility.

“The travelling public is also reminded that for almost a year now, returning residents have the option of using the new, automated kiosks to traverse the immigration formalities upon returning to The Bahamas. Records show that during the weekend of March 3-5, an adequate complement of immigration officers would have been on duty at Lynden Pindling International Airport during peak hours, with all available immigration booths manned and operational.”