Loretta: Greed Not My Motivation 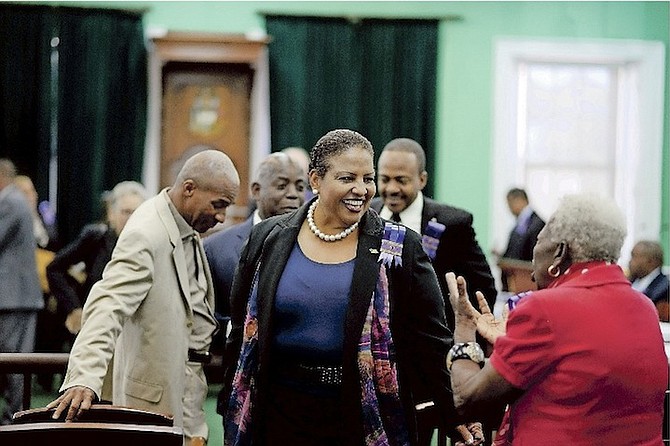 OFFICIAL Opposition Leader Loretta Butler-Turner yesterday responded to speculation over the motive behind her part in ousting Free National Movement Leader Dr Hubert Minnis as opposition leader in the House of Assembly, saying women in this country are always criticised for “wanting more”.

She rejected allegations that her ascension as leader in the House was based on “personal greed” as she pointed to the “invitation” from the six male opposition members of Parliament to lead them. She said they also wanted more, not only for the country, but for Bahamian women.

As she made the comments, which were a part of her remarks in observance of International Women’s Day, seated Progressive Liberal Party MPs laughed and taunted her.

Following the morning session of the House, Mrs Butler-Turner also told the press that Dr Minnis’ revelation on the breakdown of talks over a coalition between the FNM and Democratic National Alliance (DNA) Leader Branville McCartney was an opportunity for the public to read between the lines and decide who was telling the truth and who was just perpetrating a “falsehood”.

On Tuesday night, Dr Minnis said the talks failed because the former Bamboo Town MP wanted 16 seats uncontested and an agreement for his party to have the final say on the makeup of the government, including who would be named prime minister and deputy prime minister.

This follows Mr McCartney’s resignation as leader of opposition business in the Senate last week. Since he left the post, Mrs Butler-Turner said she has not spoken to the DNA leader because “there was no need to” do so.

Mrs Butler-Turner appointed Mr McCartney to the post in December, not long after the “rebel seven” MPs submitted a letter of no confidence in Dr Minnis and voted to have the Long Island MP lead them in the lower chamber.

“I said last year we have not had a lot of significant changes since we (women) got the right to vote and there is so much more that can be achieved,” Mrs Butler-Turner said in the House of Assembly.

“I didn’t realise last year, Mr Speaker, that when I spoke that this year the significance is that a woman would have actually made a move. Not on her own, as the narrative is in the public domain, because there are many that assumed that I am now the leader of the opposition because of personal greed and wanting more.

She also said: “We love to see women ascend, but you know sometimes there seems to be some very powerful forces within our own country that say ‘fine - that’s beautiful to see it happen in another country, just don’t let it happen here in the Bahamas.’

When the House of Assembly broke for the recess, Mrs Butler-Turner was asked for her take on the bad blood between the FNM and DNA.

“Clearly it’s a demonstration that something is wrong,” she said. “I have not come out publicly to say what I felt about the comments attributed to me by Mr McCartney, but I think the public now has an opportunity to read between the lines to see exactly who was telling the truth and who was just perpetrating a falsehood.

“So I guess the FNM and the DNA will have to work out their difference or move beyond it the same way that I have moved beyond it.”

She added that it appeared to be difficult for politicians on differing sides of the divide to work together.

“To be very honest I think it is always difficult for politicians to do, even though we all say that we are fighting for the greater good, when it becomes a position of power or a position of leadership it seems like that seems to be a huge hang up.

“I can’t speak as to what went on with the DNA and the FNM. I am not a part of either of those teams. I just know that in attempting to do my little part I know what happened and obviously you see those other persons who are unable to work through a deal always have something to say. I think that if you are negotiating you keep those things to yourselves and you move forward. If it doesn’t work, you move forward.”

Regarding former Deputy Prime Minister Brent Symonette’s ratification with the FNM on Tuesday night for the St Anne’s constituency, Mrs Butler-Turner seemed indifferent about this, saying the FNM needs all the help it can get.

“At the end of the day, the PLP is not good for the country. Ultimately there is got to be a coming together. That coming together is not going to happen before the election with the opposition forces obviously. But I guess we all need all the help we can get if we are going to get rid of the PLP,” Mrs Butler-Turner said.

The Long Island MP plans to run as an independent candidate in the upcoming election.

I tend to believe her when it comes to Mr. M!

She said nothing in reference with Dr. Minnis other than you would see who was telling the truth when it comes to Branville.

Clearly it’s a demonstration that something is wrong,” she said. “I have not come out publicly to say what I felt about the comments attributed to me by Mr McCartney, but I think the public now has an opportunity to read between the lines to see exactly who was telling the truth and who was just perpetrating a falsehood.

She has a problem with impulse control. She shouldn't be in politics.

Mr. McCartney is on public record for about five times when he is called upon to give account of his poor judgements. . . he keeps saying everybody is lying on him. . .he even denying even having those meetings until he can't deny them anymore. . . this propensity raises a red flag for me. . .I will keep my suspicion of what might be dominant in his public personality or what he is trying to keep under covers. . .the lamb light makes him "slip-up" lil bit here and there! Why is it such a problem to say that he did something dumb or stupid?

I wonder if this man is playing with a full deck. . .or he is just not good at politics and he really does not get it yet. . .keep in mind we were telling LBT that she had "the right stuff" to be the leader for the last five years and when she finally "took" power with yall blessings. . . she floundered like the Hindenburg. . .Mr. Mac was given a "lil" bit of power. . . he went from king kong to cookie monster in a NY minute. . .hmmmmmmmmmmmmmmmm!

I don't know who was telling LBT she had "the right stuff" to be the leader. It certainly wasn't me and, as is evident, it was not the FNM members, as she was soundly defeated in the leadership election, voted on by them. She must have been dreaming to think that her actions in spearheading the vote of no confidence(if she did), would result in any other outcome, other than what has transpired.