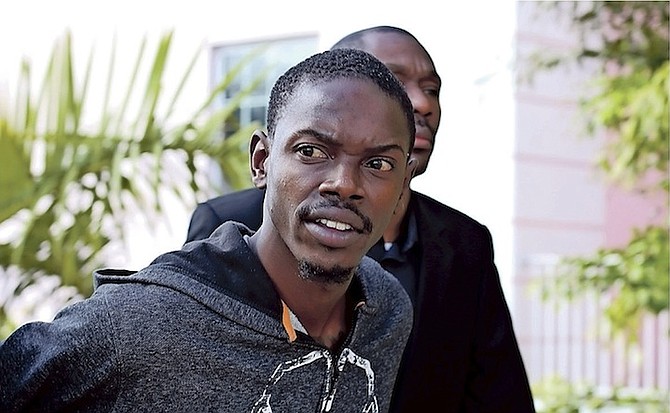 Mark McKenzie being escorted into court, where he was accused of three murder charges and possession of unlicensed firearms. Photos: Terrel W. Carey/Tribune Staff

A MAN wanted by police for questioning in a number of shootings in the capital found himself in Magistrate’s Court yesterday facing three murder charges.

According to police reports, Green was at Derby Road in Yellow Elder Gardens when he was approached and held up by two gunmen who fatally shot him.

McKenzie is then alleged to have intentionally caused the January 9 death of 22-year-old Carlos Adderley, who was shot near a church in the Blue Hill Heights area.

McKenzie is also alleged to be responsible for the December 18, 2016 killing of 22-year-old Maurice Johnson who was shot inside a nightclub on Tonique Williams Darling Highway and died in hospital a short time later.

Due to the nature of the allegations, McKenzie was not required to enter a plea to the murder charges as the three cases are scheduled to be forwarded to the Supreme Court on April 27 through the presentation of voluntary bills of indictments.

However, before McKenzie was remanded to the Department of Correctional Services to await trial on the respective murder charges, a number of firearm-related offences were brought against him.

It is alleged that he, and 25-year-old Andrew Forbes were found, on March 3, in possession of a Glock .40 pistol and 12 lives rounds of .40 ammunition for the weapon without being the holders of a license or certificate to possess the items.

Both men pleaded not guilty to the possession of an unlicensed firearm and ammunition charges and will stand trial on May 2.

McKenzie was then charged with Alexis Johnson, 24, Deandra Williams, 28, and Charlton Thurston, 36 on two counts of possession of an unlicensed firearm with intent to supply and a charge of possession of ammunition.

It is alleged that the quartet were in illegal possession of a black and silver Taurus .40 pistol, a black Revolver and 18 live rounds of ammunition on March 2.

They were also alleged to have been found with 13 ounces of marijuana on the same day.

All four denied the charges against them and are scheduled to stand trial on May 9.

McKenzie has retained David Cash to represent him against the allegations he faces.

Thurston and Forbes retained Nathan Smith and Keith Seymour to defend them while attorney Lennox Coleby appeared for the female accused.

All four were remanded into custody.