Minister Counters Us Advisory Over Risk From Jet Ski Operators 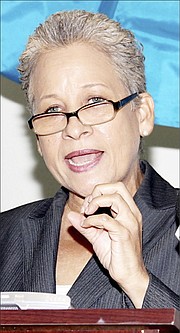 TRANSPORT and Aviation Minister Glenys Hanna Martin yesterday hit back at the most recent US State Department’s advisory against jet ski operators, charging that if left unchecked, it could overshadow the “significant progress” her ministry has made to address the issues within the industry.

Mrs Hanna Martin, in an interview with The Tribune, said while she is “very concerned” about the advisory regarding the local water sports industry, there must be a “focused attention” on the “groundwork” that has been “covered to seek to enhance the environment” for visitors.

She also charged that there is currently a “very strong collaboration” between the Royal Bahamas Police Force (RBPF), the Royal Bahamas Defence Force (RBDF), and the Port Authority in bringing about a “more expansive surveillance” of the areas in which jet ski operators work.

The Englerston MP was responding to a recent warning by the US Overseas Security Advisory Council (OSAC), cautioning US citizens travelling to The Bahamas for spring break to “avoid jet ski operators” because these individuals “continue to commit sexual assaults and other crimes against tourists, including US citizens”.

The advisory has gained traction internationally, having been cited in a Miami New Times article published on Friday.

However, there have been no local or official police reports of late that would coincide with the US State Department’s warning.

“It’s a viewpoint of the American embassy in the Bahamas, so, of course I’m concerned when a viewpoint is expressed in that way and put out internationally,” Mrs Hanna Martin said when contacted on Sunday. “I’m very concerned about that. However though, I have to bring a focused attention in my own country to our efforts that are underway to enhance the industry.”

Mrs Hanna Martin further charged that over the past year and a half or more, significant progress has been made regarding the oversight of the beaches from which Jet ski operators operate, such as increased signage to direct visitors where to go to patronise legitimate jet ski operators and not “random” ones, and “centralised transactions” that are overseen by the Port Authority.

She also said uniforms for jet ski operators have been implemented, and that these operators must go through an “enhanced” vetting process from the Security Intelligence Branch (SIB) of the RBPF before receiving a license to operate.

“Every license holder is subject to vetting by the Security Intelligence Branch of the Royal Bahamas Police Force,” she said. “That’s everyone. You cannot be licensed unless you have clearance through SIB. We’ve gone with we think the highest form of vetting that’s available which is the Security Intelligence Branch of the police. They do vetting throughout The Bahamas in sensitive areas and they also assist us in this industry.”

Mrs Hanna Martin also said water sports operators are “on board” with the government’s attempts to better manage the industry.

“Then you have the port controller and the port enforcement officers which enforce the water sports legislation. You have the (RBPF) which carries out law enforcement in general and the (RBDF) which deals with on the seaside. So the operators are on board. There have been multiple meetings at seeking to arrive at a consensus on what should happen out there.

Last year, 29-year-old Kevin Romer, a jet ski operator, was remanded to prison without bail after being charged with the alleged sexual assault of a 24-year-old woman on Athol Island sometime on Saturday, January 2, 2016.

As a result of that incident, the United States Embassy in Nassau “prohibited” its employees from using Jet Ski rentals in Nassau, saying the industry is “minimally regulated”.

In December 2015, police arrested a jet ski operator in connection with an alleged sexual assault of a female visitor. That incident allegedly took place at Cabbage Beach.

Last January, US Charge d’Affaires Lisa Johnson regretted how, despite persistent complaints from American officials over the past few years, the water-sports industry in The Bahamas has not been properly regulated.

"*Last January, US Charge d’Affaires Lisa Johnson regretted how, despite persistent complaints from American officials over the past few years, the water-sports industry in The Bahamas has not been properly regulated."

Five years of government by neglect, screwup, poop-bomb and PR. The US government, the cruise ships, the offshore banks, the retail banks, the foreign investors, the people of Jubilee and Marathon could really care less about what you're scurrying to do in the last six months.

They continue to tighten the screws on this country's economy despite the government's efforts to comply and make the country safe and enjoyable to its visitors. The incidents of tourists being harassed, molested, robbed or assaulted is it its lowest in at least a decade. Lower than the incidents that happen on South Florida beaches where there were incidents of visitors being shot on the beaches (some were multiple shootings too), and pick pocketing and drug peddling is a common occurrence. The Bahamas needs to ask the state department for proof of these incidences before they publish them giving the country a black eye, and start promoting to other markets that may appreciate our resoucres more. Back in the day the state department would work with the government and say' "Well here's what you need to do, and here's how to do it." But seems they keep raising the bar, raising it to the point where they don't want any Bahamians interacting with tourists.

I agree with the minister. My god at least give us some props for at least making an effort to regulate the jet skis. If after all that you still have incidents of tourists being assaulted - and from all accounts the incidents have diminished substantially- then I can understand your kicking it into high gear with the warnings.

I query if there is an agennda to discredit The Bahamas so that Cuba can be built up as the warning was published in a Miami newspaper. I guess like a proverbial Lazarus we're not even entitled to take the few crumbs that are falling from the rich man's table. How else do the tourist expect to experience Bahamian culture without interacting with Bahamians? Frankly. wirhout Bahamians there is no Bahamas.

It's happening too late. What this government fails to realize is the world is not on their schedule. It's like a child who studies night and day the week before finals. Their parent might say to the teacher, they're really working hard, give them credit, but it's too late. Tourists want the Bahamas in the ads, simple. We write the ads so we know exactly what attracted them. We had long enough to get it right. Our big idea for giving them Bahamian culture was Trinidad carnival. You can't make this stuff up.

On Cuba, late again. This Cuba opening discussion was going on for decades and nothing was done to mitigate against it. It's too late. They're open and this is what competition looks like.