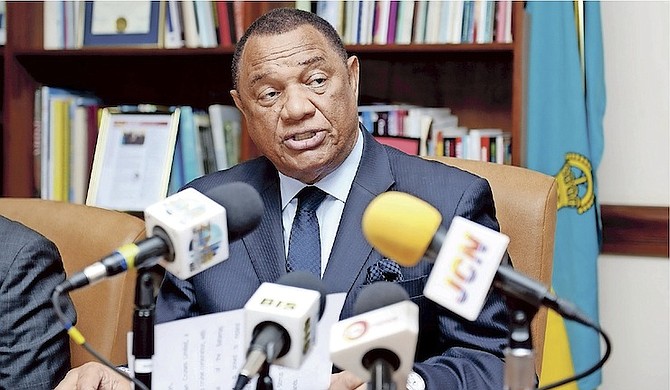 Mr Christie is attempting to have the appellate court review Supreme Court Justice Rhonda Bain’s refusal of his recusal application, in which he argued that she cannot be perceived to be impartial in hearing the judicial review while awaiting an approval of her application to extend her tenure as a Supreme Court judge.

Wayne Munroe, QC, led the arguments set out in a notice of motion for leave to appeal the February 6 ruling of Justice Bain which was filed to the Claughton House, Charlotte Street court last week.

The application and its supporting affidavit, followed within hours of Justice Bain handing down a 17-page judgment explaining her discretion to refuse leave to appeal.

Mr Munroe yesterday argued that the judge knew “when she wrote for an extension, who were the parties in action before her and that the application was outstanding.”

“Knowing all of this, the judge should’ve recuse herself upon receipt of the letter” Mr Munroe said.

“All of the contents of the letter is known to the judge. There’s nothing in the letter that required any factual examination,” he added.

He also said that the judge’s ruling on the recusal application did not dispute the facts concerning her appointment to the Supreme Court in 2009 and that in order for her to receive an extension of her tenure, it would have to go through a person who is party to legal proceedings before her.

“Wasn’t it a fact the application was made when the case was about to start?” Justice Stella Crane-Scott asked.

The QC said the judge treated the issue as one of judicial interference and independence which, he said, was not the issue.

Mr Munroe said the contempt case dealt with by the Court of Appeal concerning Maurice Glinton, QC is a clear example of an instance that refuted the judge’s assertion that she would’ve been unable to complete two part-heard committal proceedings had she acceded to the prime minister’s application.

“Is there an explanation as to why the intended appellant waited seven months to make this application?” Justice Isaacs asked.

Mr Munroe said no, stressing that “this is simply dealing with an application by a litigant. There’s nothing executive in nature of this application.”

Mr Munroe contended that the judge should’ve recused herself from the judicial review proceedings in June 2016 when she wrote a letter seeking an extension of her tenure.

Fred Smith, QC, lead lawyer for interested party Save The Bays said that the grounds articulated by the applicants “have no relative prospect of success.”

He referred the court to a 2015 decision in Governor & Co Bank of Ireland  v O’Donnell which dealt with a similar issue.

“This court is being asked to review a decision made by the learned judge and whether she should recuse herself applying the principles that are not controversial or disputed between the parties through a simple, discreet set of facts that were before her,” Mr Smith said.

He stressed to the court that “in none of the grounds of appeal was any reference to great public interest or constitutional importance.”

The matter continues today in the appellate court before Justices Isaacs, Crane-Scott and Roy Jones.

The prime minister’s application seeking leave to contest the February 6 decision was made on six “draft grounds of appeal.”

It was argued that the judge was wrong in law and in fact to not recuse herself after receiving a letter from Mr Christie’s counsel concerning the facts and law where the requisite test for recusal was made out.

It was also proposed that the judge was wrong to come to the conclusion that a recusal was not warranted in the circumstances.

The judge was also alleged to have been wrong in determining that she could not continue hearing the aforementioned “part heard” committal proceedings if she had recused herself.

It was also proposed that the judge misdirected herself on the law and failed to properly access the application.

It was lastly proposed that notwithstanding the prime minister’s delay in making the recusal application, the judge had a responsibility to do so of her own volition.

Justice Bain, in her ruling last Wednesday, said that the first five draft grounds did not specify any erring or misdirection in law or fact concerning her ruling rendered on February 6.

On the sixth argument, Justice Bain said “there is no realistic prospect of the intended appellant in succeeding on this ground.”

Justice Bain further reasons that the “court has to consider the particulars of each case before making a determination whether to grant leave to appeal.”

She noted that this case was different from that of Melidor “which dealt with the discovery of documents from government ministries and departments, a matter that had not been pronounced on by the court of appeal.”

“The question of recusal of a judge is not a novel application and has been raised before in matters before the Court of Appeal. Additionally, the matter of public interest has not been raised by the intended appellant as a ground of appeal.”

“As the court has refused leave to appeal, the application for stay of proceedings will fall away” the judge added, before awarding costs against the first respondent - the prime minister - for the unsuccessful application.

Attorneys for the prime minister had filed a motion in the Supreme Court on January 26 asking that Justice Bain recuse herself from the judicial review - or any other cases in which he is a party - on the basis that she is set to attain the legal age for retirement in April.

She has an application for extension that would have to be authorised by the governor general on the advice of the prime minister in consultation with the leader of the Official Opposition.

The motion of recusal was filed by Mr Christie’s lawyers in his capacity as minister responsible for Crown land and was argued on January 30.