Christie: Claims Of Taxpayers’ Money Being Used For Campaign Are ‘Fake News’ 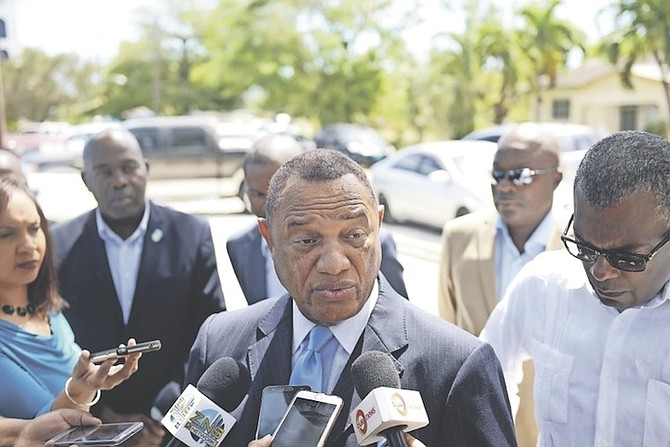 CLAIMS by the Free National Movement that the government is using “tax payer money” to fund its 2017 electoral campaign was yesterday blasted as “fake news” by both Prime Minister Perry Christie and Deputy Prime Minister Philip ‘Brave’ Davis.

The two, addressing the press on the sidelines of a walk-through of new Fox Hill community centre, took FNM Chairman Sidney Collie to task for what they labelled “ignorance” and “deliberation distortion of fact” by the opposition for political gain.

Mr Collie in a statement on Friday suggested that the PLP government has raided taxpayer funds since taking office in 2012.

He insisted that the only thing the Christie administration has done is short-changed the Bahamian people at every turn.

Mr Collie also accused the government of handing out “lavish contracts” to their “friends and donors”.

Mr Christie, referring to portions of a statement issued by PLP Chairman Bradley Roberts on Sunday, warned Mr Collie that while his words are directed to the PLP as a political organisation, all responses on the matter would come from the government, which he said must defend its actions.

“The government of The Bahamas was elected by the people who we would wish to protect when it comes to our revenue. But part of the protection is not allowing lies to be institutionalized through fake and false information.

Added Mr Christie: “Let him hear me say that. He should know personally the maturity of my government.”

For his part, Mr Davis said Mr Collie’s claims should be viewed as nothing more than nonsense from a party that could not “discern between what is government and what is politics”.

He said: “Again, this demonstrates the level of either ignorance on that side and or deliberate distortion of fact, to be able to promote their own political (agenda).”

Mr Davis said he remains hopeful that the country could one day develop to a degree where campaign finance laws could be enacted, bring an end to these sorts of arguments.

Mr Davis said: “Those calls have been and I think it is something that we ought to be addressing, but unfortunately no one has gotten around to it.”

“This is something that has been talked about from time immemorial and we always seem to put it on the side and it is always heightened at this time of the year depending on who is in government.

“When we were in opposition we called for it. It is always the cry for the opposition,” Mr Davis said. “It is a debate that will continue until we deal with it.”

Months after being elected to office in May of 2012, Prime Minister Christie committed his government to campaign finance reform talks.

However, despite this indication, there has been no progress toward any such talks or legislation.

A mature government? That put's his mature middle finger up to say fook you to the Bahamian people. Christ, can it get any worse?

I believe nothing the PLP says...show us the receipt for the ads then I will believe you. Other than that I don't want to hear it.

This is very disheartening. It is sad to see Bahamian politicians so willing to channel American political discourse. Even worse is that said discourse was inspired by one who is likely become the least liked American president in two generations.

Sorry for the repost (below), but I think it's very important!

It's almost over. The PLP has almost completed their master plan of not only enriching themselves tremendously but at the same time, make everyone else dirt poor. It is the very same formula that their brothers in Africa use to 'big themselves up' and to gain absolute power. Their next move is to give more and more power to the military (defense force) in policing services (done). Get the military more weaponry (thank you China). They will soon use the military to quash protestors (be careful at your next march We March). Once they show the power that they have then they will change the rules (for stability) and never let go of the power. Once the foreign banks are gone they will have total and utter control over our finances as well. We will soon be a communist state where EVERYONE will be looking to government for a job. PLP is the Path To Communism!!!!

Comrade Rt.Honourable Prime Minister, I am here to report directly from the street corners across our nation of many islands that you and colleagues seeking another term as government have good reason to be 2017 General Election alarmed - when even among your own supporters, there's much conflict when your own State Minister Finance, seemed confused over where your government spent the value-added tax which is likely to add up to hundreds of millions of dollars?
PM, not only was your State Minister Finance, under great confusion over his explanation at the PLP's convention, but he created a dark cloud when he loudly proclaimed how millions VAT monies were spent securing new aircraft for Bahamasair - when your government in fact had borrowed $150 million to secure the purchase new aircraft?
PM, how is it possible a Minister Of State Finance, would not have known about the loan for $150 million?
PM, is it just the PLP government's message that is confusing, or is there more the PLP Cabinet wishes to hide from the public?
PM, to help you out I need point out that although I am not one of them - there are some already forecasting that the coming 2017 General is shaping up to be a repeat of the 1967 General Election's (PLP/UBP) results?

What? He thinks he's the new Trump or something? First the finger, then cries of fake news?

It's fake news!" Is this going to be the PLP's response now to every challenge put to them?

I will tell you what is fake - Perry Christie and his entire government!