Two Years On And Still No New Defence Commodore 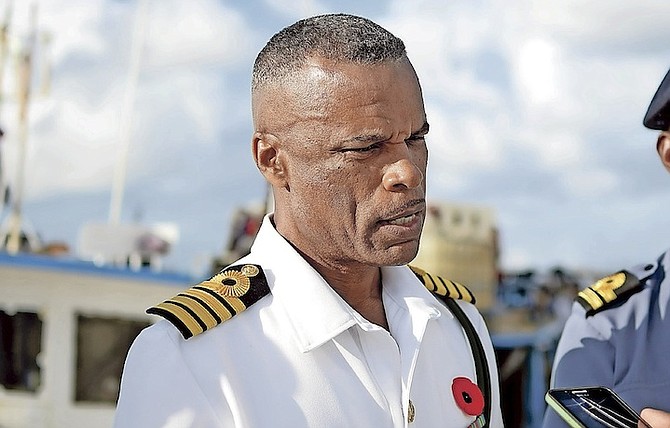 He did not give a more precise timeline.

This is not the first time a government official has said an announcement on Mr Bowe’s successor is forthcoming. In March 2015, State Minister for National Security Keith Bell said the new commodore would be named on May 1 of that year.

Government officials have not said why there has been such a long delay in officially naming someone to the substantive position.

In the interim, Captain Tellis Bethel has served as acting commander of the RBDF.

The delay has caused the government to be accused in some circles of playing “politics” with the position.

The Tribune understands that the former commodore, Mr Bowe, remained the holder of the substantive post for months after his contract expired because he had taken a year of pre-retirement leave from the force.

He told officials in 2012 that he would not seek to have his contract renewed, which expired in January 2015.

Darren Henfield, a former defence force officer who is the Free National Movement’s (FNM) candidate for North Abaco, told The Tribune this week that the government’s failure to officially name someone as commodore “demoralises the force.”

“I think the government is doing the force a disservice by failing to name a commander for so long,” he said on Tuesday.

“It demoralises the force and the officers that try to lead it and the young men and women that make up the organisation. It’s been left too long in ambivalence, this discussion of leadership in the force. Because of that, it’s likely people are assuming lines that they would follow, thinking my side is going to get it verses another side. That’s not a good thing to have in a military organisation.”

Mr Henfield also said: “Someone should be named to head it and should be allowed to put in place succession planning so we don’t have this problem again. The climate in the force is one that is by nature adversarial. If you work hard, you hope to be recognised for your service and ability. After a while someone should be recognised as reaching the top. They deserve it. They have the finest training the world offers to officers and we have multiple officers capable of leading the organisation.”

In response to such criticism, Dr Nottage said yesterday: “I don’t think we have an unstable position on the defence force as a result of the lack of appointment of a commodore. But that matter is under consideration and an announcement will be dealt with shortly.”

In the absence of a commander, the acting commodore of the RBDF is empowered by law to perform the responsibilities of the substantive holder of that position.

Captain Russell if he is doing the job, he Should be given the title. That is my view and I am sticking with it.

They are trying to find someone who can handle those big new expensive boats. So far I think they have all been run aground at least once. I think we have the fastest growing reefs and sand bars in the entire world - Garmin maps can't keep up.