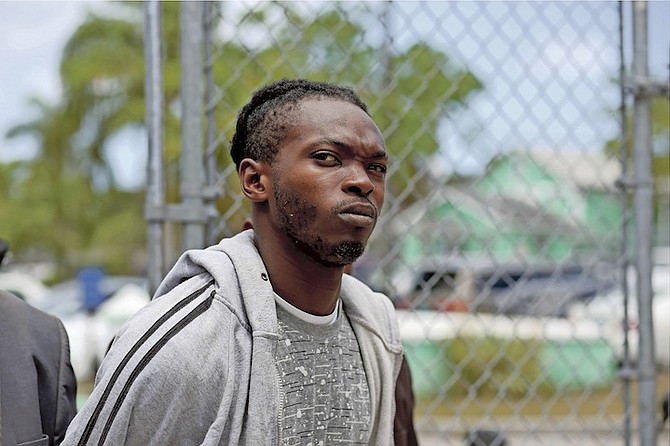 Wilson Capris, 26, who was accused of murder and attempted murder.

A FOURTH suspect appeared in Magistrate’s Court yesterday accused of having a role in a recent fatal shooting in an inner-city community.

Concerning the murder charge, it is alleged that Capita, being concerned with others, intentionally caused the death of Patrick Axanthio Thompson.

He is also alleged to have attempted to cause the death of Terrance Rigby and PC 3825 Hall and is accused of being in possession of a black .45 XD-45ACP pistol and a HK submachine pistol.

According to initial reports from police, shortly after 4pm, a group of men were standing in front of a car wash on Market Street, near Palm Tree Avenue, when the occupants of a dark coloured vehicle pulled up and fired several shots at them before speeding off.

Thompson was hit and died of his injuries at the scene while Rigby was taken to hospital for treatment.

Police said officers chased the suspects into the Ridgeland Park area, where the three men allegedly fled on foot from the getaway vehicle. Police said they eventually caught the alleged assailants near a bushy area. Police also allegedly discovered a tech 9 automatic firearm and a .45 pistol.

Like his co-accused Christavio Tucker, 22, Kelvin Clarke, 23, and Kevin Ramsey, 24, who were arraigned on April 26 on the same charges, Capita was told yesterday that the case will be fast-tracked to the Supreme Court through the presentation of a voluntary bill of indictment at their next Magistrate’s Court appearance scheduled for May 31.

Due to the nature of the allegations, he was remanded to the Department of Correctional Services to await trial. However he has the right to make an application for bail in the Supreme Court.

In another arraignment, 50-year-old Edwidge John was arraigned on multiple counts of attempted murder and three firearm related offences stemming from a shoot-out with police that occurred on April 25.

John was told that his case will be fast-tracked to the Supreme Court through the presentation of a voluntary bill of indictment at his next Magistrate’s Court appearance scheduled for May 29.

Due to the nature of the charges, he was remanded to prison to await trial. However he can make an application for bail in the Supreme Court.