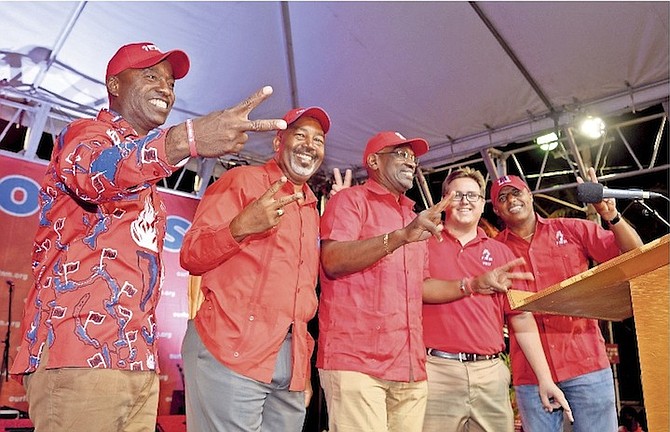 Which political party do you think has had the strongest message so far in the general election campaign?

FREE National Movement Leader Dr Hubert Minnis yesterday called the Heads of Agreement (HOA) between the Christie administration and the buyer of Baha Mar “nothing more than a multi-billion dollar theft of the Bahamian people’s sovereign rights.”

In a statement, Dr Minnis said the “sweetheart deal” is not good for the Bahamian people and he understands why Prime Minister Perry Christie fought so hard to “shroud this deal in secrecy.”

According to the HOA that was released to the media on Sunday night, the government has committed to contribute $4m a year for eight years for marketing of Baha Mar upon the opening of the resort’s casino.

The document, signed on April 25, outlines a number of concessions granted to the new buyer of the beleaguered resort, including value added tax (VAT) exemption until the end of 2019 and write off of $10m in casino debt.

And while stressing that there must at all times be “continued efforts” to maximise Bahamian employment at the resort, the government has allowed for the granting of up to 300 work permits for non-Bahamian workers in senior management positions, those with technical or specialty skills including brand management, “where there is a demonstrable need and lack of qualified Bahamian applicants.”

The HOA notes that after the first 18 months of operation of the resort and casino, work permit numbers are projected to drop to 200.

The resort will also be exempt from the payment of real property tax for 10 years “commencing on the date of opening for business of each facility within the project.”

In his statement, Dr Minnis said the government’s “irresponsible transaction” and “scandalous” efforts surrounding Baha Mar are an affront to the hard-working families that struggle to make ends meet. He said the HOA contains “disastrous provisions that will impact our country for years to come.”

“Now the truth comes out,” his statement noted. “And it is not good for the Bahamian people. The public disclosure of the PLP’s secret Baha Mar (deal) is breathtaking in its brazen theft of our country’s assets.

“The astounding revelations from this disclosure leaves no doubt in anyone’s mind as to why our embattled Prime Minister Perry Christie and Attorney General (Allyson Maynard-Gibson) fought so hard to shroud this deal in secrecy – even going to the courts to seal the contents from public view.”

The timing of the release of the HOA coincides with the end of the government’s self-imposed deadline to push for the release of the sealed Supreme Court documents relating to the sale of the resort to Chow Tai Fook Enterprises (CTFE). However those documents remain under the court ordered seal and as a result, the sales price and other conditions involved in the process are still unknown.

“The conception and timing, along with their fake, ‘soft’ opening, which only included unpaid guests of the PLP party, of this scandalous scheme has been shown for what it is – a costly campaign driven effort to prop up the election hopes of a corrupt regime that the public has grown tired of.

“But they have failed. Unfortunately, it will be the Bahamian people who will shoulder the burden and pay the price for Perry Christie’s ill-advised and ill-conceived give away to his Chinese cronies.”

Dr Minnis said the information in the document justifies the FNM’s concerns regarding the government and “their Chinese cronies.”

“Further it is well known that we have stood side-by-side with the people stating our ever-growing concerns regarding the government’s actions on Baha Mar with their Chinese cronies. Sadly, we now know those concerns were justified. The newly public documents reveal hundreds of millions in waived VAT taxes,” Dr Minnis said.

“Imagine how many Bahamian families will struggle while the PLP’s allies are excluded from paying the VAT tax, enriching themselves at our expense? This sweetheart deal our embattled prime minister signed off on and then hid from the public has so many disastrous provisions that will impact our country for years to come.”

They seem deliriously happy at their prospects of drinking from that bountiful trough known as the public purse, which they would immediately refill with taxes and borrowings on a scale never seen before. We can only hope and pray Minnis, Symonette and D'Aguilar don't get their seats, even in sacrificed safe seat elections after the general election.

Just because you een gittin' business doesn't mean that you and your doppelgangers need to spew unfounded comments.

Poor Mudda. So consumed with hostility.