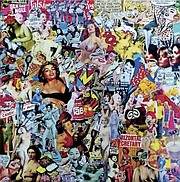 Artist Sue Katz explores the emotional baggage women carry around with them throughout their lives in her current show ‘Exposed’.

We have witnessed yet another act of awful violence against women captured on camera and then posted to social media without so much as a thought for what this says about the society we live in.

In many ways, the fact that people are emboldened to post violent images online and to share with thousands or millions of viewers – because we know that the images do not stop at the borders of the country, but spread out to all parts of the world in no time at all – represents society. This is one of the realities of social media. It tells us that we are in part related to the problem.

As a group, society has demonstrated its acceptance and perpetuation of violence against women or gender-based violence. We consume the videos, photos and recordings shared on social media.

The way society speaks about women alone shows how entrenched attitudes towards gender inequality are and how pervasive it is to feel that anyone would appreciate a little joke, as one shared in the House of Assembly ‘among peers’ at the expense of women.

Indeed, the sharing of little jokes and big videos is practically the same thing, as they both send the same message: we have no problem in condoning violence against women.

The sharing of a video taken by attackers of them sexually assaulting a woman speaks directly to this reality. Again, we argue that we can stand up in public and say anything. Leaders can behave however they wish and there shall be no repercussions from their behaviour. They can invoke violent behaviour in their followers through the words or the images they use to empower themselves. It is ironic and sad that a group of people who see themselves as the visionaries of a country must speak violence to disempower their adversaries. This is a form of cultural violence that has been normalised.

When studies can demonstrate that school children share the same attitudes as their parents with regard to women and how women should be treated, and that violence should be used, especially if they come from a home where an occasional bit of violence is used to keep the women in line, indicates that this is a serious problem. It is a social problem, not just an individual problem.

This disturbing video, like all the other distressing acts of senseless violence occurring in our communities, begins somewhere else. These acts are not simply about violence. but are symptoms of a wider problem. One problem are the massive inequalities inculcated in the culture of the country. However, the Bahamas is not alone in such inequalities. Many of the inequalities and attitudes evident today were inherited from the former powers who ruled the Commonwealth. Beyond that, we see the serious lack of appreciation for women’s worth. As much as we have national discourse about empowering women, politics always come first and women always seem to be less important than others or the butt of off-colour jokes.

These are the same kinds of jokes that focus on Blacks, Hispanics, Jewish people and Asians, but when we are in the presence of the jokester, the rejoinder is usually, ‘You’re different’. Sadly, all women count in the group of women, no matter if one is feminist, not feminist, young, old, black, white – all women suffer from violence against women and gender-based violence, even if it is not directly.

The video exposes expansive attitudes to women and their inequality, lack of worth, weakness, but it does so at a time when almost anything goes in the country. Leaders have opened the gates to verbal abuse of all people. Their abuse translates into more serious acts further down the road.

Interestingly, an exhibition has recently opened at Hillside House that exposes attitudes to women, and shows how even though women have gained ground towards more equal treatment, society continues to treat them differently.

A patriarchal, misogynist society encourages exploitation and disempowerment through attitudes towards women that disempower them and keep them hostage to not being good enough, not being skinny enough, not being pretty enough. Ironically, again, all of these superlatives are created by a ‘media’ out there that really does not value women, except for what it can make from them.

Sue Katz Lightbourn’s show ‘Exposed’ is very revelatory of the attitudes that keep women subjugated even with the message that feminism has removed all boundaries to women’s success and equality.

Meanwhile, women remain sexual objects whose body image depends on an ideal that really does not exist, and neither is it healthy for most women. This is a type of violence that is inflicted on women through constant media images of what they must look like.

Katz’s work is incredibly engaging as it is a combination of collage and assemblage, which means that there is a great deal of information. Some of the images are fun, others are darker, but all reveal messages of alterity and subtle control levied on women’s ability to be and their agency. The show opened on April 13 to a packed house. The images vary from the from iconic Wonder Woman to other paraphernalia of ‘beauty’ and desirability that are brought together to create a powerfully thought provoking and enjoyable experience.

Katz’s work connects with the idea circulated through media that women belong to men and are always subject to male desire. There are far more messages than that, but the reality of social control levied against women, as it does not make them powerful, rather renders them subject to the whims of media and a male gaze. One of the serious messages, aside from ‘Pink Survivor’ is the violence deployed against women.

Apparently, according to many especially in the Bahamas, women are a threat to male success. In reality though, successful women encourage more successful men. Women do not threaten masculinity, unless and until that masculinity is under threat or challenged by social powers cloaked in goodness. Ironically, as far as women have come in the country, we have determined that they have gotten far enough and the empowerment of one speaks to the empowerment of all. This is another fallacy. Having one female representative is not the same as empowering women.

Violence is circulated daily as we encourage young men to dominate women. So many of the messages packaged by and delivered through media as Katz’s work shows are steeped in anti-feminist, subordinating control that say that wearing high heels is liberating, to be sexy, much like Beyoncé is liberating, yet the performance Rihanna encourages is about being content with patriarchal control and living with violence: ‘I love the way you lie’, and I will let you beat me.

When these images circulate of masculinity that is empowered through violence against and domination of women, what else do we expect to occur? When young men are apparently empowered by murdering and through the use of violence to exact their desires, what other result do we expect?

Much of popular culture boasts of the masculinity of men having their hoes and bitches who depend on them for their self-realisation. Few are the popular images of young men determining their destiny without bling and hoes and bitches.

Yet we argue that women have arrived at full equality, but as a society, we refuse to allow them to pass on their citizenship to their children or their husbands, in particular instances. We tell people that women need to be beaten, to be controlled and to be sexually assaulted through daily messages in text, music, popular film, advertising and leadership lectures that tell you that in order to be a man you must not let a woman dominate you.

Do not let a woman earn more than you, at the same time, we render men ‘unmanly’ when they are educated. How does that work? An uneducated man cannot earn the same legally as an educated woman, who will still be paid less than her peer, but that man understands from our culture that he is entitled to earn more. If she earns more, he is weak.

The culture that consumes this also consumes the images sent out of violent assaults against women. The message is obvious: there is a serious social problem that is not crime but that sends out an APB with violent crime that says something is wrong.

We understand that something is wrong, but as long as leaders benefit from the status quo, such as images of sexual control and exploitation of women sent over social media, these consolidate an image of subjugation and sick empowerment through subjugation, nothing will change. At the same time, we continue to blame the victims of rape, to blame mothers and daughters for being too sexy, yet every message deployed is that women must be sexy and sexualised to succeed.

If a woman is sexy and sexualised she has won the prize. However, we do not help to protect her from the very people we encourage to devour and destroy her because to be sexually attractive is to be exploited somehow.

To be sexualised is to be a cutter, a hoe, a bitch and to be deeply dehumanised. And then we wonder why sexual violence and anti-female sentiment in this country is one of the highest in the region. The leaders who feign outrage over these acts, the same men who encourage women to be subordinated to men and then tell men they must rule and if she doesn’t listen, show her who is boss, are as responsible for the violence, inequality and exploitation as those actually performing the acts.

The society that tells men it is empowering to disempower women is as guilty as the actual assailant. We create the potential situation and sit back and watch it unfold then wonder why the youth are so violent.

Have we stopped to check our behaviour, our words? Violence against women is as varied and as pervasive as anti-Haitian sentiment. It is all wrong and all speaks to inequality.

Social media is dangerous, but it is no more dangerous than a child being taught how to beat women (hate Haitians, and hate gays), and that a woman must obey a man and be his plaything. We simply use different language to sell this belief.