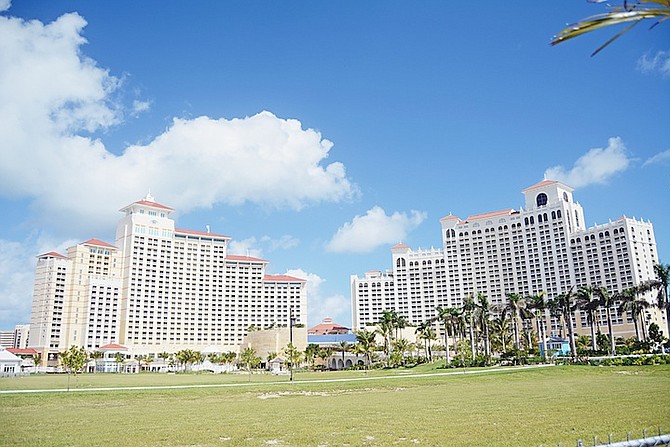 FORMER Court of Appeal judge Neville Adderley has disagreed with former Chief Justice Dame Joan Sawyer’s recent critique of the Supreme Court-sealed deal to open Baha Mar, further charging that only a “perverse mind” would interpret the court’s sealing of the documents as an attempt to protect a “secret deal” by the government.

Retired Justice Adderley, in a statement on Wednesday, also cautioned “responsible members of the public” not to appear to “bring the reputation of the courts into disrepute thereby eroding the rule of law when it serves their own purpose.”

He also said those individuals will rely on those “same courts” to “protect their criminal and civil rights when the occasion arises.”

His statement was in response to comments made by Dame Joan in March, when she suggested that there are no legal grounds on which the Baha Mar deal announced by Prime Minister Perry Christie last August should have been sealed.

At the time, Dame Joan wrote that there is “confusion” as to how the judgment in a publicly heard civil case could be “sealed” so that no one, outside the judge who heard the case, Attorney General Allyson Maynard-Gibson and lawyers for the parties involved, would know the contents.

Dame Joan said there was no matter of defence, public safety or public order in effect to cause the decision not to be made public.

At the time, Dame Joan also indicated that certain comments Mr Christie made on the matter in January raise questions about whether he or Mrs Maynard-Gibson are controlling the courts.

In response, however, the retired judge, who said he read the judgment by Justice Ian Winder, refuted Dame Joan’s assertions, further charging that from his perspective, the judgment is “sound and based on legal principle”. Retired Justice Adderley explained that Justice Winder, in making his decision to seal the documents related to the sale, “turned his mind to the principle of ‘open justice,’” which Justice Adderley said “is always at issue in an application to seal documents”.

He said Justice Winder “also directed his mind to other considerations including that it was a private commercial transaction” which he said “necessarily includes having regard to the constitutional right of the applicant to privacy and the competing public interest in open justice”.

Ultimately, Justice Adderley said Justice Winder “exercised his discretion to seal the documents - an action which the judge pointed out is not unusual in private, commercial transactions like Baha Mar.

“With such clear reasons given by the court for sealing the documents, ‘to preserve the integrity of the sales process which remains a commercially live issue,’ it is difficult to see how any honest and objective person can say that the court sealed the documents to conceal a ‘secret deal’ by the government,” he said.

“In light of the clear reason given and discussion by the court, it must be a perverse mind indeed to interpret the judgment as the court’s sealing the documents to protect a ‘secret deal’ by the government, who didn’t even make the application.”

Apart from failing to reveal the cost at which the shuttered resort was sold, Mr Christie at the time spoke minimally of the details surrounding the deal, adding that it had been sealed by the Supreme Court at the request of the Export-Import Bank of China (CEXIM).

“It is true that the sealing of judgments can be a breach of the Constitution (Article 20(9)), because the Constitution requires what is called ‘open justice’, that is, that court proceedings and judgments should be in public,” Justice Adderley continued. “But this is not what happened in this Baha Mar case - no judgment was ever sealed.

“I can only assume that if, in fact, Dame Joan made that statement it was an innocent mistake on her part.

“Because Dame Joan knows very well that there are often commercial and other reasons for judges to allow documents, other than the judgment, to be sealed. It happens on numerous occasions and in a variety of cases. And this is precisely what happened here.”

Justice Adderley also said he is “deeply troubled” by the “rampant reckless attempts to misconstrue the facts in an attempt to manipulate public opinion,” which he said is “not only damaging to our national discourse, but hurtful to the rule of law and our country’s reputation.”

He added: “Responsible members of the public should be careful not to appear to bring the reputation of the courts into disrepute thereby eroding the rule of law when it serves their own purpose, because they are the same courts on which they must rely to protect their criminal and civil rights when the occasion arises.

“If persons or entities, including the press, genuinely felt they had the standing and the legal arguments to have the documents unsealed, and wanted to have them unsealed, they ought to have made an application to the court. I have not heard of any such application. But I have heard far too many irresponsible accusations and seen careless news headlines.

“It is regrettable that trading short-term political gains for public mistrust seems to be the actual wrongdoing in this whole affair.”

An application by advocacy group Transparency in Politics was filed on Wednesday to have the documents unsealed.

Justice Winder greatly erred in the discretion he exercised to have the Baha Mar documents sealed given their obvious significance to the Bahamian public at large. A proper judicial review would prove Winder did the wrong thing (for what reason the public is left to speculate) and Dame Joan knows this to be the case. Adderley is just singing for his supper in the event the PLP pulls off a victory in the impending general election.

The Dame is singing for her supper. She makes comments on matters she has not read. It is my prayer she did not do this while she served as a Judge.

Comrades! Few among the sane and reasonable common people looking in at the going on's of Baha Mar - during Izmirlian's reign and after, would think that the people before and now connected with Baha Mar, have turned their minds any where close to the principles of "open 'transparency' justice."

I would like to know when the 200+ expat former employees of Baha Mar will be paid owed salary and severance. Bahamians were paid, but not foreign workers? Why was this apparent discrimination permitted? Why aren't Bahamian labor laws enforced? Are contracts only valid if you're Bahamian?

How come it's a "private, commercial transaction" when it comes to keeping the deal sealed? But the government was all up in this saying how they working on behalf of the Bahamian people. So OUR part of the deal should be open then.

The Bahamian - Chinese government conspiracy on Bahamar will soon be exposed ....... Judges should not be PLP or FNM despite being appointed by PMs with no vetting (like in the USA) ........... Some actions by Winder & Adderley have left Bahamians scratching their heads