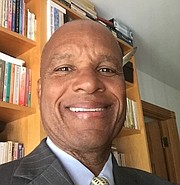 ENVIRONMENTAL activist Shuffel Hepburn says the residents affected by industrial pollution in the five southern settlements of Grand Bahama will deal with the Progressive Liberal Party (PLP) government at the polls on May 10.

“The PLP government has done great damage to our relocation efforts and the Prime Minister has told residents point blank that there will be no relocation. Residents have taken note of his lack of care and concern and will speak to he and Dr Darville at the polls on May 10,” he said.

The Pinder’s Point Lewis Yard Environmental Committee has been agitating for many years for the relocation of residents living near the industrial plants. The group held several protests and town meetings this year.

In March, Prime Minister Perry Christie said that relocating the residents of Pinder’s Point is not something that his government will consider as no such recommendation has been made to it.

“The assessments to date have all indicated that people were not in harm’s way,” Mr Christie told reporters in Grand Bahama. “(A) recommendation would have to come for relocation. Clearly, when you begin to make an assessment where people are in harm’s way the implication is that you may have to relocate them.

"But if the results say there is no need for that because the incidences of diseases … are not related to the presence of the industrial concern, then we have to take it in consideration.”

Mr Christie noted that the government is concerned about industrial pollution and has brought in the best scientists it can find to conduct studies.

The PAHO/WHO study found that there were no health risks to residents living near the industrial plants, and recommended air monitoring and that a safety risk assessment be conducted in the affected communities.

Minister for Grand Bahama Dr Michael Darville said that government has installed E-noses in the affected communities and has contracted Antea Group, of the Netherlands, to conduct a safety assessment of the communities near the industrial plants.

Mr Hepburn said that government’s relocation of the Lewis Yard Primary School proves that there is a health risk to residents living in surrounding communities near the plants.

He noted that the PLP government started its present term by relocating Lewis Yard Primary from Lewis Yard to the St Vincent de Paul school campus in Hunters.

Mr Hepburn claims that the Hunters settlement is still in the pollution zone.

Last October, the students were relocated from the St Vincent campus because of hurricane damage to the Church of the Good Shepherd Community Hall.

Mr Hepburn stressed that students were again “in the very thick of the pollution and sandblasting sprays.”.

“Ironically, this government ends its term by moving the same school back to the same location. The government has been going in circles when it comes to the residents around the industrial plants and has no idea, nor the will about how to resolve the issues,” he said.

The school has since returned to the St Vincent campus, but Mr Hepburn believes that the relocation of Lewis Yard Primary two years ago, and three other schools in 1988-9 (Grand Bahama Catholic High and Hawksbill Senior and Primary Schools) prove that there is a health risk to the residents in the surrounding areas.

“The residents, however, continue to suffer, and the students who attend Lewis Yard Primary return to their homes in the affected communities of Pinder’s Point, Lewis Yard and Hawksbill.

“They spend more time back in the heaviest pollution at their homes than they spend in their school. So how is that a solution?” said Mr Hepburn.

The association, headed by president Berthram Pinder, is developing a website called GBVoice to expand its reach to others in Grand Bahama and the Bahamas.

According to Mr Hepburn, GBEA will endeavour to carry out its own environmental study in the affected areas to prove that there is evidence of industrial pollution.

“We will focus on working hard to cause the relocation of the residents,” he vowed.

Mr. Hepburn has always been a man concerned not only about business, but the well being of the customers for not only his - but other businesses where the vendor might not be so particular and the purchaser/buyer not aware.This also translates into the supplier - government, and the receiver - the public which pays the government for their supposed and expected honest oversight. At this time with the PLP I can only say that Mr. Hepburn's view is good, however the PLP's extraordinary departure from honesty and transparency is in my view a reason for war should their rotting culture continue.

how long has BORCO been at the same site in Grand Bahama what has happened that the situation has now become an emergency and the PLP is the blame? If BORCO so bad. Perhaps the plant should be closed. because it is also bad for the employees. If Hepburne votes for the FNM or DNA maybe they will close BORCO down.

Yes Mr: Hepburn" roc with doc" can sell Baha Mar, close down Borco and that cruise port in East End Stop that,

Birdie, you only make noise when you know something/someone is right, which frightens you as the truth always hurts and frightens insecure, brainwashed folks like you.You so desperately want it/them to be wrong you continue to try and defend the indefensible and prop up these teifin people. PLP zombies like you see nothing wrong with poisoning other people with oily water and dump fumes or destroying our environment, or stashing dirty money in closets and foreign bank accounts, erryting cool long as you is PLP, ain no law fa yinna. I hope you got a good supply of sack cloth and ashes ready, you ga need them come Thursday morning.

No one's recommended it??? Why do i feel compelled to swear like kalikifookdaplpdink???!!!

I did say if BORCO is so bad. then close it down. Borco has been in Grand Bahama for a long time it is not a new company what has gone wrong lately that has made it so bad?, I am not saying that it is bad or good I do not know.

Then shut your pie hole

Birdie,does this mean that you don't have an opinion on Fitzgerald's handling of Rubis and begging Sarkis, or Shane's foreign Nygaard account, I still waiting for him to tell us the names of the children he gave all these scholarships too and which schools they are attending, excluding of course the University of Wulff Road which still graduating 'E' average students.