Gay Man Is Beaten Up During Carnival 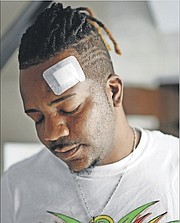 AN American man who was allegedly attacked by a group of persons during a concert at Bahamas Junkanoo Carnival early Saturday morning is alleging that he was “targeted and beat up” because he is gay.

In an interview with The Tribune minutes after leaving Doctors Hospital where he was treated for a laceration to his head, 24-year-old Adrian Brown, who was born in Jamaica but lives in the United States, said he wants the persons who were involved in the fight to be charged with a hate crime. He said he will be pursuing the case when he returns to the US today and he also plans on suing for medical bills and pain and suffering.

Mr Brown, a Navy officer who came to the Bahamas to participate in Junkanoo Carnival, said he was dancing at the concert late Friday into early Saturday when he felt someone throw water on him.

“So I was at the concert and there was a stoop and I stepped up on the stoop and I was dancing,” Mr Brown told The Tribune “This was about 3am in the morning. So I am dancing and having a good time. I had on a cut out shirt and fitted pants and I felt when some water hit me. So I looked back and I got up off the stoop and I said to the guy, ‘Why did you hit me with the water,” and he said ‘Because you a batty man,’” Mr Brown claimed.

“Batty man” is Jamaican slang for a homophobic slur.

“Now I don’t think he knew that I am originally from Jamaica,” Mr Brown continued. “So before anything could happen his girlfriend came up in my face and slapped me and then four people just jumped me,” he claimed. “Two girls and two guys. Then two Bahamian men jumped in and started helping me. There was no conversation, they just started fighting me. I am not a fighter, I came here to the Bahamas to have fun, party and go back home. I don’t know these people from Adam and they do not know me and they were hitting me and beating me in my head with a rock. He just said ‘you are a batty man’ and they all jumped me. After the incident the other two guys that helped me held one of the guys until the police came.”

Mr Brown said he went to the police station and was taken to Princess Margaret Hospital a short time later but because of the long wait he went to Doctors Hospital where he was treated and discharged.

Despite the ordeal, he said he would come back to the Bahamas and will not let this one incident change his opinion of Bahamians.

“I think they assumed because the way I was dressed that I was gay and I am gay, but I don’t know anyone here so they would not have known that. This was a hate crime. The police were very good, I went to the police station and they called the ambulance for me. I was still able to participate in carnival. I went on the truck but I couldn’t do what I wanted, I wanted to be on the road but I was hurt and slept most of the time.”

This could not be confirmed up to press time, however Senior Assistant Commissioner of Police Stephen Dean said police were looking into the allegations.

This is not the first time a gay man claimed to have been attacked during a Bahamas Carnival event.

Last year, police were investigating allegations that a Nassau Street brawl captured on video was the result of a homophobic attack.

The brawl took place on the sidelines of the Road Fever street parade.

A video recording of the fight went viral alongside a voice recording of a distraught woman, who claimed that two of her gay friends were beat up because of their appearance.

In the video, a group of men and women can be seen swinging metal chairs and fighting. Although several police officers were standing by, only a male inspector is seen making an attempt to break up the fight as three women officers watched the scene.

“My two gay friends just get beat like a dog,” the unidentified woman sobs in the 2016 voice recording.

At the time, then Assistant Commissioner Stephen Dean said that no complaint had been filed in connection with the matter. He said he had not received any report that the matter involved members of the LGBT community.

Didn't hear anything from the "Pastors" either, not one prayer for the assaulted,to busy organizing a Service of Thanksgiving for the attackers.

The Bahamas is rapidly developing a reputation on internet travel sites for danger, violence, high prices, huge hidden hotel taxes and fees, rude and lazy service, and mediocre, vastly overpriced food and drinks. And nasty Customs/Immigration officials. Pretty soon we all be back to growin' tomatoes for a living.

Hey Clamshell If you wanna know the truth; every thing you mention is true and how it really is here, or better yet, its how we are as a society.

And the the fact surprises me that we're not already back to growing tomatoes, because that's what we deserve!

So many like to present this as if its a slight problem and that if we let it carry on this is where we'll end up. The reality, we're alteady there, and we deserve what we've got comming.

It is truly a shame. Most everybody here on Eleuthera is friendly and we don't have as bad a crime problem (yet!), but even here the visitors are growing increasingly weary of being bled dry at every turn. Many long-term expats have their homes up for sale, planning to leave, no longer feel welcome in the Bahamas. Prices and fees and taxes keep skyrocketing, utilities and services such as health care and air service grow steadily worse.

Those Jamaicans(duty ones) bring all their nasty ways with them,we might not agree with persons lifestyle, you have no right to engage them in a fight in public festivals.Sit small a go back from whence you came,better yet hell,cuz average Jamaicans fed up to with y'all.

and he didn't go to/ or contact the US embassy?

Unfortunately this is of no surprise to me based on the sad state of our country...

So many like to preaent this as though our problems are the fault of aomeone else.

Rest assured people, it is not the Jamaican or Hatian that has caused this race to rhe bottom of Bahamain society; nope, that honour belongs to all of us.

We are what you see, that is, a nation of lazy backward thinking nasty crooked people.

So many like to present this as though our problems are the fault of someone else.

Rest assured people, it is not the Jamaican or Hatian that has caused this race to the bottom of Bahamain society; nope, that honour belongs to all of us.

We are what you see, that is, a nation of lazy backward thinking nasty crooked people.

John gonna call you a racist and foreign. You speak the truth my friend and I am a Bahamian!

In an interview with The Tribune minutes after leaving Doctors Hospital where he was treated for a laceration to his head, 24-year-old Adrian Brown, *who was born in Jamaica* but lives in the United States, said he wants the persons who were involved in the fight to be charged with a hate crime

.@ BMW first of all I have a mouth and brain to speak for myself. Secondly if you have been following the 'gay man attack' story you see it has no credibility. The 'victim' has changed his story more than once. More than twice and the 'cut ass' he got was provoked. If the dude was born in Jamaica he know what don't be tolerated here is even less tolerated in Yard. They put car tires around over there and set you on fir. We may be a nation of nasty, lazy backward thinking people but over 100 flights leave this country every day.. also many cruise ships...hop on one and go to a better place..go where your father is.

If true, it is a disgusting crime that demonstrates backward thinking and of course, should be punished accordingly. However, for now it is just an allegation with many holes including the exclusion of independent witness accounts by the media. The location, the aggressor, nationality of attackers and the words exchanged are not consistent even by the victim's own account. Something happened, but was it necessarily a "gay" attack. It could be that he is a gay person who was involved in an altercation.

So why is there is so much Hush, hush about the man charged with killing the two teen boys in Yellow Elder? He was charged today and is said to be a relative of the boys.

In case you missed it John, the Guardian carried a story on page two this morning that a certain Darwin Farquharson of Infant View road was charged with the assault on the "Jamaican" American citizen and will appear in court on May 17. I also happen to agree with Chucky that we have become a nation of disgusting, slovenly, tiefin people, if that wasn't the case we wouldn't be trying to crawl out of the cesspit we're in now.

that we have become a nation of disgusting, slovenly, tiefin people, if that wasn't the case we wouldn't be trying to crawl out of the cesspit we're in now.

Speak for yourself. That's is what y'all want us to believe. But it is y'all what bringing the dirt and filth here (and the thieves( y'alls calls em white collar)) trying to get us (Black Bahamians) to swim in it.. But your time is done. Your 450 years of rule has come to and end Bahamas is for Bahamians.....get it? forget your redneck statements about the Real bahamian people..tell us your history first then judge!

My brudda, my people been here since 1779, when yours reach? We should wish for another 450 years of my people rule, look where just 50 years of ya'll people rule got us racist asshole. Res Ipsa Loquitur.

This is always the hidden message by the colonialists in The Bahamas .... and this is why the Fweddies are always spewing colorist doctrine

Brudda Sheep I 'ain on your run, I'se got black and white blood in my very Bahamian veins and am what is considered a hard red conchy joe.Colonialism died here fifty year ago but our bruddas dem still in love with the Sirs, Dames, QC'c and all the colonial trappings they supposedly disdain. I grew up listening to stuff like black is da beauty and red is the four foot hog.The hard fact remains that ain been no whiteys and no hard red people runnin tings roun here for the last fifty years so look what ya get when ya tired a what ya had, let da fweedies dem talk dat!

If we wanna know what we done accomplish in our own independent ruling nation, we can look around. And if we wannna know what we go to look forward to, we can just look at our brother"s countries around Africa, that is where we headed. All countries run by people like us, end up the same, again look at African nations!