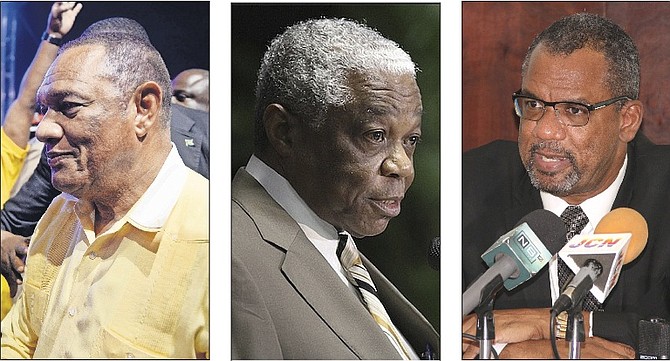 Although the full results were not released by the Parliamentary Registration Department last night, it appeared that the former governing party only secured four constituencies: Englerston; Cat Island and San Salvador; South Andros and Exuma and Ragged Island.

Up to press time, the constituency of Fox Hill, represented by former Minister of Foreign Affairs Fred Mitchell since 2002, was said to be in a recount.

It was the heaviest loss for a governing party in recent Bahamian history.

According to the results available as of last night, the PLP only won one constituency in New Providence: Englerston with the area’s incumbent Glenys Hanna Martin. The only other Cabinet minister who retained a seat for the PLP was Philip “Brave” Davis in Cat Island, former Deputy Prime Minister and Minister of Works.

Picewell Forbes, who retained his South Andros seat, was a backbencher in the Christie administration, while Chester Cooper who won Exuma, is a newcomer to politics.

Headlining the list of defeats is outgoing Prime Minister Perry Christie, who lost his Centreville seat to the FNM’s Reece Chipman, a seat he had held since 1977 back when the constituency was referred to as Farm Road.

Embattled former Marathon MP and former Education Minister Jerome Fitzgerald lost his seat to the FNM’s Romauld Ferreira, after battling multiple controversies during this last term, mainly the Rubis gas leak and recent revelations that he had solicited lucrative contracts from Baha Mar while he sat in Cabinet.

Shane Gibson, the former Minister of Labour, lost his parliamentary seat of Golden Gates to Michael Foulkes, a seat Mr Gibson has held since 2002.

The PLP, which had secured two seats in Grand Bahama in the 2012 general election, now will have no representation on that island after both former Tourism Minister Obie Wilchcombe and former Minister for Grand Bahama Dr Michael Darville lost their West End and Bimini and Pineridge seats, respectively.

The PLP also won Marco City in 2012. However, the winner of that race Greg Moss quit the party in 2015. He did not offer himself for re-election and the seat last night was won by former FNM Senator Michael Pintard, according to the unofficial results.

In southern Shores, former Environment and Housing Minister Kenred Dorsett lost his seat to the FNM’s Frankie Campbell following five years of frustrating and recurrent fires at the New Providence landfill, with arguably the worst fire taking place on March 5.

Yesterday’s crushing defeat of the Christie administration signals the end of the party’s controversial recent term in office, which was marred by allegations of corruption, malfeasance, cronyism and inefficiency.

For some observers, the PLP’s defeat also represents a new era in Bahamian politics, characterised by the removal of the old guard like Mr Christie and Dr Nottage from governance, and the subsequent election of Dr Hubert Minnis as only the country’s fourth Prime Minister in 44 years of independence.

The PLP had a tough way to go they were always criticized. The FNM Government will have a much easier time, but the results will speak for themselves and they will not be able to hide their results

The PLP was criticized because they were corrupt to the core and acted as though they were above the law. Time will hopefully now reveal just how corrupt they were.

Yes, the PLP created a tough way for itself on all fronts Birdie, by being endemically corrupt. Justice must be seen to be done, in as much as actually done. Transparency mean see through, clear, not opaque, concealed, hidden. Sealed documents, muddy opaque policies, Concealed contracts and kickbacks, Hidden VAT $$ Tell Halketis don't go far.....

Michael Halkitis, Khaalis Rolle and Arnold Forbes were all tremendous disappointments. They joined the smoke and mirror corruption gravy train like a fish takes to water.

If these promising young men had the well being of Bahamians at heart instead of personal gain, they would have stood with Greg Moss, Andre Rollins and Renward Wells when they pushed back against PM Perry Christie for abusing the electorates affairs.

You folks sound like Trump lock her up. you all will find out soon enough no money, VAT or otherwise was stolen by the members of Parliament. It was a ploy used by The FNM to garner votes , and you all fell for it. By the way now that the PLP has gone on whom will you folkes spew your venom

Birdie........we will spew it out on you if you keep thinking like you do. Why not be kind enough to at least let Dr Minnis fail his self. Everyone can't be wrong and you be right. Look at the number of people who voted against the PLP......... Loud voices you think?...or just dumb Bahamians?

As long as you are around we will spew it on you and your boy Tal. By the way where is he I haven't heard from him since the red "salami" hit.

I don't like to get religious , and I don't give much credence to all these self declared prophets about the place, Call it fate, karma, whatever. "Something" bigger than us removed all these seemingly immoveable giants in one fell swoop. I'll call it the right hand of God.

When a party gets voted out of government, the good and the indifferent invariably get swept out with the bad. I will not miss any of these people. They were too caught up in covering up for one another without primary regard for the interests of the people who put them there. Fred and Allyson and Jerome and Brave telling us that anyone challenging news and statements emanating from the government was wrong, an idiot, didn't know what they were talking about, trying to undermine the government and on and on. But it was okay to give us half truths, slanted information, any and everything to make the government appear as if it could and was doing no wrong and everyone else has some grudge, is misinformed or just plain stupid. The final final straw for me was Jerome reading people's private emails from the floor of the house while trying to attribute them as destabilizing the government. When the Data Protection Commissioner pointed out that the only reason she could not take action against him was because it was done in Parliament, the PLPs answer was to fire her. When Jerome was fined by the Supreme Court for his actions regarding these emails, their answer was twofold, that the court had no jurisdiction over Parliament and then to conduct an investigation into the personal lives of the judge and her family. Those in the PLP who stood by and said or did nothing are as bad as the perpetrator.

I remember The good Rev. Dr. Myles Munroe predicting this before his untimely demise.

A few days ago, Big Bad Brad, in a press statement, told former PM Hubert Ingraham to "crawl back into his hole". Well, I guess Perry and Brad must have found one too. Because they sure as hell went underground since election day.

Birdie, you must be in denial. Did the FNM conjur up the mess at BOB, the millions missing from Road Traffic, the Customs money missing in Abaco, Mr. Fitzgeralds own emails, Maynard-Gibsons stores in Bahamar, the increasing murder rate, the failure of Mortgage relief, and the fact that the PLP did not accomplish their 100 day promises in five years, etc.,etc., etc. That is the biggest crock of s--t that shows your blind devotion to a PLP party no matter what they do. God bless your ignorance.