Galanis Wants Sears To Lead Plp Affairs In The Senate 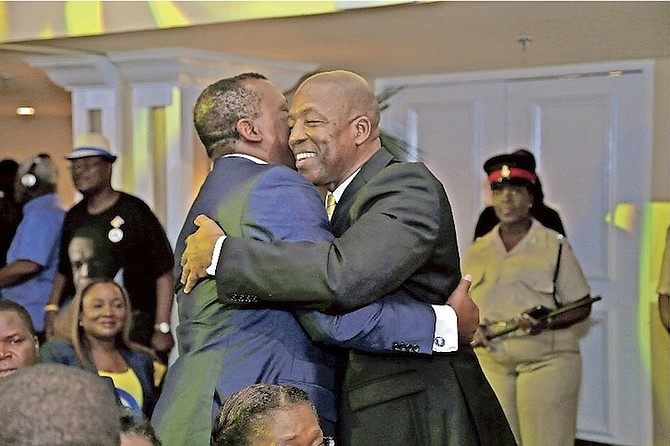 FORMER Progressive Liberal Party (PLP) MP Philip Galanis yesterday suggested that the party should turn to former Attorney General Alfred Sears to lead its affairs in the Senate, or “lose out” on its “best chance to signal positive change” in the wake of its landslide defeat at the hands of the Free National Movement.

Mr Galanis, a noted supporter of Mr Sears in the past, urged the party to “put its best foot forward” as it looks to rebound for its current state.

Noting Mr Sears’ years of service to both the party and the country, Mr Galanis said the appointment of Mr Sears to the Senate would signal “true growth and understanding” on behalf of the party.

“The PLP must re-engineer itself. The party has to re-engineer, reconsider and then recast,” stated the one time member of Parliament for Englerston.

Mr Galanis was responding to questions on how the PLP would re-establish itself after only capturing four of the 39 seats contested during the general election.

Former Prime Minister Perry Christie resigned as leader of the PLP with immediate effect during a meeting at the party’s headquarters Monday night.

Of the move, Mr Galanis said Mr Christie’s resignation serves as the “perfect opportunity” for the party to “right itself”.

He added that the party now was in the best position to go from “strength to strength.”

Mr Galanis suggested that former Deputy Prime Minister Phillip “Brave” Davis would lead the party from Parliament, while Mr Sears should do so from the Senate.

On Monday night, Mr Davis said he would fill the post of party leader in view of Mr Christie’s resignation, in accordance with the PLP’s constitution.

Mr Davis is also expected to be sworn in as leader of the Official Opposition.

“Leadership as far as the party and Parliament is considered, Mr Philip ‘Brave’ Davis will assume that role and I think will do it well,” Mr Galanis said.

“But the biggest questions will come in the Senate. I really hope that what we will really see there is a foreshadowing of where the party will be heading,” he added.

“That is where Mr Sears has to be. I hope that Mr Sears is one of those members because he has served this party with distinction and purpose for quite sometime and he has proven that he has what it takes to move this party forward.

“There will be new faces, but the appointment of Mr Sears will set the pace for us moving forward.”

On Monday, Mr Davis was unable to tell The Tribune when the party would hold its next convention.

Meanwhile, former Tourism Minister Obie Wilchcombe revealed that he will run for chairman of the PLP at the party’s next convention as Bradley Roberts reportedly will not seek re-election to that post.

Mr Sears challenged Mr Christie for the post of party leader at the party’s convention in January but lost by a large margin. He ran unsuccessfully for the Ft Charlotte seat in the general election, but lost to the FNM’s Mark Humes.

Doubt this will happen because that will force the issue of Perry/Brave / Mad Brad/ fweddweecka admitting they made a mistake during their campaign...

Comrades! Seems Philip Galanis is holding early PLP leadership auditions for Alfred Sears.....Sorry but Galais won't fly as the PLP's rescuer.
The PLP needs a likeable, fresh face young man's or woman's to step into the leadership race that will scared the living bejabers outta 'Brave' Davis....The PLP should slide over to have a chat with the DNA's 2017 candidate Arinthia S. Komolafe.

Plus Galanis has a shady, tainted background. He should leave the PLP as well, to younger people with an actual ethical and moral compass.

REPOST: Respectfully PLP leadership, this will not change anything! We want a robust democracy in our Bahamaland, this also include a robust opposition, (just in case), See, we (the Bahamian people) just divorce yall the other day, we have a new 'squeeze' (FNM), however, we know that absolute power corrupts absolutely, therefore we always 'checkin out sometin on the side'; but having the same face in leadership of the same party (PLP) we just had a bitter divorce with the other day? Only a fool will bring them back in their house! We need to see progress! We live in an information age, those 'smoke n mirror' tricks days are gone, and unfortunately, that seem to be the modus operandi of the ole PLP guard (aka DINO's). ALL THEM 'GATS' TO GO!

Brave is the interim leader ........ This is what will play out by Christmas:

Regardless 3 years, 1 month ago

.....Sears will be too busy working in the background with his good buddy Jeff Lloyd.

The PLP messed up by mixing up Church and State ........ I would advise Minnis to separate God & Caesar when it comes to national politics/governance

Comrade Realty_Check, don't know about the habits Catholics but I use have these two Jehovah's Witnesses who would come knocking on my front door religiously like clockwork on weekends....but I gave each one them one my specially baked marijuana laced brownies - like three months back - and I haven't had visitation at my front door since. I thinks they still too high remember my street address,

When I lived with my aunt and uncle in Montell Heights, the Jehovahs used to come round, and I used to welcome them and debate them. At the time, there were around 2-3 million JWs (now there are over 8 million) in the world. Since the JW's believe that only 144,000 of the just will be raptured, I used to point out that my odds were very slim. Considering that in 1986, they believed that all but 9,000 of them were already chosen to enjoy heaven, just by statistics alone, I would not make it. Plus I didn't fancy knocking on stranger's doors, recruiting even more, because that very act would further dilute my chances. And then there is that special song that only the chosen know.

I pointed out that I am tone deaf. I cannot even carry a tune in a wheelbarrow, so I am buggarshmucked in that department as well. After listening to me, some of them were quite shaken up, and I may have started the apostate process in one of two of them.

My aunt wouldn't approve of my religious debates, and often pointed out to me that the devil can recite Scriptures for his own purposes. When I told her that it made more sense that hell shouldn't be a place of misery, but rather the devil should reward you for doing his work, she would grab the broom and try to hit me.

This is a man for whom I have the greatest respect. If the PLP wishes to become above the gutterbox element that it has woefully descended into, it must raise the brains of its grass roots or leave them to dry up in the dust. In any case, without salient thought they are neither relevant nor worthy of a vote.

As far as I am concerned, the PLP could go burn in hell! Sears needs to simply crawl back under the rock from whence he cometh. With Sears leading the party, it would be more of the same BS. Firstly, he is not sincere about making the Bahamas a better place. Secondly, he is too attached to the numbers crew, and we know that if God forbids, the PLP wins with him at the helm he will cater to his masters. Thirdly, this nincompoop brings nothing new to the table-He is void of any bright ideas and he is stuck in his old PLP ways. But for the sake of democracy, as Pastor Troy mentions in his post above, I would say let Chester Cooper lead the PLP. At least his philosophy seems to be different than all the other wutless PLP members who still behave as if only them have the God given right to run the Bahamas.

A change in leadership will mean nothing significant for the PLP!

The bedrock of corruption and cronyism will always exists within the bloodlines of the regressive liberal party (RLP). Alfred Sears is just another longstanding minion of the late Lynden Pindling and their is really no difference between he and Perry! Both of them were initiated into politics under Pindling and all of them have demonstrated the same failed tactics. The RLP is nothing more than a racketeering influenced corrupt organization of crooks and cronies who's only desire is to pickpocket the wealth of our country for personal gain! Get lost! It we be decades before the Bahamian electorate even thinks about trusting them again. And as long as the RLP keeps presenting candidates like Fred Mitchell, Shane Gibson and others, they will continue to lose.

Amen to that my friend!