Minnis Takes On Works Duties Until Bannister Is Sworn In 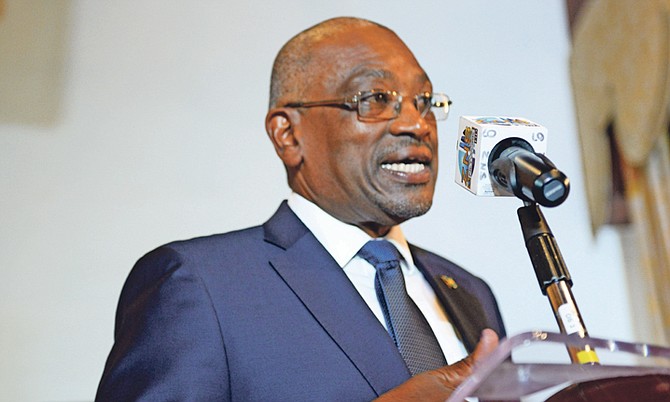 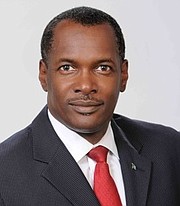 PRIME Minister Dr Hubert Minnis yesterday assumed the Ministry of Works portfolio until Desmond Bannister can be officially sworn in next week, according Anthony “Ace” Newbold, president of the Bahamas Press Club.

Mr Newbold has been named as the prime minister’s new press secretary, however he will not officially assume his duties until next Tuesday.

On Monday, 15 ministers took the oath at government house, 12 substantive ministers and three ministers of state.

Carmichael MP-elect Desmond Bannister was absent from Monday’s ceremony because he was out of the country.

Mr Bannister returned to New Providence yesterday afternoon and will be sworn in at Government House on Monday, along with senators and parliamentary secretaries.

Mr Newbold said because the Ministry of Works is a “substantive portfolio” it cannot “be left hanging out there.”

According to sources, there were official documents that needed to be signed immediately for “crucial projects” in the ministry that could not wait until Mr Bannister returned to the country.

“Desmond Bannister will be back in town shortly, but a portfolio like that you cannot leave hanging,” Mr Newbold told The Tribune yesterday.

“It’s a substantive portfolio that cannot be hanging out there so Dr Minnis assumed the portfolio until next week.”

In a statement from Bahamas Information Services on Tuesday, it was revealed that the Cabinet ordered forensic audits of several government initiatives as well as audits of each government ministry.

The statement said if wrongdoing is uncovered, the law will take its course.

“It (Cabinet) decided that all ministers would conduct an audit within his ministry, including departments and agencies funded by the public purse, of persons hired on contract, their job title/position, salary and period of contract,” the statement noted. “It would also be determined whether there are also contract persons attached to a project or projects funded by an international agency.

“It was agreed that where persons were hired with specialty skills who have been performing needed services, that every effort would be made to retain their services.

“Forensic audits will also be conducted on the Urban Renewal Department, the Bank of The Bahamas and BAMSI, among others.

“The Internal Audit (Department) of the Ministry of Finance will also be reviewing processes within ministries and departments to bring about greater efficiencies.

“The government is seeking to curtail unnecessary expenditure and the results of these audits will assist it in determining the way forward.

“Where persons are found to be in breach of the Financial Administrative & Audit Act, to have misappropriated public funds or engaged in unlawful activities, the law will take its course.”

During the swearing-in ceremony earlier this week, the nation’s new leader pledged that the government will be marked by “order and punctuality”.

He further suggested that this administration will be one of less talk and more action.

There are 19 ministers in total at the helm of this country’s government.

In May 2012, the Christie administration appointed a Cabinet of 21 - 16 ministers and five ministers of state. Three parliamentary secretaries were also appointed at the time.

Dr Minnis also explained his decision not to take on a substantive ministry or portfolio, aside from those items which fall under the Office of the Prime Minister. He was previously minister of health under the former Ingraham administration.

“And as I have repeatedly noted, my government will be one of collegiality, collective responsibility and collaboration. I pledge also collaboration and regular consultation with parliamentary colleagues,” Dr Minnis said on Monday.

Comrades! My Four and a half cents red cabinet source - says there's more to this missing in action cabinet appointment than the PM isn't demonstrating 'It's The People's Time' transparency?

It is amazing that the sunshine government is hiding Banister? Where is he? What is wrong? I think he may have gone on a cruise around the world.

Mr. Banister returned to new providence yesterday, further down Mr: Banister will be back in town shortly all in the same article. which of the two is the truth?

Funny, funny you always make me laugh keep it up.

Following is a listing of the duties of the former Prime Minister.

Will someone in the know kindly advise if the status quo is to be maintained.

I like the press secretary idea. Bannister off island, big deal, stop looking for Drama.

The more successful that the FNM are, OR the more that they uncover of PLP criminality, the more vituperative that birdie and Tal will become. They have defiled themselves by letting the party have their dignity and their soul, and now they assume everyone is a dirty political whoremonger exactly as they are. They cannot ever believe that anyone can be patriotic and altruistic, because it is beyond their scope of experience as to how their partisan party works.

The venom that you see here spewed by these political pimps may be the result of cognitive dissonance of the vast gulf between their ethics and the new government -- or it could be just living in the slime that these people are used to.

The Ministry of Works portfolio is the single most vulnerable Ministry to political graft and corruption ......... That is why Perry gave it to Davis ........ If you contrast how Neko managed the MOW under Ingraham - and how it became a cesspool of corruption since 2012, that is all any Bahamian needs to know about how vital it is to any government ............... Can Bannister clean up the blatant "crony contractor" system, no-bid contracts, 30% excess overpricing, and MOW employee kickbacks culture that presently exists???????? .............. Time will tell

You sure that you should be posting that information. . .even if it is true. . .remember J Fitzgerald e-mail fiasco. . . if you leave the barn door open the house will get out and run off. . .

Politicians appointed as Ministers dont miss swearing-in ceremonies.. do you attend college 4 years and then not go to graduation because you had something clearly more important already planned? something very significant led to his absence.. the public have a right to know what...

Boy.... Well I skipped my college graduation to go get drunk! High school too I think.

Comrades! The People's government' were promised we would have 16 cabinet ministers but it wasn't suppose to include the PM. The new missing from his new ministerial duties as the substantive minister of works - has now missed not one but two swearing-in's? Comrades, wasn't 'It's The People's Time' - this red government had promised to smoothly and efficiently runs on?
Still my Four and a half cents red cabinet source - says with all their Four and a half cents - says to me to remain of suspicious mind - cause there could be some more to this than is being made transparent - that a different red has done met with the PM to assume the portfolio of MOW?

To all the naive People. Who say dumbness about Bannister.

The reason the damn man was off the island was because he was attending a funeral service because one of his family members died.

People are always so quick to accuse other with no information. And the reason I know this cause I was at the funeral also that was held in Grand Bahama, the body had to come from fort Lauderdale. Where he was with the family

Y'all Really need to get your act together. If a family member of mines died I would miss the ceremony as well to tend my family. Family always come first.

So will we get a mass cleanup and some serious illegal dumping enforcement before the US ambassador arrives to meet this nastiness?

The fact that Minnis and fellow cabinet minister (Bannister) are not willing to be transparent with the Bahamian people does not speak well of all the promises made by Minnis about the intended transparency of his government. When you aspire to serve the public at the highest levels of elected public office you give up certain fundamental privacy rights in recognition of the public's interest and right to know. Minnis and Bannister should not prefer public conjecture over the public's right to know. If Bannister or a member of his immediate family has a serious medical condition requiring his absence from being sworn in as a cabinet minister and taking charge of his ministerial portfolio, then that fact should be disclosed. Then again it could be that Bannister has a very material conflict of interest that absolutely must be, but cannot easily be, unravelled or otherwise resolved before he assumes his cabinet post.

Will Minnis seriously consider putting a sick man in a demanding Cabinet post like Ministry of Works???? ...... After all of his smart strategizing???