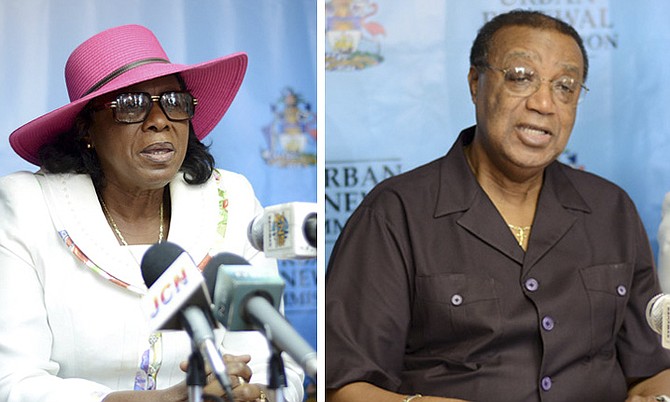 AS the Minnis administration prepares to have a forensic audit conducted into the Urban Renewal programme, Algernon Allen revealed yesterday that he and Cynthia “Mother” Pratt resigned as co-chairs of the initiative last Thursday.

Mr Allen said they have no concerns about what the audit may reveal as their role was largely “ornamental”, with neither he nor Mrs Pratt having a major part in the decision-making processes of the programme.

He told The Tribune: “In the audit which had been conducted of Urban Renewal which was laid on the table of the House by the Sspeaker last year, both co-chairs were described as incidental to the whole Urban Renewal decision making process and as having limited to no authority and as being ornamental as opposed to substantive in terms of decision making.”

Asked if he sees the forensic audit as politically motivated, Mr Allen said the “victor has to have his day.”

“It is clear that the mood of the country and the comments by the government is to seek the fullest of disclosure in respect to a myriad of matters,” he said, “so from the perspective of the co-chairs we welcome the full transparency and we further would urge the government to continue the transformational work, the socially uplifting work and the great Christian work of Urban Renewal.

“Mother (Pratt) has always opined that Urban Renewal is the work of the Lord and in this work we are the servants of the Lord, to which I add the Lord protects his servants.”

As co-chairs, they played a “limited” role in approving contracts, Mr Allen said, adding that their work mostly involved expanding the scope and reach of the programme.

“Within four and a half years we were instrumental in growing the (Urban Renewal) band from what was a twenty-odd rag tag grouping into what is now a 600 strong membership,” he said. “We were responsible for initiating and driving along with the social partners the repair of several thousand homes. We were responsible for putting in place one of the most energetic community sporting programmes in the urban areas which touched thousands of lives of urban youth. We, through our social partners, brought 40 trailer load of books of reading materials which were given free of charge throughout the country. The whole story must be told. It’s a story which Mother and I are very proud of. Yes it had its areas of challenge but when the whole story is told it is a beautiful story which is the work of thousands of caring Bahamians seeking to uplift the lives of many, many thousands.”

Mr Allen also called on all political appointees to resign from their posts.

“It would not have been appropriate for us to stay on to await the decision of the new administration with respect to our posts,” he said. “Having been appointed by one Cabinet, and I advise all those of similar appointments, the protocol is when one is appointed to a position at the instance of a government’s decision, when that government changes then it is appropriate and in fact mandated by custom, by protocol that persons resign immediately so that the incoming government can have a clean slate to write their plans on and appoint their people.”

Urban Renewal has been credited for the social impact it has had in inner city communities.

However, controversy developed last year after Auditor General Terrance Bastian produced a report into Urban Renewal’s Small Home Repairs programme which said contracts for the repair of small homes in New Providence were sometimes issued to contractors without proof of ministerial approval.

The report also said 11 contractors were paid $171,000 to conduct repairs that were either incomplete or never done.

The report also criticised the programme for its “lack of due diligence (and) level of transparency and accountability,” as well as for having too many gaps in its execution, quality of work done and overall management.

The report said contrary to the mandate of the Small Home Repairs programme, homes that were repaired were not always occupied by people who were elderly, disabled and unemployed.

The report’s findings were fiercely disputed by the Christie administration.

Former Deputy Prime Minister Philip “Brave” Davis tabled a report in the House of Assembly last year that sprung from an “independent review” into the programme.

The report, which was conducted by Island Dimensions & Development Co Ltd and JD Chisholm & Associates, disputed some of Mr Bastian’s harsh findings relating to the quality of work performed.

The government has also said that all Cabinet ministers will conduct audits within their respective ministries.

“The Internal Audit of the Ministry of Finance will also be reviewing processes within ministries and departments to bring about greater efficiencies,” a statement from Bahamas Information Services noted on Monday.

“The government is seeking to curtail unnecessary expenditure and the results of these audits will assist it in determining the way forward.

“Where persons are found to be in breach of the Financial Administrative & Audit Act, to have misappropriated public funds or engaged in unlawful activities, the law will take its course.”

Rats abandoning a sinking ship. It will be discovered that the ornamentals bled the programme dry.

Ornamental????? Maybe you'll be hanging from the XMAS tree in Foxhill this year???

Lot's of us Bahamian's only use ornaments for a year. Then they travel's to Christmas land buying a fresh batch!

Wonder how much money they were getting for being ornaments????

Those two people give me the shivers. Good riddance useless ornaments!

Comrades! Thirty-days after a general election would be enough time clean-house, before declaring a National Day - dedicated to saying "Good Riddance' To ALL The Previous Administration's Political Appointees!

Urban renewal was put in place by Mr: Christie , The FNM government can just close it down. It is Mr: Christie's vision, He was rejected by the Bahamian people, they should close Urban renewal down right away.

PROSECUTE ALL WHO HAVE STOLEN FROM THE PUBLIC PURSE - EVERY LAST ONE OF THEM.

Christie set up UR2.0 as a slush fund for Davis & Co to manage ........ A forensic audit of the total spending of UR2.0 for the 2012-17 period should be done and Pratt, Allen & Reckley should account for every frigging cent of the countless tens of millions that were pissed away

halloween is just around the corner and we need ornaments.

"Ornamental" that is classic! Did they just realize this?

Ornamental is usually something that is - Beautiful but Useless, they're not exactly beautiful but they are useless!

"Allen said they have no concerns about what the audit may reveal as their role was largely “ornamental”, with neither he nor Mrs Pratt having a major part in the decision-making processes of the programme."

Translation, they were paid for the use of their "good" no old tief name and they really didn't care what skulduggery was going on around them as long as they got their money

Can I apply for that position, please?

Minnis is doing nothing but firing Urban Renewal people under the very crooked big wigs (like Pratt and Allen) who actually voted for him in his landslide win in order to replace them with supporters he considers to be more loyal to himself. This is getting really ridiculous.

And where is the evidence to support your allegations and why isn't Minnis doing a darn thing to hold Allen and Pratt accountable for all the wrong doing at Urban Renewal that he was constantly harping on about throughout the FNM election campaign? Pratt and Allen are going to be given a free pass to ride off into the sunset like everyone else Minnis has decided to give a free pass to!