Davis: Opposition Will Not Allow Govt To 'Misrepresent Or Distort' Plp Legacy 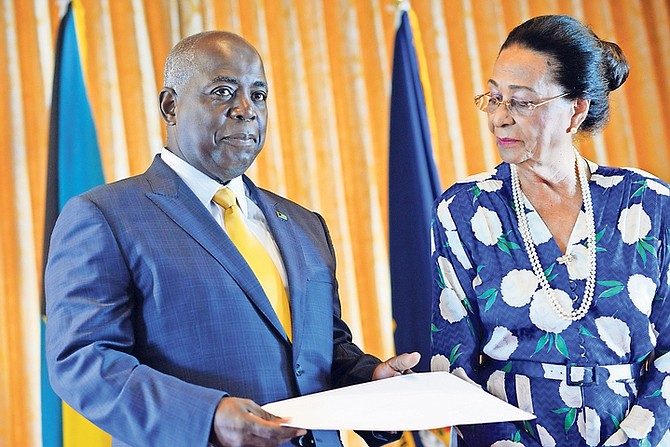 FORMER Deputy Prime Minister Philip 'Brave' Davis has advised that as the country's newly installed Official Opposition, the Progressive Liberal Party (PLP) under his leadership will not allow the government to "misrepresent or distort" the party's legacy in governance.

Mr Davis made the declaration as he accepted his instruments of appointment to become the new leader of the official Opposition from Governor General Dame Marguerite Pindling during a ceremony at Government House on Friday.

As he expressed varying levels of gratitude to those in attendance, the Cat Island, Rum Cay and San Salvador MP emphasised that his administration would not "acquiesce" to the new government if it pursues any policies or practices that could "hurt vulnerable Bahamians".

Mr Davis also noted that the Opposition, under his guidance, would not stand aside if the government in any way compromises on the nation's "sovereignty".

To applause, Mr Davis said: "You will find, I believe, that we are quite up to the challenges ahead. We will be few, but we will not be alone."

Of the group's intentions Mr Davis said: "While we are doing this critical work of revitalising our party, we will also at the same time hold the new government to account. That is a primary function and duty of Her Majesty's loyal Opposition.

"I have every intention, as do my colleagues in the House, of proving ourselves equal to that duty from day one and throughout out time in Opposition.

"As citizens and devoted patriots, we sincerely hope the new government well. Where we can find common ground with them, they will have our full support.

"But, they should not look at our small numbers in Parliament and draw the wrong conclusions. Let me be clear: we will not allow the new government to misrepresent or distort our record of achievement in government.

"We will not acquiesce if they pursue policies or practices that hurt vulnerable Bahamians and we will not stand aside if they compromise our sovereignty as a nation.

"We will be sustained by the example of our party's founders; by the commitment of our representation; by the energy and optimism; by a new generation of supporters; and by the substructure of the good people of the Bahamas, who I believe will continue to hold all leaders of our great nation to the highest standards."

In the wake of last week’s stunning general election results, former Prime Minister Perry Christie announced on Monday night that his political season had come to an end, as he officially resigned as party leader.

His resignation has opened the door for what many within the party have called a chance to “right itself".

Singling out Mr Christie on Friday, Mr Davis thanked the former Prime Minister for his 40 years of service to the Bahamian people, adding that despite the ending of his journey, Mr Christie always attempted to do his best for the country.

"I accept that our former leader tried his best to do the best for the Bahamian people and despite the ending of his road as leader, we remember him as a patriot and one of the great, great builders of the modern Bahamas," Mr Davis said.

"I therefore take pride, speaking not only for myself, but also on behalf of the many thousands throughout our nation in expressing our deepest gratitude and appreciation for the tremendous service that he gave our nation for more than 40 years."

Mr Davis admitted that the PLP was in a "season of change", which he said would attract those interested in participating in the "critical work" of revitalising the party.

The former Works Minister went on to dismiss speculation that the party is in a state of despair, contending rather that a spirit of "determination and excitement about moving forward" had already began to resonate amongst officials and supporters.

"Last week's results should prompt real and thorough self-examination; and indeed that process has already began. It is a process we intend to undertake unflinchingly with both humility and candour.

"We do so with a sense of urgency too, because we believe that the values and missions of the Progressive Liberal Party must remain essential and indispensable to our country.

"We are ready to renew the promise of our party for a new generation of activists, servants, supporters and fellow citizens. This process will begin on the ground and extend into every community throughout our country."

Mr Davis said the PLP intends to listen closely to those who subscribe to the ideals upon which the party was established and those that have their own ideas about how to work toward social and economic justice in these changing times.

The new Opposition Leader said communication between the party and those supporting its rebuilding efforts will be a "dialogue" and not a "monologue".

Of that dialogue, Mr Davis said communication and collaboration will be inclusive, adding that the party would leave no one out, embracing the entire Bahamian community.

lol we don't give a crap about the legacy of the PLP or any particular party. Your duty is to THE PEOPLE of this country. You are the opposition for the PEOPLE not for the PLP. Should the governing FNM be found 'wanting' it is your duty to sound the alarm and provide an alternative in governance and solutions.

This mentality is precisely why you got your asses handed to you in the general election.

I wonder if Lady Pindling has paid her property taxes recently??????

Hubert Alexander Ingraham July 7th 1973 Papa Tonton Macoute Government Of Gross Darkness Agenda- .The Constitution, Haiti's second, was promulgated on May 20, 1805.We, H. Christophe, Clerveaux, Vernet, Gabart, Petion, Geffard, Toussaint, Brave, Raphael, Roamin, Lalondridie, Capoix, Magny, Daut, Conge, Magloire, Ambrose, Yayou, Jean Louis Franchois, Gerin, Mereau, Fervu, Bavelais, Martial Besse…As well in our name as in that of the people of Hayti, who have legally constituted us faithfully organs and interpreters of their will, in presence of the Supreme Being, before whom all mankind are equal, and who has scattered so many species of creatures on the surface of the earth for the purpose of manifesting his glory and his power by the diversity of his works, in the presence of all nature by whom we have been so unjustly and for so long a time considered as outcast children.Do declare that the tenor of the present constitution is the free spontaneous and invariable expression of our hearts, and the general will of our constituents, and we submit it to the sanction of H.M. the Emperor Jacques Dessalines our deliverer, to receive its speedy and entire execution.Preliminary Declaration Article 12-14:No white man of whatever nation he may be, shall put his foot on this territory with the title of master or proprietor, neither shall he in future acquire any property therein.13. The preceding article cannot in the smallest degree affect white woman who have been naturalized Haytians by Government, nor does it extend to children already born, or that may be born of the said women. The Germans and Polanders naturalized by government are also comprized (sic) in the dispositions of the present article.14. All acception (sic) of colour among the children of one and the same family, of whom the chief magistrate is the father, being necessarily to cease, the Haytians shall hence forward be known only by the generic appellation of Blacks.

Alex_ you hit the nail on the head! Its all about the"plunder loot pillage" When will they ever learn. Just like salami lover said, they are in power and we want it"

FORMER Deputy Prime Minister Philip Davis obviously have gone through several cases of pampers to have lost so much weight over the last 10 days!

For a guy that "supposedly" fearlessly faced several armed gangsters in his own home, he ain't looking so 'Brave' now!

They are unquestionably repeating Bahamian history and will disappear into obscurity as the UBP before them and for the very same reasons amplified beyond imagination.

The people showed "Bahamians First & We Believe In Bahamians" is not just a cheap political slogan to play with to swing the electorate! It is the God-given Constitutional right of the citizens of this country to expect no less from any political party claiming to represent the people of this country!

Big job ahead for the agents of goodness to clean out the scourge, vermin, criminals and diseases of the PLP.

"hold the government accountable" ???????????? I think the boot is on the other foot and much will be revealed and we will see how accountable the PLP was---NOT.

Comrades! At least "Brave" show up for his swearing-in appointment with Her Excellency Dame Marguerite....Unlike the Reds still missing from the cabinet the yet be sworn-in minister of works - because of a funeral by cremation.
It could be possible that the long delay could be very legit - cause of a funeral delay resulting from someone decided to carry da cremation urn on-board the Bahamaair plane as checked baggage - and it too gone missing?

I approve of your message. Tal is sinking to old lows. Not a shred of truth or humanity -- typical of the PLP though.

Tal, when you don't take your medicine your other personalities take over. PLEASE take you pills as prescribed!

It is not possible to distort the PLP legacy. Their past 45 years need to be erased from history...

Comrade ProudLoudAndFNM, I listening how's the reds going account for the legacy Long island's Reheasa? She is not just some easily-to dismiss blimp on your party's legacy, now is she? And, guess what.....Reheasa has close colleagues sitting around the Minnis's cabinet table...Remember a person of interest - her leadership running mate sidekick?

Personally, I want Davis to remain as Opposition (and PLP) leader for the next several years ....... for him to sit in Parliament while the FNM investigate the 2012-17 Black Pirate regime ...... I want Davis to finally be removed from Parliament in disgrace, tried in court for his malfeasance in office and be shipped off to Fox Hill Prison ....... That would be the perfect ending for this slime bucket Black Pirate-in-Chief

will never forget Brave's rant about 'the truth' when they were putting up billboards about the murder rate in 2012. He got 5 years to show us the truth.

You are a corrupt, scum sucking, lying, self serving, worthless POS Mr Davis and that is a fact !

Comrades! The On Her Majesty's Service Official Opposition Party (OHMSOOP) would be better to have appointed a 'temporary party leader' to steer them through the next 12 month - a party leader from outside the people's House of Assembly - with a parliamentary leader in the (HOA).

did davis own or benefit from any companies contracted and paid by urban renewal? did or does he own any trucks used to pick up debris from cleared lots In Nassau? Can we have a forsebic investigation of his and credibility gap Christie's bank accounts? If they have committed crimes can they be jailed? They are both overweight and that foxhell diet might slim demdown to healthy.

What happen to the euphoria that should accomplish a victory of this magnitude. I guess we should all work as consultant in the search for that VAT money. The chairman done say 'we know they didn't thief it.' Nothing's wrong with admitting you get swing. LMBWCJCAO!!!