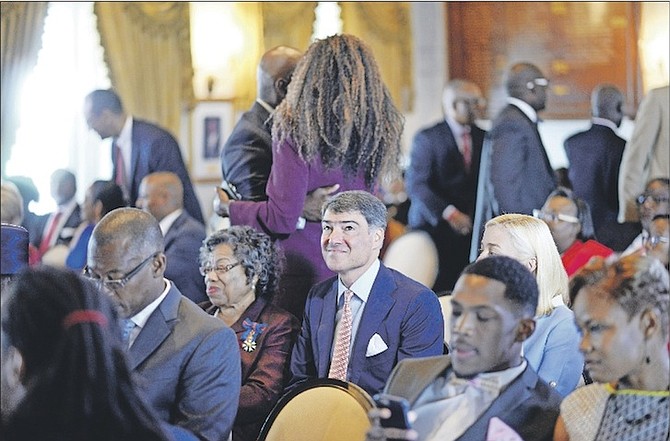 Centre of attention: Sarkis Izmirlian, the former developer of Baha Mar, caused a stir when he attended the swearing in of Prime Minister Hubert Minnis earlier this month. Photo/Shawn Hanna

Eyes were raised when Sarkis Izmirlian attended the new Prime Minister’s swearing in. Malcolm J Strachan says it might not have been what it seemed . . .

Quite a stir was made after images of Baha Mar’s former developer, Sarkis Izmirlian, attending the swearing in of Prime Minister Hubert Minnis flooded local media last week.

The whispers have been uncontrollable as the public waits to see what happens with the unsealing of the Baha Mar documents and what implications that may have on the future of the resort and its ownership.

An article in the Nassau Guardian’s National Review entitled “Bad Optics” characterised Izmirlian’s attendance as controversial, and perhaps a sighting that may have taken place too soon for the comfort of some.

People are afraid that the resort that has been embroiled in disappointment and uncertainty could face more down the road if Mr Izmirlian’s attendance of the swearing in is any indication of what may take place.

Perhaps we may be looking at this the wrong way. As opposed of looking at how it would be perceived, it should come down to the central issue of what is right and what is wrong. We ought to be careful to judge Mr Izmirlian’s presence at the swearing in, which may have very well been in a congratulatory manner, without a full understanding of the events leading up to this.

The previous government did a great job of creating a narrative that made Mr Izmirlian the foreign bogeyman that wanted to destroy Baha Mar’s prospects and positioned themselves in the minds of the public as the resorts eternal co-saviours, along with their Chinese co-conspirators. It was not long ago when ex-Prime Minister Perry Christie would have been heard showering Mr Izmirlian with compliments and crediting him as the project’s visionary.

Something obviously happened to alter the course of the relationship of the previous government and Mr Izmirlian. Former high ranking members of the Progressive Liberal Party (PLP) government launched a public onslaught on Mr Izmrilian - the man who they approached to aid in the redevelopment of the Cable Beach strip. Bradley Roberts, Shane Gibson, Jerome Fitzgerald, Fred Mitchell, Mr Christie and Allyson Maynard-Gibson, all publicly attacked Mr Izmirlian between 2015 and 2017 after the Baha Mar fallout.

It would be beneficial, in debunking the false narrative that Mr Izmirlian’s presence in the country, or in association with Baha Mar can somehow conjure up sentiments of ‘bad optics’.

Mr Izmirlian filed for Chapter 11 Bankruptcy after multiple deadlines were missed because China Construction America (CCA) was unable to deliver a completed project up to standard. The project was essentially bleeding for the whole of 2015 until the time it was shuttered in June of that year. Mr Izmirlian was paying employees out of his pocket.

Mr Christie, just weeks prior to the project shutting down, in a calculated attempt of misdirection, told the Bahamian people that all was well with the project, only to later claim that he was ‘blindsided’ by the Chapter 11 revelations.

We all know by now how the story played out: the government stepped in and quashed the Chapter 11 proceedings that were noted as the best option for the project by the US Court, but when implications on the Bahamas’ sovereignty, an agenda largely promoted by former Attorney General, Mrs Maynard-Gibson, came into play, the case was dismissed. Then the government moved to liquidate Baha Mar and the dream for the former developer - and 2,200 Bahamians - became a nightmare.

Mr Christie and his government masterfully played the role of nationalists against the foreign billionaire ‘bogeyman’ that tried to undermine our country’s legal system by pursuing Chapter 11 outside the country. They painted Mr Izmirlian as a bad debtor that could not afford to pay back a loan and henceforth, lost his property.

Many Bahamians still believe this false narrative today. But we should be digging a bit deeper if we want to understand the truth and the definitive difference between what is right and what is wrong in this matter.

It would be best to remember that in August, 2015, Sir Baltron Bethel, Mr Christie’s Senior Policy Advisor, reached out to a US attorney via email to suggest that a new equity partner be brought in to invest in Baha Mar as a means to secure the necessary financing to complete the project.

The revelations in The Tribune earlier this month of Jerome Fitzgerald’s emails to Mr Izmirlian between 2013 and 2014 were a clear indicator as to what the PLP was about - self-dealing and corruption. We can also see that there was refusal from Mr Izmirlian, who is considered a reputable and high character businessman, to play ball.

Mrs Maynard-Gibson, who was dogged in her attacks against Mr Izmirlian, also was questioned on multiple occasions of her very close relationship to the property through her husband’s jewellery stores.

Needless to say, it was very questionable for Mr Christie to select each of the aforementioned to lead negotiations in finding another buyer for the project. It was even more disquieting when Mr Christie announced that the project would be restarting its construction, that the same contractor that was the cause of the multiple unfortunate delays, was re-enlisted.

The new buyer of the property, Chow Tai Fook (New World Group), while well-known in the Hong Kong business world, have also been connected with the Triad crime organisation through its casino operations in Macau.

Say what you will of Mr Izmirlian’s presence at Prime Minister Minnis’ swearing in, but the facts remain that he was and still is committed to making Baha Mar successful. He, in a time when the public felt lied to by the government, truly exemplified what it meant to ‘believe in Bahamians’. For this, many, in the event that he is still able to purchase the resort, would be happy to see him retain what was rightfully his to begin with.

For the sake of maintaining our national heritage and sovereignty, we, the Bahamian people, must now expeditiously go about freeing our country of the Red China elements that have come to our shores with very unclean hands. This is truly a matter of national security for us, and for any Bahamian to suggest otherwise, they either need to have their head examined or are 'on the take' from their Red China paymaster(s)!