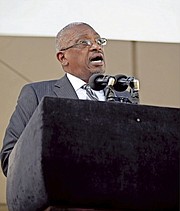 PRIME Minister Dr Hubert Minnis pledged to transform ZNS from what was a “state propaganda machine under the last government” into a “properly functioning public broadcasting corporation” yesterday as he spoke at Government House during a swearing-in ceremony for parliamentary secretaries and government senators.

“In 1992, the Free National Movement freed the broadcast media from state control,” he said. “It is now time to liberate the state broadcast agency from political manipulation.”

Dr Minnis appointed Pakesia Parker-Edgecombe, the MP-elect for West End and Bimini, as parliamentary secretary to the Office of the Prime Minister with responsibility for information and communications.

Dr Minnis also said that “in due course” he will appoint people to serve on various boards and councils of government corporations and organisations.

“I am especially excited to invite a new generation of young people to serve on government boards,” he said. “They will bring new energy, new ideas and a new perspective.”

Five parliamentary secretaries were also sworn in yesterday, including Vaughn Miller to the Ministry of Social Services and Urban Development; Mrs Parker-Edgecombe to her post in the prime minister’s office; Carlton Bowleg to the Ministry of Agriculture and Marine Resources; James Albury to the Office of the Prime Minister with responsibility for Abaco and Travis Robinson to the Ministry of Tourism.

never mind doc, he never ever makes any sense. empty barrel making much noise. the seven tried to get rid of him these others will succeed. It is not long now doc..

Birdie, I see you've reverted to form. Ya'll been eating those PLP road apples for so long the crow yinna eating now must taste like turkey buzzard.

Kay Smith appointment to the senate. The woman is unable to keep a job in the real world But she is Papa's girl so roc wit doc had no other choice.

How about a pledge to privatize ZNS and free the Bahamian people from this tax straining, biased, yoke around our neck. Taxpayers are sick and tired of paying for needless free riders. At the least half of ZNS's budget should be cut... like tomorrow. Why will my child and their children be paying for this useless crap?

Comrades! There was a time when ZNS was a radio station ran like a fine Swiss watch. The citizens tuned in religiously for their fill the days news, sports, mail boats sailing schedules and who dead and who going funeral home them and what time they going be churched. Them were the good old radio days atop Collins Avenue - I myself did a live-on-air talk show at ZNS.

It was so blatantly obvious that it was a PLP political platform paid for by our taxes. The "peoples station" like hell it was. In talking about the nightly 7 pm news a friend of mine disclosed that only now has he started watching again as previously it was Perry-Perry and more Perry. In fact it should have been renamed the Perry Christie hour. On another note the programming is so out of date and out of tune. Every afternoon about the time when kids are going home after a long day in the classroom is this boring useless "a time for eduction". I would be surprised if more than 50 kids listened to it. Then Sat when there should be fun music we have the same old Junknoo talks with the same subjects being discussed week after week. As for TV -that's a joke and most citizens and residents watch cable or Netflix. Time for a great change.

Amen to that!!! ........ I trust that William Thompson, Diana Swann and Andrew Burrows have already cleared out their ZNS offices ........ They were disgraceful PLP operatives at the "people's station"

ZNS has become a national embarrassment. Time to privatize.