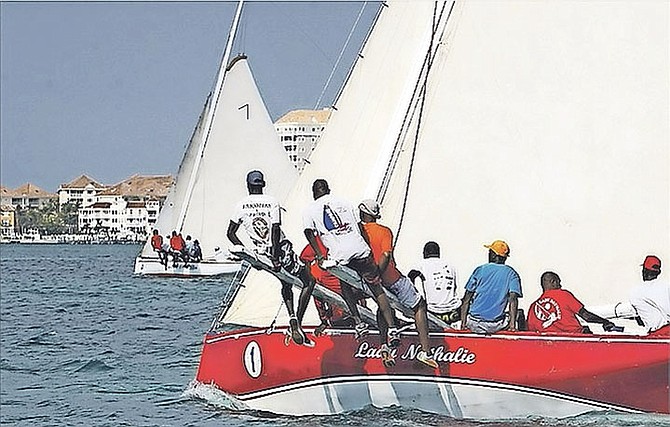 The Lady Nathalie and crew in Montagu Bay during the Sir Durward Knowles 100 Regatta over the weekend.

Eleazor 'the Sailing Barber' Johnson can now breath a sigh of relief.

Johnson was upset over the weekend after his B class Lady in Red Lady Nathalie sunk in the waters in Montagu Bay during the second race of the Sir Durward Knowles 100 Regatta.

When he got the news on Tuesday, Johnson said he wanted to "jump for joy.

"My boat stayed out in the water from Saturday and I was concerned because I didn't know when they will get it out," he added.

Johnson also thanked Sir Durward for intervening and making sure that the committee got the boat out of the water. He said he only sailed in the regatta because he wanted to show his support to Sir Durward. "I wanted to win the regatta for him, but the boat sunk," Johnson said. "I was really disappointed because I knew we had a chance to win it. I am happy that they had the regatta for Sir Durward because he's done a lot for the sport. "I know he's done a lot for me and has supported my regatta for years. I was in the boat with him at the start of the regatta in the 1980s when he showed me how to set up the buoy for the boats to sail around during the course of the race."

Johnson was referring to his 'Catch Me If You Can' St Valentine's Massacre that he has staged on Montagu Bay every February for the past 30 years.

"Every year that we have the regatta, we have gotten some assistance from Sir Durward," Johnson said. "So I didn't want to miss this regatta for anything in the world. Unfortunately, the boat sunk."

Ants Nest proved why she's considered to be one of the fastest boats in the class by winning the B title over the Tari Ann.

Johnson said he was confident that his Lady Nathalie would have been right in the mix.

At the end of the regatta on Sunday, Johnson said he was happy to hear Prime Minister Dr Hubert Minnis, in his address during the closing ceremonies, say that they intend to bring legislation to parliament to make sailing the national sport of the country.

"The people look for the regatta to come to the islands because there's no sport that can draw the crowd the way they do," he said. "I remember when there was no motor on the boats to take the people from one island to the next.

"It used to take about 21 days to travel. But we started to sail the boats in competition and that is how the regattas got started. We have regattas in just about every island, so it should be the national sport."

Johnson said it's good that the announcement came during the celebrations of the Sir Durward Knowles 100 Regatta, which was held to coincide with the two-time Olympic sailing medallist, who will celebrate his 100th birthday on Thursday.