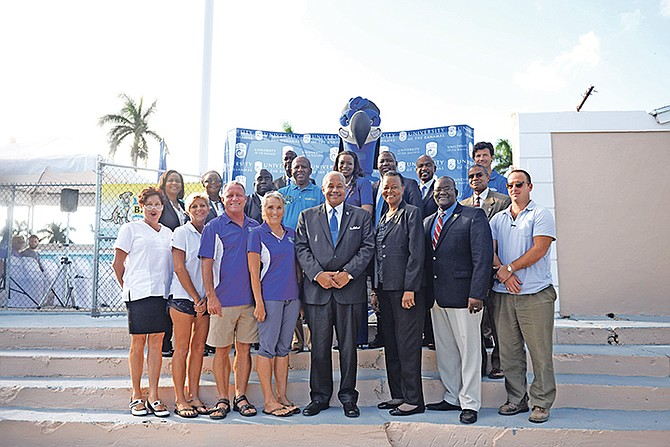 The University Of The Bahamas held a reopening ceremony for their Pool Facility yesterday in collaboration with the Let's Swim Bahamas Programme. Photos Shawn Hanna

WITH a $135,000 renovation project finished, the ‘Let’s Swim Bahamas’ programme is all set to make its splash into the new pool on the campus of the University of the Bahamas.

Knowles and his wife Nancy, who started the ‘Let’s Swim Bahamas’ programme a decade ago at St Andrew’s School, said their goal remains the same and that is to teach as many primary school students as they can to swim.

“We are trying to expand to include all of the primary schools,” said Andy Knowles, who has given up his coaching duties with Swift swimming to devote more time to the learn-to-swim programme.

“We had an opportunity to come here and to look at the existing pool and realised that there was a lot of renovations that needed to take place. So we decided to get the pool done so that we can accommodate the five primary schools in this area.”

Through corporate Bahamas and a private financial donor, Knowles said their ‘Let’s Swim Bahamas’ Foundation was able to rise the necessary funding to cover all of the expenses for the renovations.

He said they have made an arrangement with UB to allow them to use the pool to host the teaching lessons, which will be for at least one hour per day for each of the schools.

He also expressed his gratitude to the Ministry of Education, Science and Technology for agreeing to allow the students to become a part of the programme.

Gunite Pools was contracted, according to Knowles, do the renovations to the pool, which is also expected to benefit UB’s Mingoes Athletic Department.

Kimberley Rolle, the Athletic Director at UM, said the pool is a tremendous development for them as they continue on their trek to becoming affiliated with the NAIA programme in the United States.

“The facility is a plus for our student-athletes because a lot of times, our athletes will have to do their rehab in the pool and when it is furnished with a heater and covering, we will be able to use it year round,” Rolle stressed.

“This will help Sasha Ferguson, our Athletic Trainer, who have to work on our student-athletes from time to time in their rehabilitation. But it will also benefit our student-athletic population because they will have an avenue to use the pool for some of their recreational activities as well.”

Among those on hand to witness the ceremony were Bahamas Olympic Committee president Wellington Miller and Bahamas Swimming Federation president Algernon Cargill.

Smith, in his address, said the pool would certainly benefit both their students and the wider community as they engage in a supervised swimming programme on their campus.

“I wan t to thank Andy and Nancy Knowles of Let’s Swim Bahamas for partnering with us and the Ministry of Education to ensure that the pool facility is of a standing for the use of our students and surrounding community,” he stated.

Smith said UM is pleased that ‘Let’s Swim Bahamas’ has agreed to partner with them so that they can make an impact on their community.

Saunders, representing Jeffery Lloyd, the Minister of Education, Science and Technology, said the minister is pleased that the project is now complete and the young students in the primary schools can enjoy the benefits of the pool.

He said it’s critical that all Bahamians know how to swim, considering that the archipelago is surrounded by water, and he echoed the praised heaped on Andy and Nancy Knowles for the ‘Let’s Swim Bahamas’ programme.

“We totally support their goal of increasing the number of Bahamians learning how to swim,” he said. “We are also grateful to president Smith, Director Rolle of the University Athletics and all the other persons who have had a part in seeing this poo0l completed.”

Come January, Saunders said the students would be bused from the neighboring schools on a weekly basis to participate in the programme. By then, Knowles said they intend to have all of the amenities added, including the heater, bleacher and concession stand to make it a complete swimming pool to host competitions as well.

Once they have the programme up and running at UB in January, Knowles said they intend to renovate the three pools at the South Beach pools where they will be adequately used to facilitate another programme in that area.