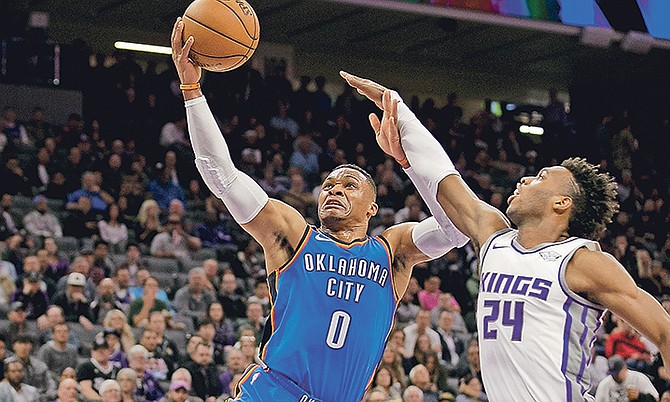 THERE may be something to Dave Joerger's "Buddy Off The Bench" plan.

Hield scored a season-high 21 points to lead the Sacramento Kings a 94-86 win over the Oklahoma City Thunder Tuesday night at the Golden 1 Center in Sacramento, California.

It was easily Hield's best shooting performance of the season, 7-9 from the field, a perfect 4-4 from three-point range and 3-3 from the free throw line in a season-high 28 minutes.

The win brought an end to a seven-game losing streak as they improved to 2-8 while the star-studded Thunder dropped to 4-6.

In the last three games since Joerger moved Hield to the bench, the second-year guard is averaging 17 points and 7.3 rebounds per game while shooting 63 percent from the field and 64 percent from three.

"I've been trying to get a rhythm all season, thank God I finally got a few to fall down. I'm trusting what I do, trusting what got me here and it was good to see the ball go down. We got a great team win and it was a great effort," Hield said, "Defensively we really locked in. Everybody made shots. It's not easy but once you make shots you can work your way back into the game. I think the guys did a great job of feeding off each others energy. The results haven't been showing in games but we have had some great practices and we just have to keep trusting what coach wants us to do. We are trying to be a gritty team that sneaks out some wins and has a shot within the last three minutes."

The Kings got off to another one of those slow starts which have plagued them for much of the season. They opened the game with a nearly six-minute scoreless drought and trailed 14-5 when Hield checked into the game with 3:337 left to play in the first quarter. After Thunder point guard Russell Westbrook made four from the free throw line, Hield made the Kings' third field goal of the quarter with his first three. He added another jumper and along with Jackson were the only Kings to score in the quarter.

Hield sparked a run in the second that would eventually see the Kings outscore the Thunder 32-16 to erase the deficit headed into the half. He made back-to-back threes on the opening possessions of the quarter and another pair of jumpers on a 21-5 run that saw the Kings take the lead for the first time.

Hield's four-point stretch in the fourth with a free throw and three-pointer on consecutive possessions gave the Kings a two-possession lead that they would maintain down the stretch for the win.

"It was a good game and a good win for us, I'mm excited for our guys. They've been practicing well and we haven't been able to get rewarded with a win. We're looking for small victories and this was a big victory," Joerger said, "A different group came in, we went to them pretty quick and they were ready to go. Buddy gave everyone confidence by his shots falling. What I really liked about Buddy in the first half is I think he was 6-7 but he got six or seven wide open looks for his teammates by penetrating and finding the open guy and making the right play."