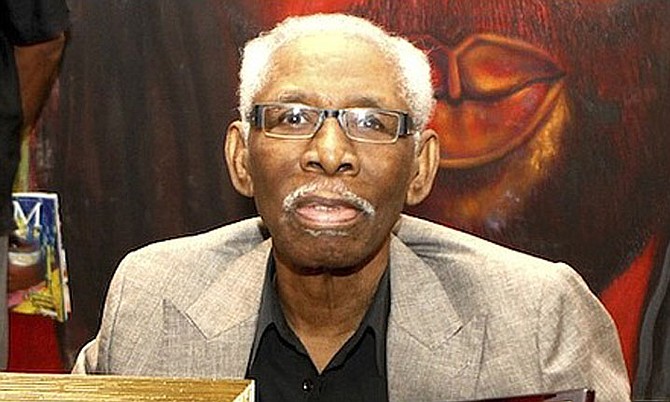 His career spanned more than five decades and spawned the hit songs "Burma Road", "Crow Calypso" and "Age Ain't Nothin' But A Number”.

In a statement, Leader of the Opposition Philip ‘Brave’ Davis described him as a “national treasure”: “Our nation's national musical treasure Ronnie Butler has passed into eternity. Now he belongs to the ages. He can sing his sweet music in heaven as he travels Burma Road on the way to the Pearly Gates.

“Ronnie Butler helped us to build our sense of national identity. Almost fifty years ago, just as we ushered in majority rule he reminded us from whence we came.

“He told us that he remembered when we used to go to high mass on Sunday with high top tennis with no socks on. That was Ronnie Butler.

“It seems that his voice has always been with us. He leaves a great legacy. I am sure all of the nation feels this loss.

“On behalf of the Progressive Liberal Party, my wife Ann-Marie and on my own behalf, I extend condolences to his family on the loss of this national icon.”

Former Attorney General Alfred Sears also paid tribute to his “friend and brother”: “A national cultural hero and patriot, who helped to shape the Bahamian identity, through his creative lyrics, wit, powerful voice and principled views.

“He believed in the ideals of the Majority Rule struggle, mentored younger artists, shared his musical gifts with the Fort Charlotte Community and the country freely whenever requested and was courageous in speaking truth to power in defence of the ideals of Majority Rule and building the cultural institutions of The Bahamas. I am proud to call him my friend and Brother. RIP.”

"Now he belongs to the ages" RIP

Always loved Ronnie's music. What a legend!
Condolences to the family on this very sad occasion. He will be greatly missed.

Comrades! If ever a body should be taken by gun carriage accompanied by an honor guard to Christ Church Cathedral for a fully sanctioned state funeral - let the public purse sprungs to honour the final send off of one our nation's most cherished son's of the soil Comrade Ronnie Butler,
Prime Minister, and Mr. Speaker, make room in the foyer of the House of Assembly, for the public to mourn and to pay their respects to our beloved Comrade Ronnie..... while loud speakers stationed all over Rawson Square plays the music and songs Comrade Ronnie will forever be remembered for by yet unborn generations.

Agree state funeral...even though I wish he had gotten a state celebration while he was alive. Simply love Ronnie, Phil Stubbs and Ancient Man

I agree 100% I guess they reserve the knighthood for the wutless politicians.

Comrade Emac, you know what's more comforting than asking some English lady to royally sword our Comrade Ronnie Butler into the realm of her knighthood - is that Ronnie Butler become who he became - because his own Bahamaland people long had knighted him and were with him early and then throughout most of his legendary musical career......and we were not alone..... Ronnie Butler's songs and music is adored by millions around the globe. The man IS simply a beautiful son of the soil. Thankfully in Ronnie's senior years. he had a longtime friend and benefactor supporter by the name Craig Flowers - because our governments never did a respectful shi#, for our Ronnie Butler. Ronnie Butler was born among the common people and he went on to perform for some 65 years for the common man's and woman's.

Loved listening to Ronnie Butler on ZNS and now the Net.

Ronnie Butler's 'You Leave' is hauntingly beautiful. There is no loss so great which our Grand Creator, Jehovah God, will not overturn and restore all to eternal life. Ronnie Butler was among the best of the best.

I will miss the godfather of Bahamian music greatly! I feel honoured to have performed with him at the Trade Winds Lounge on Paradise Island. Ronnie may be gone, but his music will live forever!

A truly great musician who will be sorely missed. His music will live on.

Remember hearing him sing many times with King Eric and Frankie Wilson in the Bar Mar way back in the day---Those were classic times---So sad they are no more!

Ronnie Butler was more than just an accomplished Bahamian musician, he was also a jealously staunch nationalist!

We can only imagine the comfort he received in his passing with the knowledge that Pillage Loot Plunder and Foreign National Movement gangs had run out of rope, and the lyrics he would have invented to forever mark their demise for future Bahamians to enjoy.

Farewell, dear friend. You will be sorely missed but never forgotten. Which is a hell of a lot more than we can say about Pillage Loot Plunder and Foreign National Movement gang of pirates!

The musicians that i admired the most were Otis Redding ,Sam Cooke and Ronnie Butler and.I
had Ronnie up there with the best of them and still enjoy his music immensely and never missed a chance to enjoy his performances. my sincere condolences his family and friends and may his soul rest in peace