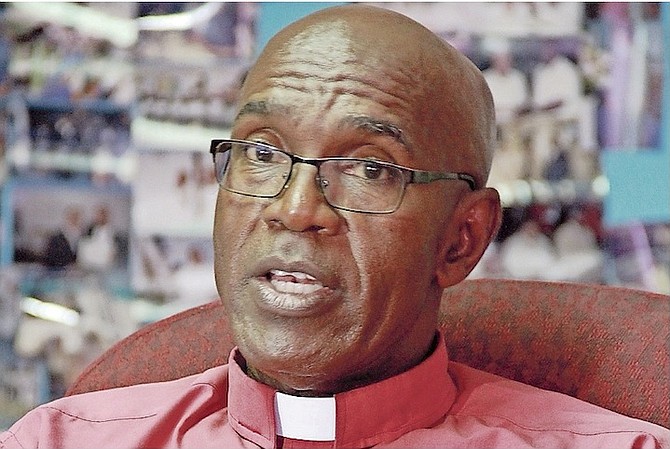 Archdeacon Palacious, who said he supports the Minnis administration’s citizenship agenda, added Dr Minnis “lacks credibility” on the matter. He also said the equivocation and flip-flopping from both major political parties on the issue in the last two decades has undermined the fight for expanded citizenship rights.

When asked by The Tribune if he thought Dr Minnis should apologise for not strongly campaigning for the 2016 referendum, Archdeacon Palacious said: “Yes, because he went lukewarm on it after a bi-partisan group was appointed. [Lynn Holowesko] along with Sharon Wilson and the FNM had already agreed to support it.

“Both of them [the PLP and Dr Minnis] need to apologise. None will, but they should.”

He added: “Most definitely the prime minister lacks credibility on this issue. He’s supporting this thing so enthusiastically now, but a little over a year ago what happened?

“He wanted me to vote my conscience now all of a sudden you aren’t leaving it up to my conscience, but you are coming out swinging and saying this is what’s going to be done?”

Although he had previously stated he supported the referendum and equal rights for women, some critics faulted him for not campaigning for the referendum and clearly stating that he wanted people to vote in support of the proposed changes.

Then-Prime Minister Perry Christie later expressed disappointment in Dr Minnis, who he thought was on board with the referendum. Last year Mr Christie said things went “hopelessly wrong” when the FNM leader told people to “vote your conscience.”

“How can you be so enthusiastically in favour of this now when you weren’t that way then?” the archdeacon asked yesterday.

Nonetheless, the Anglican leader said despite the failure of last year’s referendum, the Minnis administration has the mandate it needs to make the changes it seeks to, especially since those changes will not involve changes to the Constitution.

The archdeacon’s support for the changes are a stark contrast to that of Bahamas Christian Council (BCC) President Bishop Delton Fernander, who wants the government to respect the results of the 2016 vote. Archdeacon Palacious is the vice-president of the BCC.

“It’s appropriate for them to do this because the government has been mandated to run the country in a way that is reasonable and wherever applicable in compliance with international standards,” Archdeacon Palacious said. “I appreciate the fact that the two referendums for it failed. I give deference to what those that say do not go against the will of the people are saying, but what the prime minister is saying is that people are wrong and he should not be presiding over a country where he cannot grant citizenship with equality. “The referendum only stated that people do not want you change the Constitution, it did not say do not change the law to make it possible through some other means.”

Archdeacon Palacious also said the referendum results in 2002 and 2016 were tied to the unpopularity of the administrations at the time.

The Nassau Guardian reported last week that after Bishop Fernander’s critical commentary about the government’s citizenship agenda, Attorney General Carl Bethel emphasised to members of the BCC that the government intends to make administrative changes but not to change the Constitution.

Last week, Press Secretary Anthony Newbold suggested in a press conference that in view of that meeting, Bishop Fernander’s position may have changed.

“[Mr Bethel] didn’t change my view on anything,” the BCC president said. “I convinced him to have meetings and go out and discuss this issue with the public. But I told him I couldn’t change my position on this.”

Tell this man in a dress to sit small, practice his fairy-tale religion elsewhere, and if he really is a non-hypocritical believer, to rend unto Caesar what is Caesar's and follow the biblical dictates of separation of church and state. His 5 cents should be heard on a comedy program and not as a fake news item.

I watched the Grand Bahama Tech Expo online and heard real answers on how to fix the economy of Grand Bahama and the Bahamas, and did the news cover it? No. These so called reporters are just lazy monkeys typing on computers, and don't know real news if it were to slap them up the side of the head. Then they take umbrage to Minnis calling them sensational secretaries who don't even measure up to the Punch.

This is not news.

We don't care what these PLP them say. . .they don't care for the best interests of the Bahamian people. . .THEIR ONLY INTERESTS IS TO GET BACK IN GOVERNMENT. . .this government is on track. . .a good group of professionals. . .change is here. . .this smallness in our nation is causing "degrees of separations" problems!! People have people. . .doc weeding out the corruptions is now "touching" other peoples' people!!

I do agree with you. . .but do we want a PM. . .who is human just like the rest of us. . .who will not change his mind? It takes a strong man to change his mind after multitude of council show him he is wrong or should defer for a season!

Minnis now has his minions attacking the church.

What a sad state... to think they were just friends during the election and when it was time to reward these guys with board appointments. My how the tide changes so quickly.

The sad state here is that one of the people posting here has over four identities. No moral fiber, no truthfulness, but that was the state of the Bahamas. Hopefully we are on the way to enlightenment.

BTW, in case you hadn't noticed, the church is part of the problem and not the solution. Keeps the sheeple in line while it defrauds them.

Your facts should've been taken into consideration when hubert colluded with this gang to win the election and further appointing some of them to statutory boards.

How was there contribution to the problem not taken into the consideration by hubert then?

BFB you are nothing but a fraud. a plp boot licker. You guys have been corrupt for so long that you can't see when the government is trying to effect legitimate change.As long as Minnis keep those pastors in the trunk of the car the country can really drive forward.

A huge part of the problem.

Comrades! I'm no fan of the Archdeacon. Regardless, it won't take much explanation to predict the abruptness awaiting Minnis's removal as red party leader. Believe me those red shirts who wish to remove the man from his job - is not just Fake talk. A goner when the long-knives appear early in the New 2018 Year! .

Comrade, you are slipping! Watch the grammar and sensible sentence construction lol!

Roc wit doc is wishy-washy he calls it changing is mind. he says one thing and he does another, He does not stand by his word and who can take him seriously.? his words mean nothing Zero.

WTH This clown is talking about "credibility" after attempting to mislead the people?

James Palacious is a well known PLP apologist that nobody with an ounce of sense will waste time listening to!

Palacious needs to book his true "GOD" Perry Gladstone Christie for a church rhythm dance to fill his pews.

We know they have their pigeons planted to get their dirty agenda in motion. But Bahamians must stick together and block that negative outside influence that is trying to steer this country down the wrong path to the disadvantage of Bahamians. If Minnis was to ever tamper with the citizenship laws Or any other law) against the wishes of the Bahamian (sic) people who elected him, there would be turmoil in this country. This Bahamas will not become another Trinidad or Samolia even.

I firmly believe that those in charge of the spiritual side of our existence should remain only in touch with the spirits. Their meddling in the practical side of the living only causes dissention, confusion and bias. However, each to their own - most Bahamian followers who do so without question confuse faith with superstition even at the best of times.

@truetruebahamian: You Sound like such a Jackass! How can you save the spirit in a dead body? And common sense should tell you that those who want to kill bodies all want spiritual death also. Man shall not live by bread alone... so feed the sheep Palacious and deliver them from these wicked devils. They done had their 400 years.